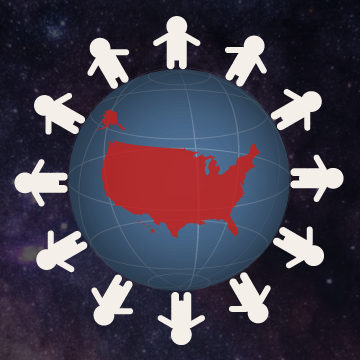 For 2020’s DisreGuardian, 40-year-old white man John O’Connor tackles the problem of white men feeling left behind due to demographic shifts in America.

Editor’s Note: The following is a satirical article written by UCSD student Steven Zhou for The DisreGuardian, which are a series of articles published annually for The Guardian’s April Fool’s issue. Features will resume publishing normal content next week.

In 2020, Pew Research Center determined that approximately one-tenth of the United States’ voting population will be composed of immigrants, the largest in national history. Workplaces that demand higher education are quickly becoming bastions of gender equality as the gender gap for educational attainment closes. The 2018 midterm elections saw the election of a “rainbow wave” of LGBTQ politicians across the country. But as the country’s demographics begin to shift to a majority-minority status and U.S. citizens begin to emphasize equal opportunity, certain segments of the country feel left behind. As white male Peter Cvjetanovic puts it, “It feels like everyone in this country has just forgotten about me. One second I could see myself everywhere. Now, the bathroom signs have other languages on them, there are people of color on every movie poster, and everyone around me keeps fawning over this Parasite and BTS crap. Something’s not white — I mean, right — here.”

My name is John O’Connor, a reporter for The Daily Skeptic, and although I’ve lived my life white-passing, I’m half-white half-Irish. I come from a unique place because I understand what it feels like to be both a minority and white in the U.S. I experience the difficulties of being stared at every few months, followed in the grocery store when I’m trying to shoplift, and stopped by the police when all I’m doing is going 90 in a school zone. I’ve seen the whitewashing of my people in movies, like when Irish icon Captain Mark McCluskey from “The Godfather” was portrayed by some random white guy. This has given me internalized racism as I can’t picture a scenario in which I find anyone other than white people attractive.

With that, speaking from a half-white half-Irish perspective, I present this ethical dilemma: Is it right to try taking away the privilege white men have in U.S. society?

This isn’t to say that I think white men are superior to other people. Again, being Irish, I completely understand the struggles minorities experience. But the rhetoric proponents of multiculturalism and tolerance use against white men in all aspects of life is hypocritical. Rhetoric like “down with the patriarchy,” “black lives matter,” and “all men are created equal” — while catchy and convenient — forget that this country was built by the minds of white people. This is a crucial fact because, as my high school history teacher from Tennessee taught me, ideology clearly outweighs labor when it comes to nation building.

Sometimes, I think about the direction the U.S. is going in and shudder. Imagine a vibrant, collaborative world where people, united by a common understanding of discrimination, actively work to understand each other’s differences. Imagine a world where people could love whoever they want and pursue whatever dreams they want without a group of people named John Smith threatening you with ostracization or violence. Imagine a world where laws that pertained to your body or your choices are written by people who sympathize with your circumstances rather than a panel of white men free from the influence of pesky hormones, race tensions, or homophobia in their lives.

If that sounds like a nightmare, then you’re not alone.

Millions of angry, white men are resisting the changing demographics across the country. And despite my minority status as half-Irish, I stand by them. Never before in history has any group of people in the U.S. had to face the amount of hatred or obstacles that white people have had to face in this country over the past few years.

The white half of me often feels left behind these days, especially at the workplace. Take food, for example. Back in the good old days, I could expect every one of my male coworkers to bring in a turkey sandwich packed by their dutiful wives.

Things have changed now. One of my coworkers, Robert Smith, constantly complains about how his wife no longer has the time to pack his lunch anymore after deciding to go back to school and getting a master’s degree in finance.

“It’s a shame. We had a system,” Robert shared. “I go earn the money, pay the bills, and mow the lawn while she makes lunch for me, takes the kids to school for me, helps the kids with homework for me, does the laundry for me, cooks dinner for me, washes the dishes for me, comforts me, listens to me, and supports me. Then she suddenly decides that she wants to pursue her dream of working as a stockbroker. It’s so selfish of her.”

Today, surveys also show that food options at work are diversifying. Instead of appreciating the privilege of being able to work in America or enjoying the beautiful scent of bread, cold cuts, and mayonnaise, people are feeling emboldened by the increasing cultural diversity. The Hispanics are eating fresh seafood tacos, the lesbians are bringing granola salads, and the Asians have the audacity of bringing home-cooked wonton soup and sambusas into our break rooms. Foods like salted mashed potatoes, Big Macs, and microwave bagel bites that were previously the epitome of white culture are being ignored and swept aside for a more colorful, flavorful platter of options. “It honestly scares me to see these people eating their weird foods,” Ronald Wilson, who owns a kiosk selling fried sticks of butter, said.

After interviewing hundreds of white men trying to get to the bottom of their inner fears, I started noticing more patterns with the concerns they had. Affirmative action regarding admissions policies often came up. “Why should I be seen differently from a gay, black kid from Mississippi?” current high school senior and prospective Harvard student Maxmillion Hampton asked. “Just because my parents went to Harvard and can call in a few favors to get me a free pass doesn’t mean that everyone else deserves a free pass too! There’s already too many Asians in the Ivy League anyways, and I know for a fact they don’t have to work as hard as me to get in.”

My nephew currently goes to the California Institute of Technology, a great school by all regards. But one look at the demographic breakdown of the school shows that it is actively trying to recruit more women into STEM and has an astonishingly high proportion of minorities. Why are we actively trying to correct the privileges white men like my nephew and I have had for centuries? If women are supposed to be in the kitchen and Asians are supposed to be in Asia, then why are we taking away admission spots from poor little rich white boys like my nephew? I can’t even imagine the emotional toll my nephew would experience if he had to go to Harvey Mudd, his second-choice school, all for the sake of equality.

Many white men also feel excluded from conversations in everyday life. The other day, I decided to watch an episode of “RuPaul’s Drag Race” after it popped up on my recommended list, and I couldn’t understand any of it. First of all, their accents were so feminine, and I generally have a hard time understanding speech when it’s not delivered by a straight, Midwestern, emotionally unavailable man. Second of all, I couldn’t get behind how these men could constantly switch back and forth between female and male clothing. If I didn’t know any better, it almost felt like gender was a social construct separate from the idea of biological sex and that people often fall somewhere along a spectrum of what we as a society have defined as “masculine” and “feminine” for some reason. But I never felt like being a girl at any point of my life! The things these people were doing felt wrong. How could someone else have a different idea of who they are than what I’ve assigned them? Why are these men not following the gender stereotypes that I want to shoehorn them into?

Perhaps the most common complaint I heard from white men across the country though was about their voices being silenced through politically correct, or PC, culture. Thomas Yeager, a student at UC S– D—-, believes, like many other white men, that, “Words like f*ggot—- and c*nt are just words! I swear, I can’t even make a joke at their expense anymore without someone getting all upset.” With the advent of the internet, people now have the ability to chastise these people despite the fact that they could very well be good people who are “not angry racists.” Yeager continued by saying, “I just want to be able to bully others without facing any consequences. Is that too much to ask from these PC princesses these days?”

Do we want a society where there is no clear ideal for people to strive toward? I have had black and Asian friends who have said they wish they were straight white men so they get further in life. Women have often told me they wish they were men so they could feel safe walking around at night. Without people like me deciding what is normal and what is not, who will Americans turn to for influence?

And what are people like us going to do if people stop listening to what we say? If being white is no longer considered an advantage, then white men will be earning the same wages for the same work. We’ll be splitting the household chores with women equally. Worst of all, we won’t be able to feel like our opinions are the only ones taken seriously anymore.

That’s a future I hope I and my fellow white brothers don’t live to see. A world where white men are somehow equal with the rest of the country is too unethical for the people who benefit most under the status quo. Hopefully, people like us can keep America great for the foreseeable future.

Note from the writer:

I was inspired to write this article after seeing increasing reports of hate crimes against Asians in the United States. It’s quite shocking how quickly public perception of the Asian community has changed after seeing it gain cultural clout in recent times. The actions of many people in this country remind me that the road to our societal acceptance remains long.

While this article tackles a heavy subject, I hope it encourages everyone to reflect upon their own personal biases in general. The Asian experience in the United States shares similarities with many other groups, and I’m hopeful we will find solidarity during these difficult times and move towards a more inclusive future.

Graphic by Allyson Llacuna for The UCSD Guardian.

9 thoughts on “DisreGuardian: The Ethical Problem of Taking Away My Superiority Over Others”