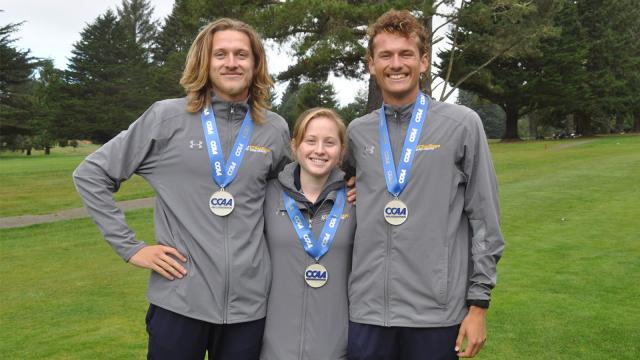 The UC San Diego cross country squad traveled to Monmouth, Oregon to compete in the 2019 NCAA Division II West Regional Championships on Saturday. The men’s team finished in seventh place, led by a third-place finish by redshirt senior Aren Johnson, while the women landed in 11th, led by freshman Samantha Rocke. The meet most likely wraps up head coach Nate Garcia’s 13th year at the helm of both teams and the last season UCSD will spend in the California Collegiate Athletic Association and Division II.

The West Regionals came after solid performances in UCSD’s last two meets, the Triton Classic and the CCAA Championships. The 27th Triton Classic was held primarily on the trails east of Eleanor Roosevelt College. In a very balanced performance, the Tritons swept both the men’s 8,000-meter and the women’s 6,000-meter events. The Triton women took spots four through nine on their way to victory; meanwhile, the men were led by redshirt senior Sam Blake’s second-place finish and had five runners in the top 10.

“We love racing here on our home course … A lot of schools don’t have that opportunity, so we love taking advantage of it,” Garcia said. “We had awesome supporters, from parents, to alums, to friends on campus who came out supporting the team, and it makes a massive difference.”

In the CCAA Championships at California State University, Humboldt in Arcata, the Triton men finished third and the women fourth. The men were led by Johnson’s third-place finish, while the women were led by Rocke, who finished 11th.

“It really exhibited our depth,” Garcia said. “We had the depth for other people to step up and fill in that gap, and carry the team to solid performances.”

Before the NCAA West Regionals, Garcia and junior Kendra Corey spoke about the team’s training before regionals.

“All of our training builds on itself.” Garcia said. “It’s continued work on maintaining their endurance, their ability to finish well, their ability to face some of the challenges of the surges that we know will happen in this race. We’re trying to work through all of the different variables they might see on race day.”

“We’ve been working really well together this season, and we’re probably the best we’ve ever been since I’ve been here,” Corey said. “We’re just going to continue to do what we do, and that makes us feel confident.There’s a few hills and straightaways [at Regionals]. But every race we’ve done leading into this has been different versions of what this is going to be.”

The NCAA Regionals were hosted by Western Oregon University at the Ash Creek Preserve in Monmouth; both men’s and women’s divisions were won by California State University, Chico, who also swept both events at the CCAA Championships on Oct. 26. The performance by UCSD was headlined by Johnson’s third-place finish in the men’s 10,000 meters at 29:57.4, just 3 seconds behind the winner, junior Joshua Litwiller of California State University, San Marcos. Interestingly, Litwiller and Johnson also finished first and third in the CCAA championships. Johnson was followed at 30:28 by Blake at 15th. They were followed by senior Tim Corvese, sophomore Brett Beattie, junior Elijah Horwitz, freshman Gabriel Reuter, and junior Jake Selstad at 50th, 52nd, 79th, 81st, 118th, respectively.

The women’s 6,000-meter event was won by a massive 27 seconds by University of Alaska, Anchorage senior Emmanuelah Chelimo. UCSD was led by Rocke in 15th place with a time of 21:09.5; she was followed by freshman Caitlin Billman, senior Camille Perkins, freshman Isabelle Shepherd, freshman Ashley Faller, Corey, and sophomore Madalyne Coney in 38th, 57th, 70th, 76th, 79th, and 109th, respectively.

Although the two Triton teams fell a fair distance from contention for one of three automatic qualifying bids for the NCAA national tournament, the NCAA will grant 10 teams and 24 runners at-large bids on Monday, so the men’s team and Johnson hope to snag a spot then. As for the rest of the team, they look forward to Division I competition next season.

“We want to leave our mark, because this is our last year running in this region, and conference, and D-II. We just want to be noticed when we’re gone,” Corey said.