The first memory of a home-cooked meal I can recall on my own was at age three: a big butter Tupperware filled with Grandpa’s famous chicken soup. My parents bought me my first cookbook at six. I started making them anniversary dinners at the age of eleven. To say food is a part of my identity would be a vast understatement. For this reason, I knew that the road trip my father and I took this summer from North Carolina, back to California would have its fill of culinary excellence. My one rule: no restaurants that we can dine with at home. Pack a fork and wear comfortable clothes for this cross-country road trip, food edition.

The first stop was planned before I even went home last summer. I knew that New Orleans was where we would begin. As a history buff in my own right, I am fascinated by the rich culture of New Orleans. From its repurposed architecture to its confectionery delights, what originally was to be a few hours in the crescent city turned into a full day’s trip. I want to preface that New Orleans is where we spent most of our food money and is the most fleshed-out part of this article. We wanted to explore first, but once our feet hit the paved streets, our stomachs rumbled to the city’s beat. We ate lunch at Coterie Restaurant and Oyster Bar, a restaurant with rave reviews for their jambalaya and gumbo. The building looked like a renovated music hall, with glass doors working as windows and deep, refurbished chandeliers. From the menu, my dad got the Tour of New Orleans, and I got the Tour of Acadia. 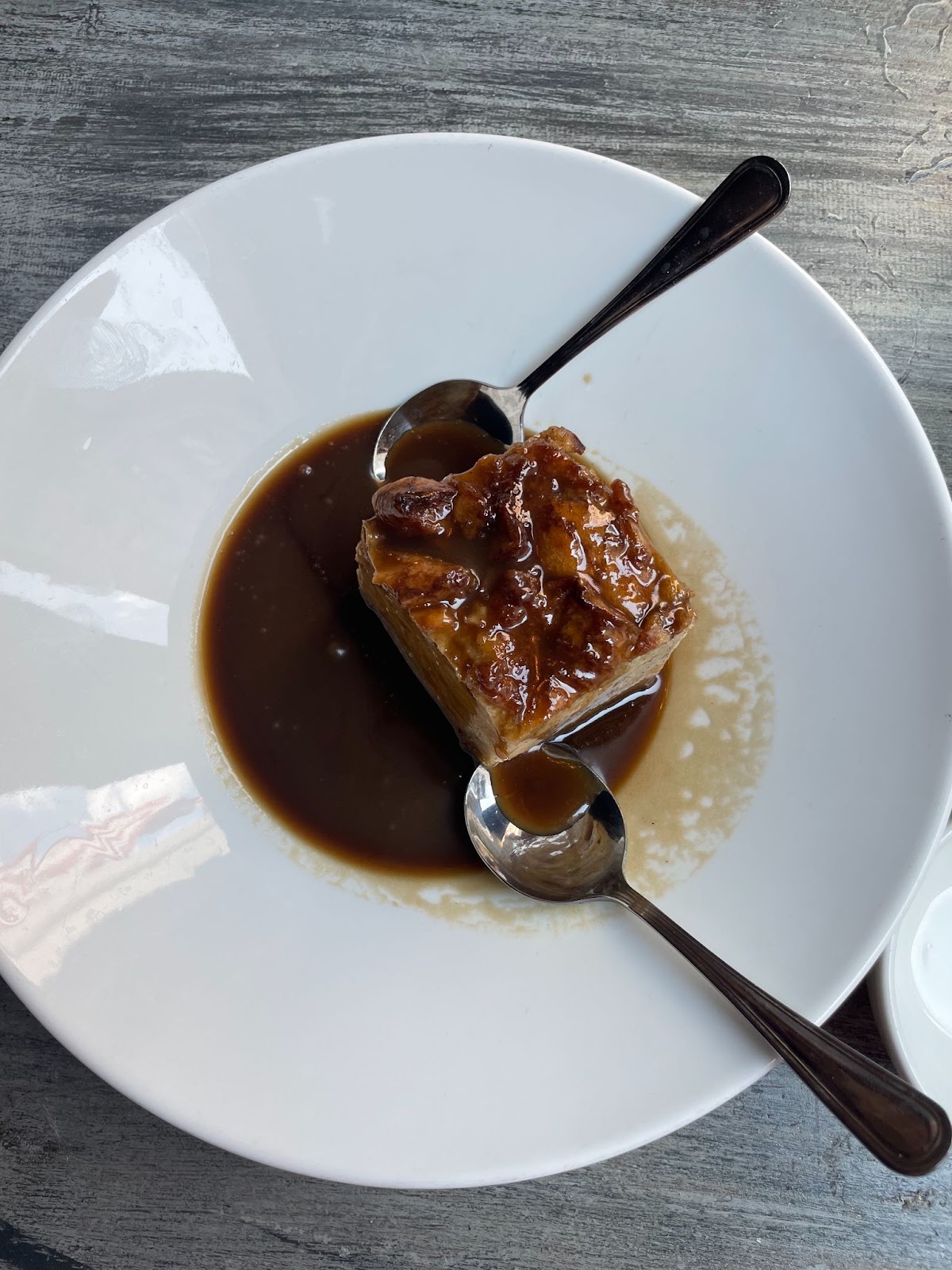 The Tour of Acadia came with a sausage chicken jambalaya, crawfish etouffee, and chicken sausage gumbo with french bread to dip. The etouffee reminded me of lobster bisque, but with the bite of creole seasoning and southern love. The crawfish were buttery and perfectly cooked. I expected it to be a little tough because it was in the soup, but every bite popped perfectly in my mouth. The gumbo’s roux had a beautiful brown color — thick but not clumpy. Paired with the french bread, I got all the smokey flavor of the liquid and then a spoon full of tender, braised chicken and peppery creole andouille sausage. The rice in both the jambalaya and gumbo retained the flavor of its braising liquid without coming out too soft, keeping the flavor in every spoonful.

Honestly, I have no complaints, and while I couldn’t finish my plate, my dad gladly ate the few bites left. I was pretty full at this point, but he saw bread pudding on the menu and knew we should order it. I’m glad he mentioned it because I can say I will never taste a better bread pudding in my life. If you have ever had cinnamon french toast, imagine that taste in a spongey, stacked, and aerated portion. Covered in a caramel rum reduction that I could easily put in my coffee every day, the buttery caramel and spiced rum married in the best way. When I turn 21, it is the first thing I want to try my hand at.

Now that we were thoroughly stuffed, we left the restaurant with my dad talking about the food for the next four hours (and after). Unfortunately, even though we were in the heart of New Orleans, nowhere had their famed frog legs that I had been wanting to try since the beginning of summer. But, I digress.

As the sun set, our stomachs were finally settled enough to try the dessert we’ve all been waiting for: those man-catching beignets that our girl Tiana made in “Princess and the Frog” (2008). 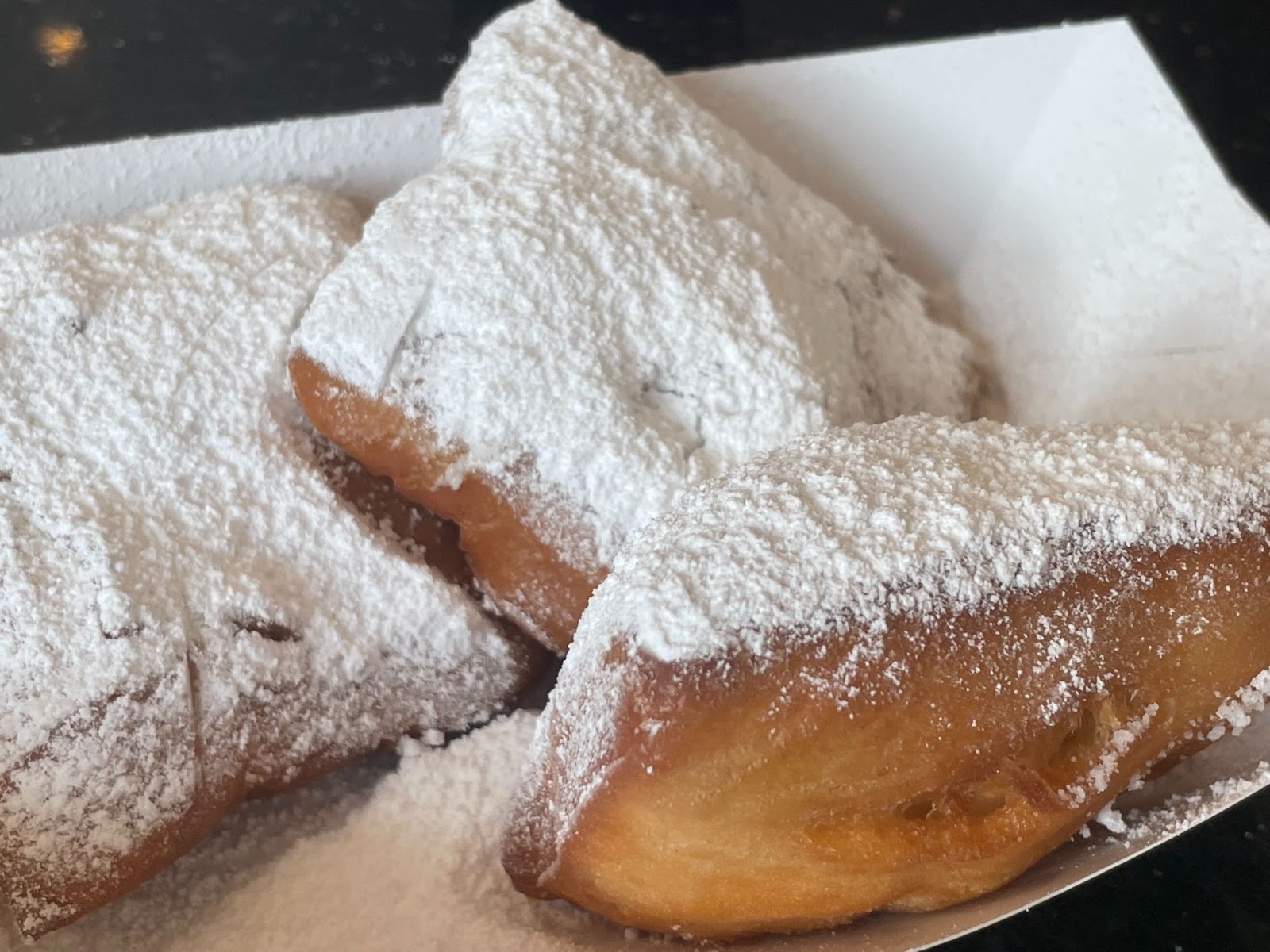 We asked a few locals which place they believed had the best beignets, and we settled on Cafe Beignet, right at the edge of the French Quarter. A lot of pages will tell you Cafe Du Monde is the best. Everyone we asked said that because the cafe is so popular, they tend to make their beignets in advance, so unless you go in the morning, there is no guarantee that they will be fresh. While I may not know if Cafe Du Monde lives up to its title, we were satisfied all the same at Cafe Beignet. The beignets were just as airy as I imagined, fingers sticky with heated powdered sugar. The taste reminded me of funnel cake. You could tell they were freshly made because you could barely touch them until the heat escaped. The only complaint we could fathom was the lack of drizzles. The only drizzle we could get was chocolate, but I think honey would have elevated the taste of the warm puff and the powdered sugar. But again, I wouldn’t say this distracted me from the New Orleans treat.

We weren’t able to eat until lunch the next day from how much food was in our stomachs.

Texas was the longest part of our drive — a whole day and a half! — but we only ate at one non-fast food restaurant. I was still fiending for some frog legs, and even though I had basically given up on my quest, my dad still made an effort to look for places with them. We found Dry Dock Oyster Bar online, and after reading the reviews, we decided to give it a shot. We both got a soup; I got the crawfish etouffee and my dad the seafood gumbo as a comparison since they claimed to have New Orleans-style food. While both soups were creamy and flavorful, I believe we were ruined by having them first in NOLA, because we both agreed afterward that we could have done without them. My dad got a shrimp po boy — something he gave up in NOLA after our bigger-than-stomach food tour. And even though I had nothing else to compare them to, I enjoyed the frog legs. 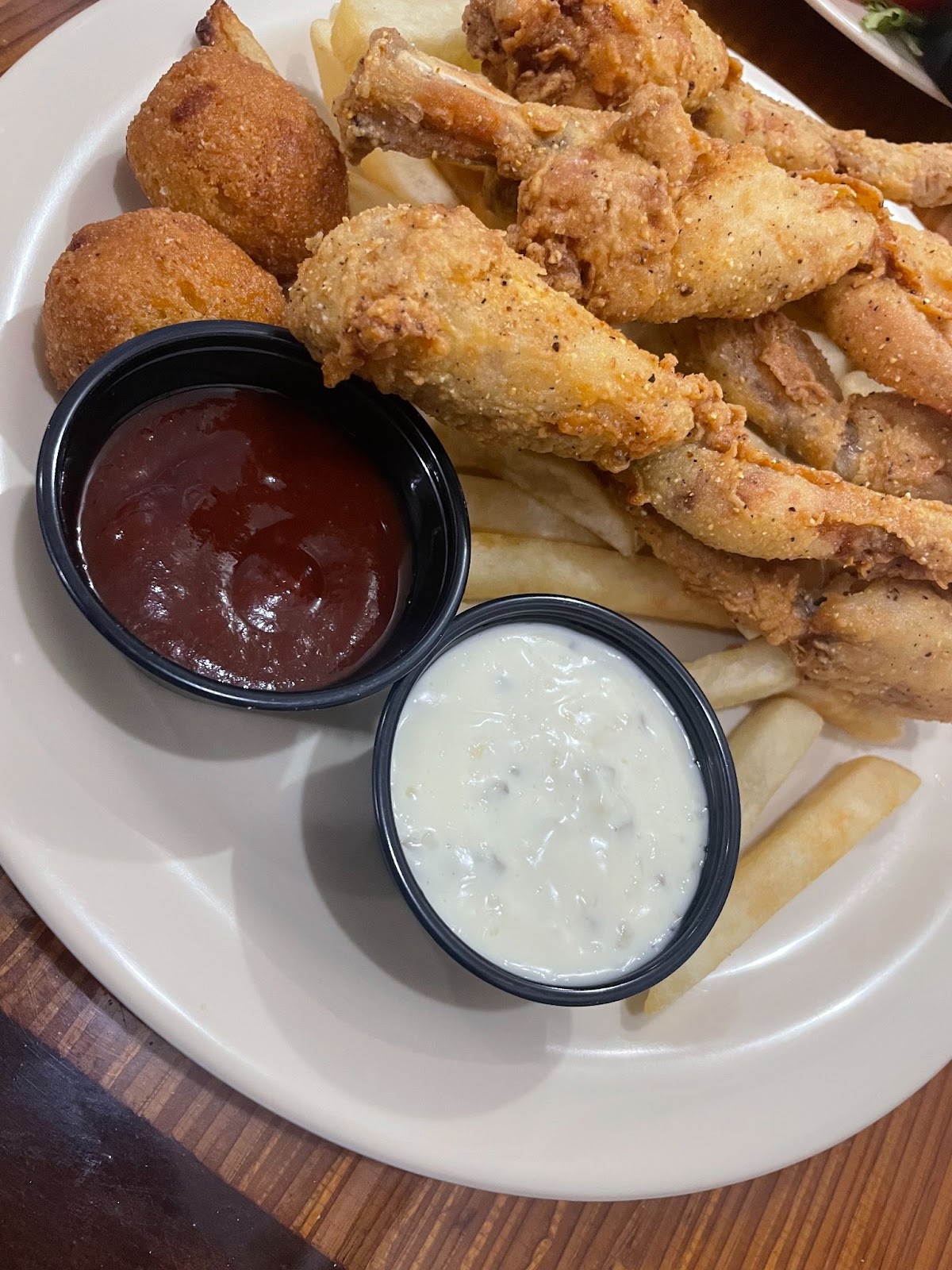 They had a light, well-seasoned cornmeal breading that crisped the meat but didn’t overpower the flavor. Unlike chicken legs, you have to take the skin off of frog legs, so it creates almost a faux skin to crunch into. A lot of people will say it tastes like chicken, and while I can see that they both have a similar base, I would say the frog meat had an earthy taste — kind of like tasting the difference between catfish and whitefish. The meat itself also had a smoother texture, lacking the cartilage of a chicken bone which made it a little more enjoyable to eat. I have to give a shoutout to my dad because if he hadn’t kept looking after we left NOLA, I would still be ignorant of the “tastes like chicken” debate.

The only thing we were upset about almost missing out on were the famous New Mexican sopapillas. Because we only had to drive through a sliver of New Mexico, we weren’t able to stop to get them. However, we were determined to find somewhere in Arizona that sold them. We settled on Goyitas, a small, New-Mexican-owned restaurant right in the heart of Tucson. Out of everywhere we ate, this place was the most disappointing. Not because of the food, but because of the price. We took advantage of their happy hour menu, where I ordered mini chimichangas, and my dad ordered loaded tacos. The chimichangas were the better of the two, lightly fried and filled half with beef and half with chicken. 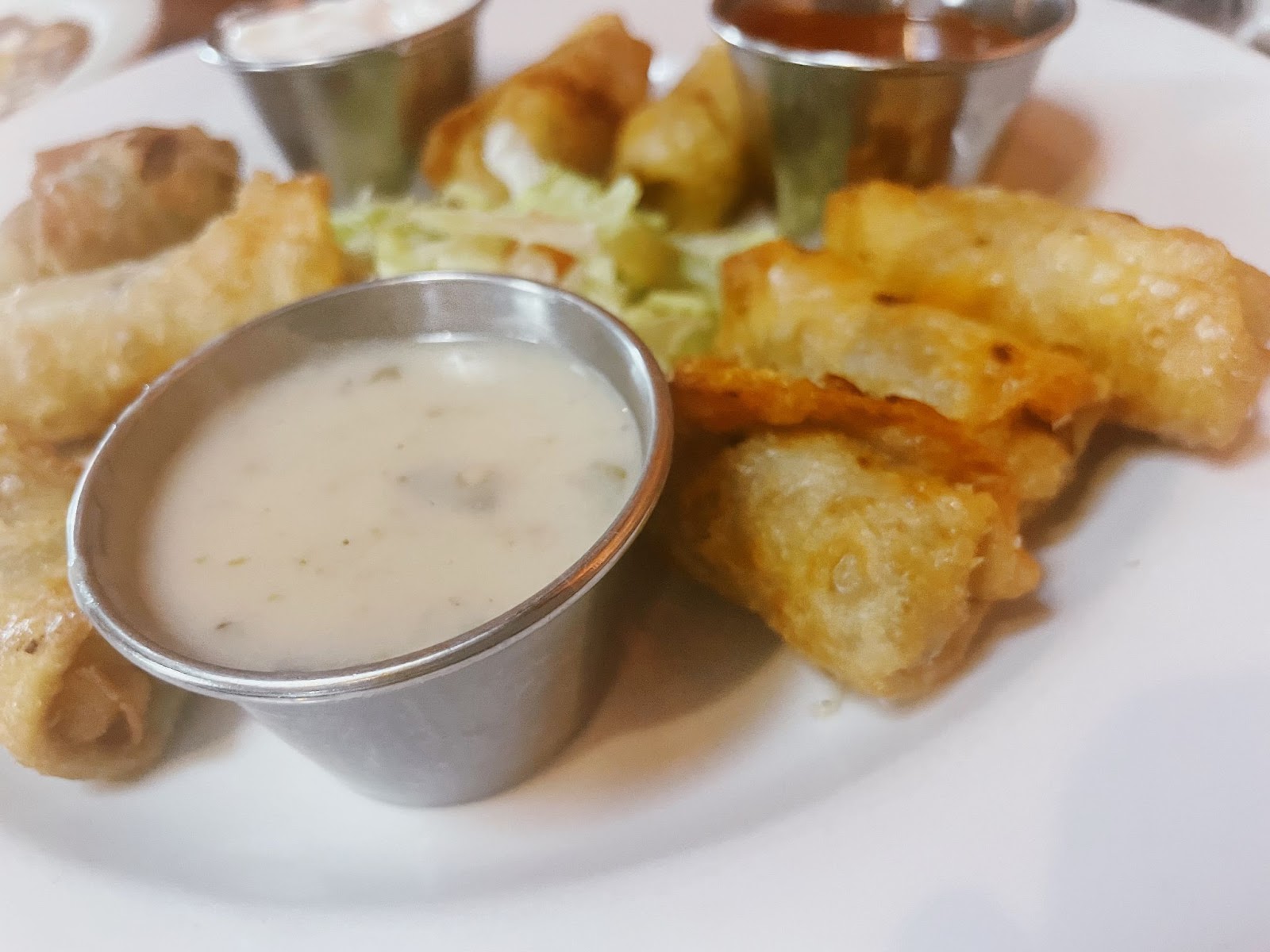 The disappointing part was that none of their meals came with sopapillas, and each one was almost 4 dollars, a steep incline from what we had paid last year in New Mexico. But, they still were just as airy and came with a side of honey as we were hoping, so overall we weren’t upset that we got them. For it to be the main reason we went, though, I admit to being unsatisfied after our meal.

Arizona was the last stop we made before making it to San Diego. I have spoken a lot of the restaurants we ate at while driving cross-country, but I do want to make a few shoutouts to the non-restaurants we stopped at along the way. As I mentioned before, my one rule was that we did not stop somewhere that we could go back home.

We knew while in Texas we needed to stop at Whataburger. Because of the Hatch New Mexican Chile Festival the week prior, they had a promotional burger with Hatch green chiles that I immediately snatched. One surprising stop we made was in Birmingham, Alabama. I’m not sure how popular Milos is on the west coast, but in the southeast, it is one of the most popular tea brands in stores. So imagine our surprise when after we made a pitstop at Walmart, as we exited the parking lot, a big neon red sign exclaiming “Original Milos” sat across the street. We knew then that we had to stop and compare their store-bought Arnold Palmer to the restaurant. I’m here as a witness to say that their Arnold Palmer had the exact blend of sweet and sour we were used to. I would even say it rivals Cane’s Arnold Palmer, if that says anything.

The last place I want to mention before I turn off the ignition is a boba shop in Katy, Texas (Dad, if you’re reading this, I am about to expose you). He was looking for a coffee shop and asked if I wanted boba. Obviously, I will always say yes to boba. We stopped at Long Coffee, where he got a Vietnamese Coffee — no boba — and I got a tropical SnoBall — strawberry, coconut, and pineapple, with boba. Before this interaction, he would swear up and down that he didn’t mind the drinks, but he wasn’t a fan of the tapioca pearls. But after he tried my drink, his new obsession was finding boba places, and with each new drink,  started adding the little fifty-cent balls. I won, but at what cost?

At the end of all this, I will still say New Orleans was my favorite food throughout the trip, but there wasn’t a place where I felt the food was unenjoyable. If any of you ever have the chance to take a road trip or travel to a new area, I encourage you to set aside a budget for local eats. Not only do you immerse yourself in the culture, you contribute to the local economy you are visiting, helping them stay afloat for years to come.

One thought on “What I Ate Road-tripping Back to UCSD”