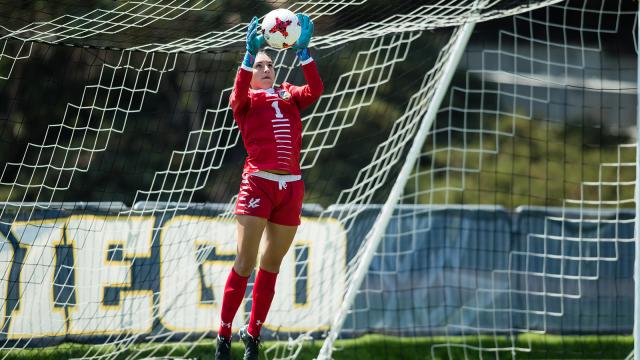 The UC San Diego women’s soccer team (8–0–1, 3–0–1 conference) kicked off their seven-game conference homestand with a 1–0 defeat of the California State Polytechnic University, Pomona Broncos (5–3, 1–1 conference). Thanks to a stifling defense that only allowed four shots, all the No. 2 Tritons needed was an expertly placed 24th-minute free-kick from freshman midfielder Mika Celeste to get a win.

UCSD’s defense was smothering in the first half, allowing just one shot. On offense, one of the better chances of the half was set up by redshirt senior midfielder Natalie Saddic, who cut through traffic before playing the ball towards redshirt sophomore midfielder Kameryn Hoban, though Broncos sophomore goalkeeper Sydney Williams reached the ball first.

However, the Tritons struck the back of the net minutes later, as Celeste deftly arced a free-kick from just outside the box into the top left corner of the net before Williams could even react. “We talk about it a lot, that early goals change everything,” UCSD head coach Kristin Jones said. “It was a special one tonight. Give Mika all the credit in the world.”

The goal was Celeste’s third of the season, tying her with Saddic for the team lead.

In the second half, Cal Poly Pomona applied more pressure on offense as they sought to equalize. Their best chance came in the 55th minute, as the Broncos outnumbered the Tritons on the counterattack; but redshirt freshman midfielder Sophia Bruno was able to redirect the attack outside until reinforcements arrived. Despite the building tension, the match finished without much threat of an equalizer.

The Triton defense allowed few Bronco chances, requiring redshirt senior goalkeeper Angelica Ramos to make only one save. But UCSD had offensive struggles as well: “To Pomona’s credit, they were very organized and took away options that we usually have when we build our attack,” Jones said. “We were forced to play the ball into space more than we want.”

With the win, UCSD continues its unbeaten season, with only a double-overtime draw against California State University, East Bay preventing them from perfection and a tie with Sonoma State University atop the California Collegiate Athletic Association.