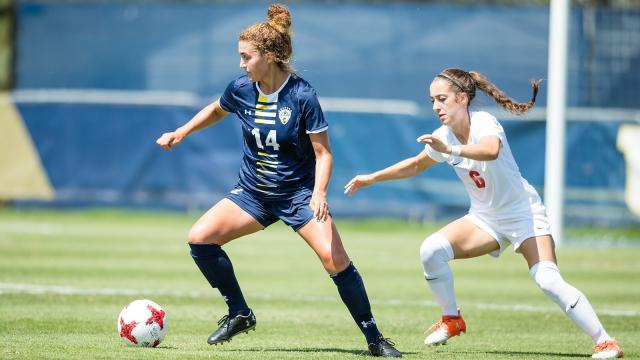 UC San Diego soccer has been one of the top athletic programs since the school became a member of Division II 20 seasons ago. Now, in UCSD’s last season in Division II, the women’s soccer team will have a new head coach, Kristin Jones, who is a veteran coach for the Tritons but has never headed the team officially until this season. The UCSD Guardian’s Praveen Nair got the opportunity to meet with Coach Jones at practice this week to discuss the current season and the future of the team. Here’s what was said.

PN: What would you say has fueled the hot start?

KJ: We’re one of the most fortunate teams in the country, getting our starting back four back. Three of them came back for their fifth year, and just having that consistency to build on while we were trying to figure out everything in front, gave the other players a little bit of confidence knowing that defensively we were such a strong unit. So it’s allowed us to mature in those offensive areas a lot quicker. We’ve always just said that getting the freshmen as acclimated to being part of UCSD women’s soccer as quickly as possible allows the team to make huge strides. And the team has done that; the team chemistry so far has been really good, and the excitement is there. There’s a lot of factors that go into being successful, and we’re just happy to be where we are.

PN: How does it feel personally to start your first season as head coach 5–0?

KJ: It would be hard to say we weren’t a little bit nervous going into it. I’ve been part of this program now for 20 years, and knowing the success that the program has had is something I take a lot of pride in. Beforehand, just reflecting on what it’s taken to get there over the past 20 years and understanding what we’d like to hold onto, as well as what we’d like to tweak in the new era of me taking over, but I’m pretty happy with where we are so far. Some of these early games are the hardest games for different reasons, so just getting 5–0 was our team goal to finish this non-conference [stretch] 5–0, and we’re there.

PN: Do you or the team place any stock in the No. 1 overall national ranking?

KJ: Last year when it happened it was the first time in a long time that we had gotten one, so it was something that we wanted to address and celebrate. This year, it was something that we acknowledged, but more as a motivating factor to stay up there. We lost that No. 1 ranking within the first couple weeks last time, and so we just wanted to make sure that we’re up there a little longer. But in Division II, the regional rankings are what matters most, so we’re just making sure we do what we need to be No. 1 regionally. But it wouldn’t be fair to say that we aren’t happy that we’re No. 1. It says a lot about where this program has been, and what these players have done so far.

PN: Do you think other teams approach the matches differently when you’re No. 1?

KJ: I do, but we’re used to having the target on our back, and it’s those situations that we thrive in. But in our away game this last week, they were making reference to the fact that we were No. 1 in the nation. I think it’s a little bit of an extra motivating factor for the teams we’re playing against, but I think it does bring out the best of us as well.

PN: Looking ahead to conference play, does your team approach matches differently? Is there anything you’re tactically planning for?

KJ: The CCAA schools – everyone’s getting better every year, there’s more parity in the conference. When it’s a conference game, we do have extra ability to scout some opponents, so we know what programs are all about. But we also know that every year, teams change, whether it’s coaches or just rosters in general. Trent [Painter], Greg [LaPorte], and our whole staff have done a really good job of scouting opponents beforehand, but with that said, they have the ability to scout us, too. So it does change things, and everyone’s more prepared going into it. But we know that due to our success in conference [play] the past three or four years, we have this target on our backs and it’s going to be there again.

PN: What would you say are your goals for finishing this season out?

KJ: I was an offensive player myself, but I do think that defense wins championships. So we’re just making sure that we stay as compact and organized defensively as possible. It just allows the offensive players a little more freedom to be soccer players, and not overthink it or worry about making mistakes. I think we’ll just build off of what we are. We’ve said all along that if this is the best soccer team we are, at this point in the season, that’s not going to be good enough in the end. So we’re just constantly all over the field looking to improve.

PN: Next year, your team transitions into Division I. Is that something you’re thinking about right now?

KJ: During the season, we’re just focused on what’s at hand. In the offseason last year, we were thinking ahead slightly. But we’ve noticed that our freshman class this year are phenomenal players and phenomenal athletes, so we saw that happen a bit naturally. I think we have the tools here – we only graduate three after this season, and so the tools are there to start on the right foot in Division I. But at this point in the season, we want it not only to be about the season, but also celebrate the Division-II era in UCSD athletics and what a lot of teams have accomplished, and we’re lucky enough to be one of those teams that’s had a lot of success. So we don’t want to overlook that at all, so right now we’re just getting down to business.

PN: NCAA’s Division-I transition rules prevent your team from participating in tournament play for the next four years. Do you think that’s something that’s going to affect your team, and how do you think that changed how you look at those seasons in the transition?

KJ: We thought it was going to be a bigger factor in recruiting than it actually has. Some schools have used that against us when we’re recruiting for the same player. But there’s not a lot of Division-I schools that make the playoffs in general. And in the Big West, there’s only really the automatic qualifier that makes it, and every couple of years, you might get one more at-large bid. But for us, we just measure success differently — we still will have the same goals, we still hold ourselves to a high standard. Without the playoff opportunity, we’re still going to try to do our best to win [the] conference every year. Whether or not that puts us in the playoffs doesn’t matter at this point, but it’s going to put us in a position to have the mindset moving forward that when we are eligible, that we’re ready to know what it takes to win [the] conference. So that’s our goal, and we’re just going to have to measure success a bit differently.