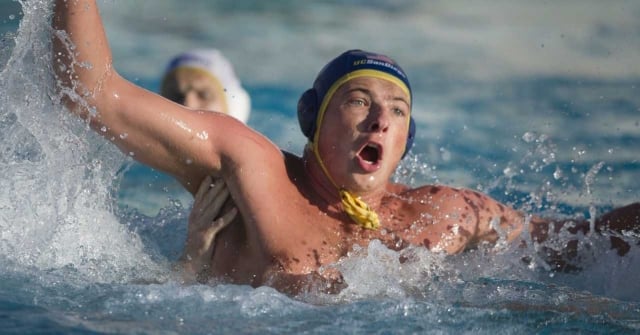 On a brisk Saturday afternoon, the UC San Diego men’s water polo team leapt into the pool, in front of a large home crowd, hoping to claim victory in its final home game against a formidable UC Davis team. The Aggies, however, held off the Tritons, defeating the home team in a competitive 12–15 game.

UC Davis struck first, taking advantage of a UCSD penalty to go up 1–0 with 6:35 to go in the quarter. The Tritons responded quickly with three consecutive points; junior Alessandro Valania, sophomore Skyler Munatones, and junior Kevin Asplund all found the back of the net to give the Tritons a 3–1 lead. The Aggies, however, were able to cut the deficit, again profiting from UCSD fouls, and end the opening quarter only trailing by one (5–4).

In the second quarter, the Aggies began to find their offensive groove, scoring four unanswered points, giving the Aggies their first lead since the opening score of the game. A resilient effort by Triton junior goalkeeper Sam Thompson kept UC Davis from running away with the score, but the Tritons still were down by two (7–9) going into the half.

Coming out of the half, the score remained tight. Throughout the third quarter, the Tritons and Aggies exchanged points, but neither team was able to take command. UC Davis maintained its two-point lead, ending the period 12–10.

Halfway through the fourth quarter, momentum seemed to have flipped in UCSD’s favor. Fresh off a score by senior Arman Momdzhyan, sophomore utility Jack Ranj stole the ball and began streaking down the pool. In a desperate attempt to prevent a breakaway, the UC Davis defender grabbed Ranj’s leg and pulled him back, earning himself an ejection.

The Tritons, only down by two points (13–11) and with a man up, seemed to be on the cusp of a comeback. Suddenly, the referee’s whistled pierced the excited commotion of the crowd. Confusion about which players were ejected caused the referees to momentarily halt play. When the whistle was blown, the UCSD bench and coaching staff exploded with shouts of anger and disbelief. The crowd was livid — one fan even shouted at the referee, “Open the rulebook, you moron!” Their outrage was entirely justified; the Triton’s advantage was quickly erased, as the defense was able to assume their positions as the referees conferred. When play was resumed, the Tritons, predictably, were unable to score.

After that, UCSD was never able to regain control, losing the game 15–12.  “It’s a game that was very physical [with] two good teams that played hard,” remarked UCSD Assistant head coach Matt Ustaszewski. “It’s a game that you have to adjust and we didn’t adjust as well.”

The Tritons go on the road to close out the regular season, playing UC Irvine in Irvine next week on Nov. 8.