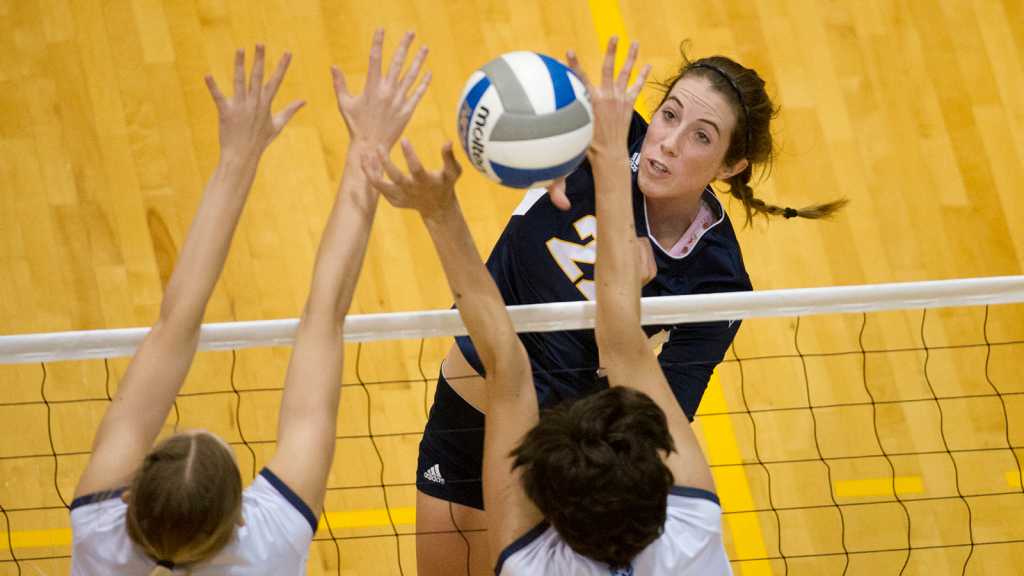 Riding in off its first five-set win of the season, the UCSD women’s volleyball team was hoping to build on that momentum and increase its win streak to three. Unfortunately, Humboldt State proved to be too much in the back-and-forth affair on Friday night, handing the Tritons a loss in the form of a 2–3 nailbiter.

The Tritons started the night rolling, scoring immediately off of a kill by senior middle blocker Meagan Wright, which would spark a 4–0 start to the set. From then on, the set truly became a back-and-forth affair, with the Lumberjacks closing in any time the Tritons took any semblance of a lead. At brief moments the Tritons would lose the lead (at the 13–14 and 20–21 marks), but after an attack error by Humboldt State junior outside hitter Alex Lolland, the Tritons would take the lead for good, culminating in a 25–22 victory.

That, unfortunately, was as dominant as the Tritons were going to look that night. With the start of the second set, the roles had been reversed, as the Lumberjacks took the lead immediately and held onto it for the remainder of the set, only allowing the Tritons to tie as late as the 7–7 mark. Despite a late three-point run culminating in a Triton junior outside hitter Amanda Colla service ace, putting the Tritons within two, the Lumberjacks would take the set and tie the game with a 25–20 victory.

With the third set opening on a three-point Lumberjack run, the Tritons looked like they had lost all momentum from their set-one victory. But the Tritons would remain close, tying up the game at multiple points before scoring six consecutive points late in the set to tie the game at 20–20. Despite losing the lead and going down by two, the Tritons got rolling again with a well-placed timeout to take back the lead with a 25–23 victory.

In the opening half of the fourth set, it was yet another close affair, with each team remaining within three points of one another. Just as the Tritons looked like they were about to pull ahead with a 12–9 advantage, however, something clicked for the Lumberjacks, as they went on an 8–0 run to take the lead for good. The Lumberjacks wound up tying up the match once again with a 25–17 set victory.

“We were up 12–9. Really, it was just us making mistakes and doing bad things.” UCSD head coach Ricci Luyties told the Athletics Department. “When you have those kind of runs where you’re just giving away the game, it’s hard to come back.”

In the final set of the night, the Tritons never led. Trailing for a majority of the set, when the Tritons were able to tie it up late at 13–13 and had a chance to pull ahead and win, they simply could not hold on. The Tritons fell for the final time 13–15, resulting in a 2–3 loss.

Even with Wright’s 21 points and Colla’s 15 digs, UCSD could not get by Humboldt State’s 18–10 block advantage and 0.169 (62–31–183) attack percentage. Still, the Tritons totaled 58 kills on their total 73 points, and sophomore libero Kayla Evans pulled off a team-high 40 assists on the night.

With the loss, the Tritons fell to 11–9 overall and 8–4 in California Collegiate Athletic Association play. Humboldt State improved to 10–9 overall and 5–6 in CCAA play. Next up, UCSD hits the road to face off against Cal Poly Pomona on Friday, Oct. 28 at 7 p.m.