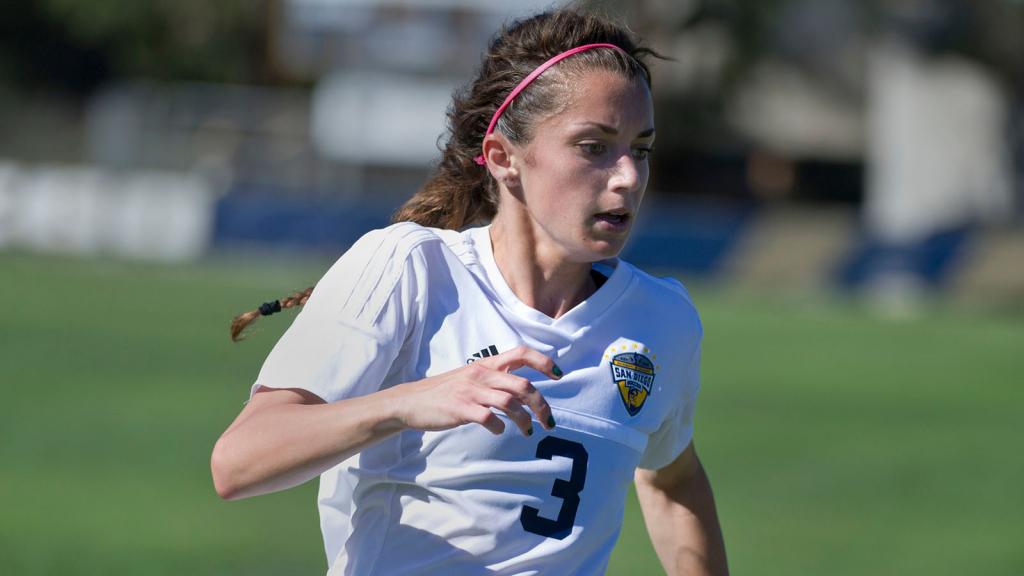 The UCSD women’s soccer team easily defeated California Collegiate Athletic Association opponent Cal State Monterey Bay 4–0 this past Sunday, Oct. 9 at the Otter Sports Complex. UCSD’s win — its seventh in a row — put the team at 10–2 overall and 6–0 in CCAA play. The Otters dropped to 4–8 overall and 1–7 in the CCAA.

UCSD outshot Monterey Bay 28–6, and that showed even in the first 10 minutes, with the Tritons shooting six times. The first goal came in the 16th minute, however, from junior forward Katie O’Laughlin. Receiving the ball on the left side, with her back to the goal, she dribbled it toward the center and made the goal from about 30 yards back. This marked the 10th goal of the year for O’Laughlin, tying her career-best from last year, and putting her in the lead for the league and entire West Region. This was the only goal from the first period.

In the 52nd minute, redshirt senior forward Kiera Bocchino received a pass from sophomore forward Mary Reilly and shot wide open from left to right to score the second goal of the game. Reilly’s assist marked her eighth of the season, the most for the Tritons.

Just three and a half minutes later in the 55th, junior defender Makenzie Brito shot from just outside of the penalty box from the right. This marked Brito’s first career goal, which was unassisted.

After this, the game was relatively low-key until literally the last minute. With just 31 seconds left, sophomore midfielder Summer Bales, assisted by senior midfielder Kristen Sampietro, made a tough-angle, right-sided cross shot to put the score at 4–0 and to put the nail in the coffin for the Otters.

Redshirt senior goalkeeper Itzel Gonzalez made three saves during the game, making this her eighth scoreless game of the season and fourth in a row. The Otters’ goalkeeper, sophomore Victoria Whyte, set a single-game record for Monterey Bay with 14 saves.

“Overall, it was a really good team performance,” UCSD head coach Brian McManus told the UCSD Athletics Department. “We got the first-half goal from Katie [O’Laughlin] but gave up a couple of chances, and if Itzel [Gonzalez] hadn’t made one nice save, it could have been a different game.”

“I felt like Friday’s game at San Francisco State played a role,” McManus said. “We were able to rest some of our key players in that one, which helped in the second half today with the big field and tall grass. Our fitness came into play, and we were able to put it away.”

This past weekend’s games positioned the Tritons at the top spot of the conference table with 18 points. Current champion Sonoma State and Cal State Los Angeles both trail with 5–1 records in the CCAA and 15 points apiece.

The Tritons play at home this weekend against Cal State Los Angeles on Friday at 4:30 p.m. and Cal State Dominguez Hills on Sunday at 11:30 a.m.