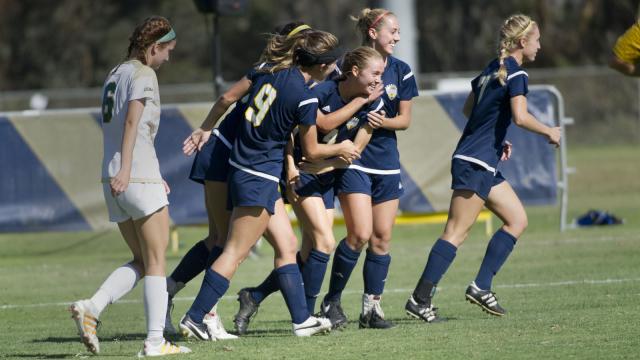 No. 8 UCSD continues to steamroll California Collegiate Athletic Association opponents, moving to 4–0 in conference after a 4–0 thrashing of Humboldt State on Sunday. The Tritons are now in a three-way tie for second in the CCAA, a mere three points behind Sonoma State, which they defeated on Friday night.

The Tritons are on a roll, bagging a fifth straight victory and moving to 8–2 on the season while establishing themselves as legitimate national contenders.

“You want to win all games even if you always go one game at a time,” UCSD head coach Brian McManus told UCSD Athletics. “Your ultimate goal is to continue to win and hopefully to be in the Regionals.”

The Tritons got two goals from redshirt senior forward Kiera Bocchino, one by senior midfielder Jamie Benedetto and a fourth by junior forward Katie O’Laughlin, all goals coming in the second half. UCSD’s early-season success is a local one, with many of the Tritons’ contributors coming from the greater San Diego area. O’Laughlin comes from Carlsbad, junior midfielder Jordyn McNutt, who assisted on the final three goals, hails from San Diego, while sophomore forward Mary Reilly, second in the CCAA in assists behind McNutt, comes from Chula Vista.

“[Bocchino] has always been capable of scoring goals,” McManus said. “And [today] she started popping up in the right positions. [O’Laughlin] always will get her goals, she popped up in the right place, right time and finished nice and calm.”

After Sunday’s game, the Tritons have some of the best performers in the league. O’Laughlin now leads the league and the West Region with nine goals in 2016. McNutt leads the CCAA with eight assists, the third consecutive season she tops the leaderboard. Reilly is second on that list.

After an even first half, UCSD did not wait long to take the lead. Just 14 seconds into the second half, redshirt senior defender Meghan Berry got the ball at the kickoff and sent it deep to Bocchino on the left side. Bocchino send a low cross into the surface, with Benedetto sending the cross in from the far post.

Just a mere five minutes after, the Tritons doubled the score through a goal from Bocchino. McNutt pushed the ball on the right side of the field and found Bocchino alone in the six-yard box. Bocchino placed her shot perfectly to the bottom left corner, beating the Lumberjacks’ goalkeeper.

In a matter of five minutes, UCSD put up two more goals on the board. On the third goal, McNutt again found Bocchino. This time, McNutt’s cross found Bocchino outside the box, and she curled her right-footed shot into the upper right corner.

UCSD put the nail in the coffin at the 57th minute; O’Laughlin scored her first goal of the game on McNutt’s third assist. Again working on the right side, McNutt threw the ball to Reilly, who crossed to O’Laughlin. O’Laughlin’s finish was surgical, on the ground to the near post.

“I have been so impressed with the goal scoring,” Benedetto said. “We always score goals, no matter what.”

Although the first half concluded on a 0–0, there were opportunities for both sides. On a one-on-one off a breakaway counterattack, redshirt senior goalkeeper Itzel Gonzalez denied Humboldt State’s freshman midfielder Alex Jenkins. Another big opportunity came at the 37th minute for the Lumberjacks, when a shot hit the crossbar and bounced into the feet of HSU’s sophomore forward Jacquelyn Dompier. Again, Gonzalez made a decisive save and denied the Lumberjacks their first goal. At the 38th minute, UCSD provoked a penalty off a handball from HSU. UCSD missed the penalty and went into halftime tied with the Lumberjacks.

“At halftime, we talked about what we needed to do,” Benedetto said. “We all knew it was possible. We always struggle to score early [against Humboldt]. I don’t know what it is, but we finally scored in the second half and solved the problem.”

Gonzalez finished the game with three saves and a sixth individual shutout, the second shutout in a row for the Tritons.

The Tritons go back on the road next week, playing at San Francisco State on Friday, Oct. 7, and at Cal State Monterey Bay on Sunday, Oct. 9.

“I think we’re capable of more than we even know, but I think we’re all looking for that national championship,” Benedetto said.