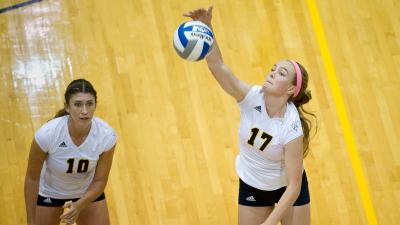 Riding on a three-game winning streak, the UCSD’s women’s volleyball team went into this week’s action with high confidence and took on northern California rivals Cal State East Bay on Friday and Cal State Monterey Bay on Saturday. Neither school was a match for the UCSD women as the Tritons made easy business out of the two, only conceding one set in the two matches combined. With a 3–0 victory over East Bay and a 3–1 victory over Monterey Bay, UCSD extended its win streak to five and remained undefeated in conference play, 5–0.

On the road, the Tritons swept East Bay with scores of 25–23, 25–20 and 25–18 with the help of 26 combined points by outside hitters senior Meagan Wright and freshman Jessyca Beksa. While UCSD has started conference play with flying colors, the same cannot be said for East Bay as it falls to a 1–4 conference record.

Wright led the team with 13.5 points, 12 kills and 11 digs all which contributed to her .312 hit percentage in a total of 32 attacks. Wright played an efficient game as she only made two errors on the night and earned her ninth double-double of the season.

On the theme of contribution, sophomore setter Kayla Evans earned a double-double off of 22 assists and 11 digs alongside junior Amanda Colla, who added a defensive spark with 13 digs.

“It was a good road win against a team that is always difficult to stop offensively,” UCSD head coach Ricci Luyties told UCSD Athletics.

Despite an efficient night, UCSD surprisingly almost lost the first set after leading 21–14; the team allowed the Pioneers to crawl back into the game, winning eight consecutive points and getting the score to 22–21. The Tritons prevailed, however, after a costly error on East Bay’s part gave them the first set.

The second set was tight as well, with the score leveled at 18, but once again UCSD prevailed, scoring seven of the final nine points to give the team a comfortable 2–0 lead going into the third set.

The momentum shifted toward East Bay early in the third set as the team got off to a 5–7 lead. The Tritons did not fold and instead responded with six unanswered points to turn it around, 11–7.  From that point on, UCSD took control and was able to get the win in straight sets.

Despite losing the first set, the Tritons showed their resiliency in winning the following three sets to take care of business in the second game of the road trip: 18–25, 25–22, 25–15 and 25–12.

“We had a terrible start to the match, but it showed we are capable of coming back even when things aren’t going our way,” Luyties said. “This kind of match is good for us moving forward.”

Three Tritons finished with double figures in kills: Wright (game-high 13), outside hitter Morgan Kissick (11) and Beksa (10). In addition to her 13 kills, Wright displayed her defensive prowess, finishing with 15 digs. She was outdone by freshman libero Lindsey Chun who led the way with 20 digs. Evans and junior setter Rachel Linden continually set the ball up beautifully for their teammates throughout the course of the match, ending with 23 and 20 assists respectively.

A successful road trip will now bring UCSD back to RIMAC Arena, where the team will host a couple of conference matches. The Tritons will look to keep their five-game winning streak alive beginning with a match against San Francisco State on Oct. 7, followed by Sonoma State on Oct. 8.  Both are set to start at 7 p.m.