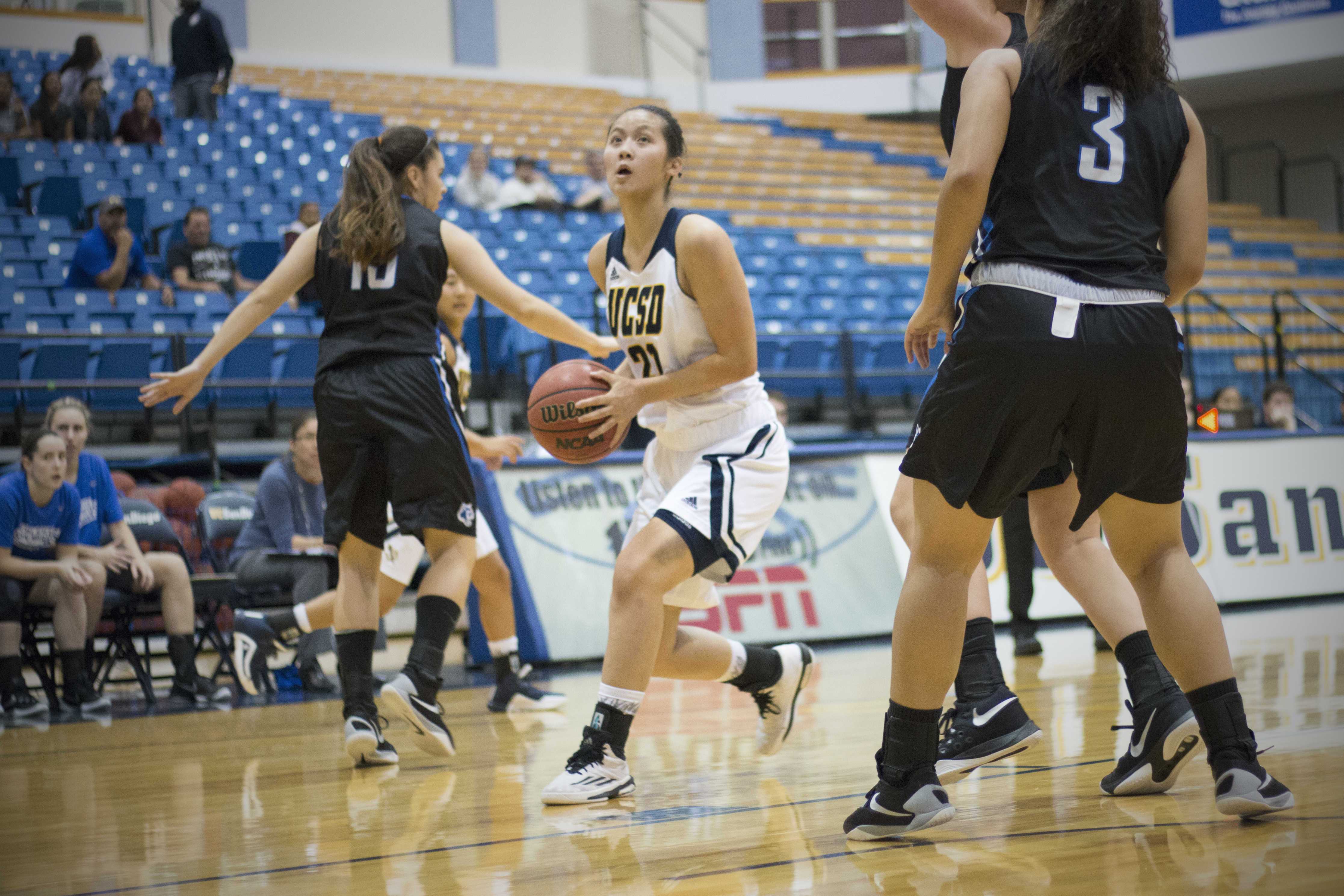 Katuna goes off for 65 points in two days to lead Tritons over two CCAA foes.

After a two-week hiatus, the UCSD’s women’s basketball team opened up their winter schedule with a convincing 85–73 win over Humboldt State. The Tritons followed that up on Saturday with another convincing 90–76 victory over reigning West Region runner-up Cal Poly Pomona. With the wins on Friday and on Saturday, UCSD now stands at 10–2 overall and 5–1 in the California Collegiate Athletic Association, good for second best in the conference.

In the dominant effort on Friday night, the Tritons never trailed and downed the Lumberjacks after leading by as much as 19 in the third quarter. After the game, Humboldt State fell down to 6–6 overall and 2–3 in the CCAA.

UCSD came out strong in the first quarter and quickly took an 11-point lead over the visitors on the back of freshman guard Joleen Yang’s and-one in transition. Up 17–6, the Tritons held on to the lead and finished the quarter on top.

The Tritons came out firing again in the second quarter with an 8–0 run to push the lead to 17 early in the second quarter. Down 29–12, the Lumberjacks inched closer, cutting the lead to only seven with three minutes left in the half. It was a quarter of runs for both teams, and UCSD put up another one, 12–2, to go into halftime without a consequent 44–27 lead.

Humboldt State came back within seven again at the beginning of the third quarter. However, UCSD answered back and continued to build on their lead. After a 19-7 run, the Tritons took their biggest lead of the game, 6512–246, to close the third quarter.

Despite Humboldt cutting the deficit to 11 to start off the fourth quarter, UCSD cruised to a 12-point win after another dominant performance, 8512–273.

The Tritons had a season-high 52 rebounds, crushing Humboldt 5212–237 on the glass, with 19 of the 52 rebounds coming on the offensive glass.

The game featured a few outstanding performances from the Tritons. Senior guard Jamie Katuna had a game-high 29 points to lead an explosive Tritons offense.

“People were setting other people up, and I was the recipient,” Katuna told the UCSD Athletics Department. “Humboldt is a very good team and exposed a lot of defensive issues in us. But these are things that we need to work on. We played pretty well offensively, but even though we did win we have a lot of stuff to learn from tonight.”

Saturday night featured the red-hot Tritons and the 2014–15 West Region runner-up Cal Poly Pomona Broncos at RIMAC Arena. After an amazing shooting performance by the Tritons, UCSD downed Pomona 90–76. With the win, UCSD took sole possession of second place in the CCAA, while Pomona dropped to 4–9 overall and 2–4 in CCAA play.

UCSD started the first quarter hot, jumping to a nine-point advantage, 20–11. The Broncos answered back at the end of the first quarter and after a 6–0 run to close out the quarter, took the lead with another 6–2 run to open up the second quarter. Up 23–22, it was the closest the Broncos could get. Behind stellar play from Katuna for the second night in a row, UCSD pulled in front again and finished the quarter on a 9–0 run to take a 47–32 lead into the break.

Continuing their offensive onslaught in the third quarter, UCSD opened up a 19-point lead, 70–51, after scoring 23 points. In the fourth quarter, the Tritons built on their lead and were up 81–58 after Mounier hit a long three. Despite the Broncos cutting the lead back to 13, UCSD handled them in the final minutes and won 90–76.

“Jamie [Katuna] came in just firing, so we just kind of took it from there,” Tanita told the UCSD Athletics Department. “Every time we get down the floor we just pass it up, and she scores. That’s pretty much what we’ve been doing, and it works.”

The Tritons had an amazing night shooting from the floor, shooting 50.8 percent (31–61) from the floor, 42.3 percent (11–26) from the three-point line and 81 percent (17–21) from free-throw line. This shooting performance was enough for the Tritons who won despite being outrebounded 39–27 and outscored 48–22 in the paint. Katuna, after a career-high 29 points the day before, went off for 36 points against Cal Poly Pomona, to go with a career-best seven assists. MacLeod had 18 points, and Tanita had her first double-double with 12 points and 10 assists, equaling her career-high from the day before.

UCSD goes back on the road this week to take on San Francisco State on Jan. 7 at 5:30 p.m. in a CCAA matchup.