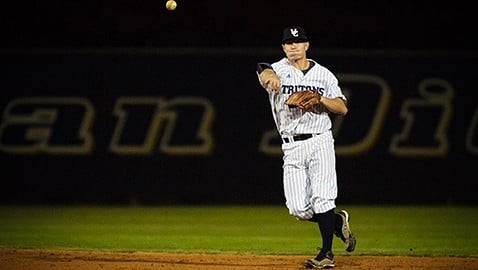 Coming off of an exhibition win against San Diego Christian this past Friday, this year’s UCSD baseball team is gearing up for the start of its season with a roster heavy with veteran talent. Among the crop of seasoned upperclassmen is senior second-baseman, Spencer Frazier.

Frazier — a human biology major pursuing a career in the biotech industry — came in as part of the 2010 recruiting class. While redshirting that year, Frazier supported the team during a season in which the Tritons ultimately won the NCAA West Region title and went on to become the NCAA national runner-up.

As a redshirt, Frazier did not see time on the field until his junior year at UCSD in 2012, where he had a breakout year receiving All-California Collegiate Athletic Association honorable mention and starting at second base for the Tritons in 42 of 57 games. That year he wrapped up the season with a strong .274 batting average in his 124 plate appearances. Frazier also led the team with 10 sacrifice hits.

“There are a lot of different things that went into me playing that year,” Frazier said. “The prior two years, UCSD had a very experienced team with a lot of juniors and seniors who had then graduated going into my junior year. I think, personally, I just grew up, after those first two years. I was more mature and more prepared to play.”

But an exceptional breakout year, followed by a string of injuries — including a stress fracture in his left shin and two separate injuries necessitating stitches on both his left and right eyelids — slowed Frazier’s advance. This all on the heels of the departure of 14-season tenured head coach Dan O’Brien.

But, if anything, this seems to have only motivated him to return to the diamond for his last season at UCSD.

“I came back because I wanted to play one more year and wanted to be a part of the team again. The way that school worked out, it was really easy. I knew I would only have to take two quarters of classes,” Frazier said.

This year, as one of the oldest players on the team, Frazier looks to lend his very varied experience to step up as a leader for UCSD.

“I have been a starter, been an all-conference player, but I have also lost my spot, sat on the bench, I have redshirted, I had to walk on to make the team. I have experienced a lot of different things and can relate to a lot of different players, which I think helps me as a leader,” Frazier said.

While Frazier prepares for the season, he is also getting ready to graduate from Sixth College with a degree in human biology and a minor in business.

“This is kind of the last stretch of baseball being one of my main focuses,” Frazier said. “I am hoping to get a job at a biotech company, to go to work trying to do something with a positive impact on the world, something that can make a difference.”

Making a difference and being involved in the community seems to have always been an important part of Frazier’s focus in school. The second-baseman regularly volunteers with the baseball team and is also part of the Triton Athletes Council, a student-athlete organization whose focus is putting on community service projects.

“Our team served food at the San Diego rescue mission two years ago,” Frazier said. “It was a very humbling experience and put things into perspective. No matter how bad of a day I have at baseball, I’m very fortunate for the opportunities I’ve had. It was also good to help them and to give back to the community and people in need.”

The first chance for Frazier to step up was last Friday night’s exhibition game in UCSD’s 4–0 win against San Diego Christian. Frazier went 1-for-2 against the Hawks, notching a triple in the seventh.

The veteran leadership is not all that will go into the team’s success this season, as a talented bunch of rookies is said to be moving up through the ranks along with some familiar faces.

“We have a handful of new guys who we are expecting big things from. Erik Lewis is a transfer from Fullerton and he played at Long Beach State a couple of years, and he will be an impact infielder right off the bat,” Frazier said. “Tyler Howsley is going to get time at shortstop and is an extremely talented freshman infielder so we are expecting big things from him, as well as many other freshmen.”

UCSD has two more exhibition games before opening its preseason on Sunday, Feb. 2, against Holy Names. The Tritons begin conference play on Feb. 8 with a doubleheader against Cal State Los Angeles.

“Until the season gets going and we start to see how these other teams are doing we have no idea,” Frazier said. “It is kind of a mystery as of now which makes it more exciting. We have no idea about the new players from a lot of the teams, so we won’t know until we start playing.”