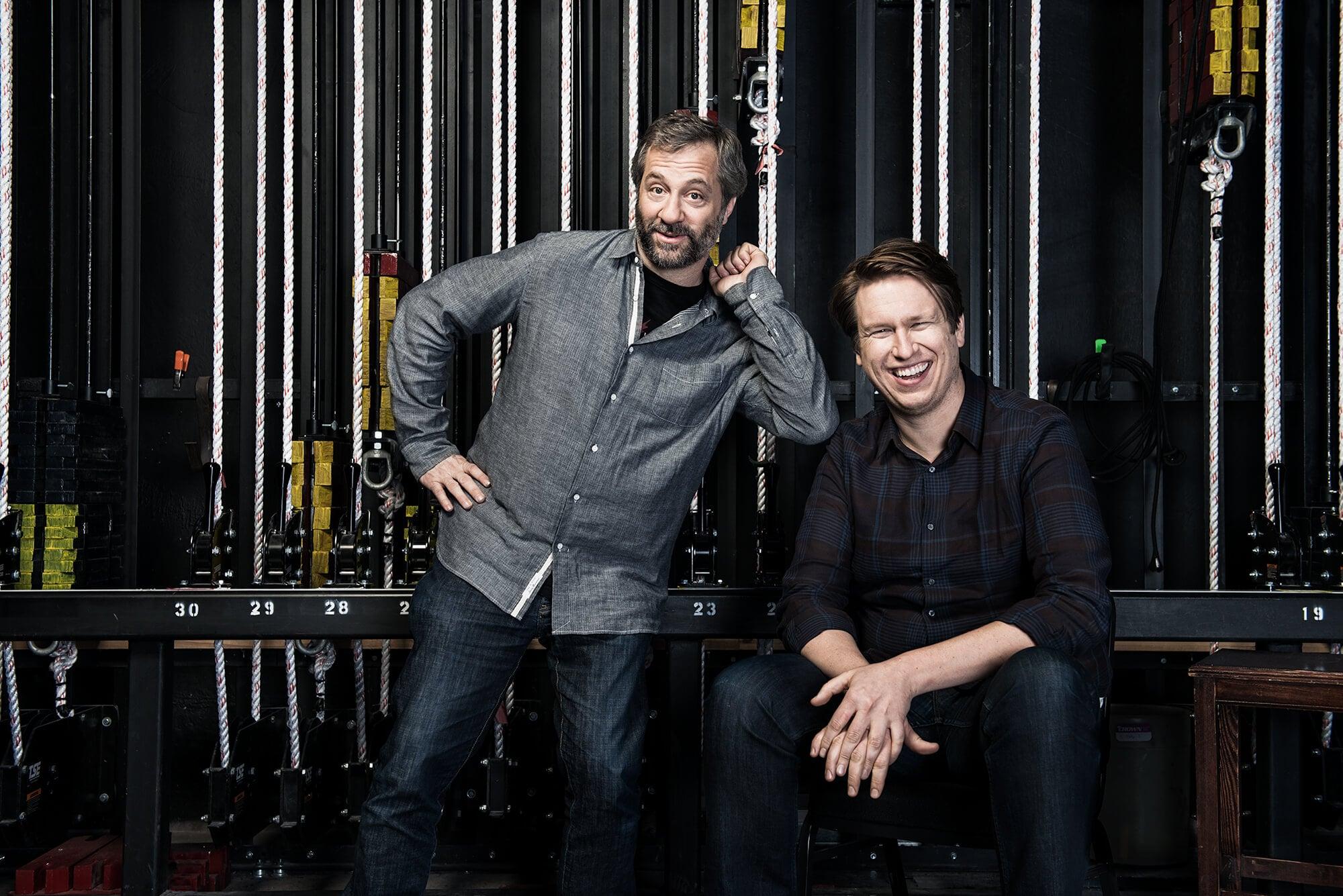 Comedy legends Judd Apatow and Pete Holmes were kind enough to grace the UCSD Guardian with their digital presence and meaty answers. Read ahead to learn how these artists — nay, modern philosophers — waxed poetic about their new HBO series.

Guardian: Many say that TV is in a golden age, with people like Martin Scorsese and Paolo Sorrentino staking their claim in recent years. Judd, you’ve been operating in this sphere since the early ’90s and film hasn’t kept you from returning decade after decade. Why do you keep coming back?

Judd Apatow: There’s a lot of freedom on television that you don’t get in film. You get to tell weirder stories that can be more complicated, and you don’t have to clean everything up to make everyone happy, allowing you to explore characters much deeper than those in a 90-minute movie. And, you’re treated well — at least by HBO. It’s not like on network TV where they cancel you and break your heart.

G: Pete, you call the show a love story to suffering. Can either of you pinpoint a specific moment in your comedic career where you believe you felt true suffering and that you later realized was integral to getting you where you are today?

Pete Holmes: Yeah, unfortunately. Or fortunately? I can think of dozens of times. I remember filming a pilot with Kumail Nanjiani — he will be in a very funny upcoming Apatow movie called “The Big Sick” — that was so bad, I smoked a cigarette after the show because I wanted part of me to die. I guess another answer would be my divorce, although that did make me funnier. I just wound up spending more time with comedians just getting better and having much more of a perspective.

G: Artie Lange and TJ Miller are the first glimpses of comedic success on the show. How did you decide which comedians you wanted to feature on “Crashing”?

PH: The fun thing about TJ Miller is that he actually reached out to me after my wife left, and he invited me to Pittsburgh. We smoked pot and went to the Andy Warhol Museum, called up a lot of room service and that was one of the things that inspired the show. When one of us [comedians] is hurt, we’re kind of like dolphins — we won’t leave them alone. Judd had a great idea to cast Artie Lange as the show’s comedian Ghost of Christmas Past, warning Pete about all the follies that lie ahead in his comedy adventure. We tried to find people who we found funny and that we could juxtapose with my character’s naivete.

G: How do you decide how much of your real-life experiences to put in the show versus situations that may be too personal or need to be exaggerated for comedic effect?

PH: I think that is one of the things I learned from Judd. In a real divorce, there are a lot of moments where you have the blinds drawn, eating ice cream and quietly sobbing while watching “Sex and the City” because every little thing just makes you sad. I can even remember how every woman I saw after that experience would remind me how I was divorced. Even if it was just a waitress at a restaurant, I would cry out, “Really, universe! A waitress?” So, those are the kind of things we had to take out, simply because they were just too uneventful.

That’s also where Judd comes in, because he is very good at taking something that is emotionally true and externalizing it. For example, in the third episode there is a yard sale which didn’t happen in real life, but the idea of having all your possessions laid out and sifted through by your neighbors is a good representation of what going through a divorce feels like. It’s about losing your privacy, being a little humiliated and getting three dollars for a framed photo of your wedding. So, that helps convey the story better and that’s what Judd would do. I would tell him something sad, like the waitress story, and he’d point to how that feels like this other thing that would work better in a comedy as opposed to a sad indie movie.

G: What do you think helps set the show apart from other series about comedians in New York such as “Louie” or “Master of None”?

JA: I think we are in the same world as a lot of those shows, but it’s really about Pete and his own perspective. Certainly, we’re influenced by shows like “Louie,” but even that show didn’t have a whole lot of episodes about being a comedian. There was that great two-parter in the last season with him on the road but there were only really a handful of episodes that showed that world in great detail. So, we felt that nobody had really truthfully shown the comedy world, certainly the open-mike night, early period of one’s career. But we’re proud to be mentioned in the same conversation as all those great shows.

G: Pete, how did your move from Christianity to agnosticism interact with your comedy career from early on?

PH: I think the biggest shift for me was no longer thinking that God was mad at me for feeling how I feel, letting me now appreciate the mystery in everything, dirty or weird. That freed me up to talk about whatever I was going through, not just what a “good boy” would talk about on stage — stuff like boners. Even as we sit here talking over the internet, I try to envelop myself in some of the mystery and that’s the main way I interact with the divine or God. I think a lot of people surrender their basic wonder and start taking this reality as a given. That’s where the energy, the vitality is. It shouldn’t be something you’re doing to assimilate with your culture, but which you’re trying to feel true joy and bliss with. Everybody can appreciate the question of what we’re doing here. Whereas before, God used to be a lifeguard who was watching me and tweeted his whistle at me every time I looked at internet pornography. I just want to sneak in an appreciation for life in my comedy alongside the boner jokes.