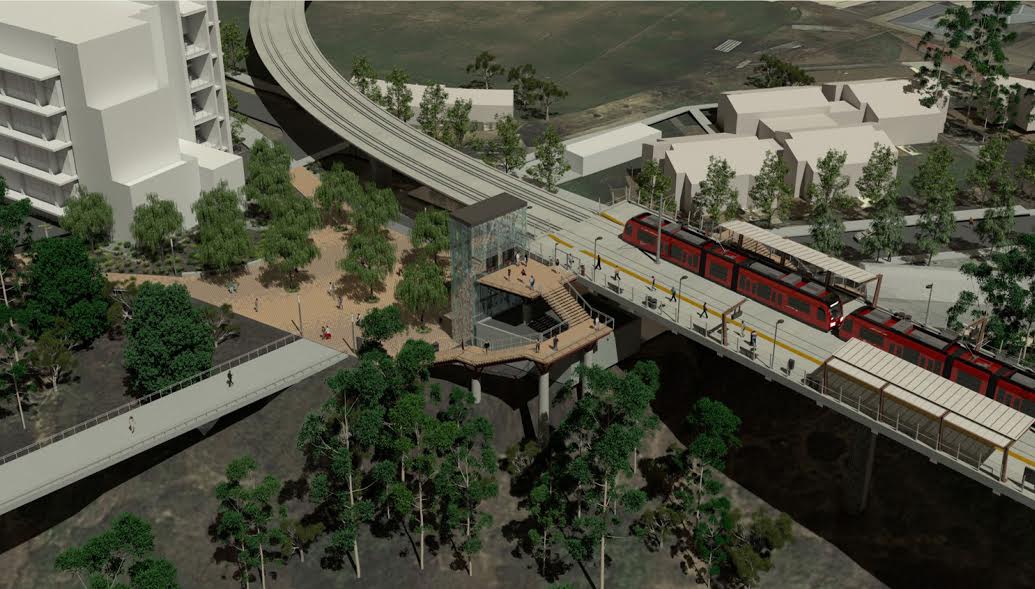 The Federal Transit Administration announced on Sept. 14 that its parent organization, the U.S. Department of Transportation, granted $1 billion to construct the Mid-Coast Corridor Transit Project, a $2.1 billion project to extend the San Diego Trolley into the University City area, including UCSD.

FTA officials estimate the new rail line will provide 24,600 transit trips each weekday, as they indicated in a recent press release. According to FTA Acting Administrator Carolyn Flowers, the extension will supplement the growing population in these areas.

“With the population along the Mid-Coast Corridor expected to grow nearly 20 percent in the coming decades, this trolley extension will offer a much-needed alternative to traffic congestion in the years ahead,” Flowers stated.

In particular, FTA’s Capital Investment Grant Program will divest the funds over the next 10 years. The FTA granted an initial $100 million at the agreement’s signing, with a yearly payment for the remaining budget subject to congressional evaluation.

Construction of the Mid-Coast Light Rail is expected to take place over the course of approximately four and a half years, with final completion in 2021. Preliminary work to relocate a number of underground utilities such as gas and water lines began earlier this spring to allow actual construction to take place.

Jim Linthicum, director of project implementation at the San Diego Association of Governments, told the UCSD Guardian that the trolley offers convenience and accessibility to what Linthicum considers a region central to companies and residents.

“The reason this trolley extension is so popular and valuable to the region is because the whole weight of the University City and the Golden Triangle has grown for the past 15 to 20 years,” Linthicum said. “It’s our second downtown San Diego as far as jobs go and where people are living.”

In addition, Linthicum stressed that the new trolley line will connect distant neighborhoods in South Bay, including Chula Vista, National City and Mission Valley, and in East County to the jobs and healthcare facilities in University City. Once completed, the Mid-Coast extension will allow commuters to hop on the trolley in San Ysidro, pass through Chula Vista and National City, and get off at the UTC mall  — all on a single trolley ride.

“If you live in South Bay and you either want to go to school or to one of the high-tech jobs in the Golden Triangle, that’s what we call a one-seat ride,” Linthicum explained. “You don’t ever have to get off the trolley.”

The new trolley line will also provide more locals with greater access to a central area of healthcare.

Furthermore, the project will help the university fulfill some of its goals to reduce waste and utilize environmentally-friendly resources.

“A college campus is what you would call a transit-dependent crowd because the university encourages more green technology and reducing their carbon footprint, and they’re really proud of that,” Linthicum stated.

Muir College junior Kristine Khieu expressed her support for the expansion to the Guardian, as commuters will have greater access to the range of cities across San Diego County, despite the potential inconveniences.

“By being in La Jolla, many of us are unable to commute to internships or volunteer opportunities,” Khieu said. “If anything, it broadens our view of San Diego by expanding our perspective to diverse neighborhoods. Of course, there will be growing pains but this will ultimately benefit the entire student population in the long run.”

Warren A.S. Senator Maedha Begur also addressed her concerns in the next five years as the trolley is built but believes the benefits outweigh the shortcomings.

“I think that, while on the interim constructing the trolley does hamper students who can’t get around, in the long term it does address the transportation problems here in San Diego,” Begur told the Guardian. “It’s a sacrifice we have to make for the benefits of something as big as transportation.”

A public groundbreaking ceremony to celebrate the Mid-Coast Trolley extension will take place on Oct. 22 at Manchester Field across from the Preuss School, kicking off the project’s major construction.

Other improvements to San Diego’s infrastructure include the development of a transportation hub at the Westfield UTC and the addition of a second track to the Amtrak Pacific Surfliner line, which will allow for train passing and double tracking.

This article was modified to clarify that the Federal Transit Administration is an agency of the U.S. Department of Transportation and to correct director of implementation at SANDAG Jim Linthicum’s name from Jim Lin. In addition, the story previously stated that one of the UCSD trolley stops will be at the VA Hospital, and its correct location along Voigt Drive has been updated. Preliminary relocation of utilities for the Mid-Coast project began in spring of this year, not last year as the article said when published. Also, the expansion will connect San Ysidro through South Bay to the UTC mall. However, the article inaccurately stated that the Trolley Blue Line serves Mission Valley when instead this line only connects San Ysidro to downtown San Diego and passes through Imperial Beach, Chula Vista and National City. These factual errors have been corrected to the online article since its publication.