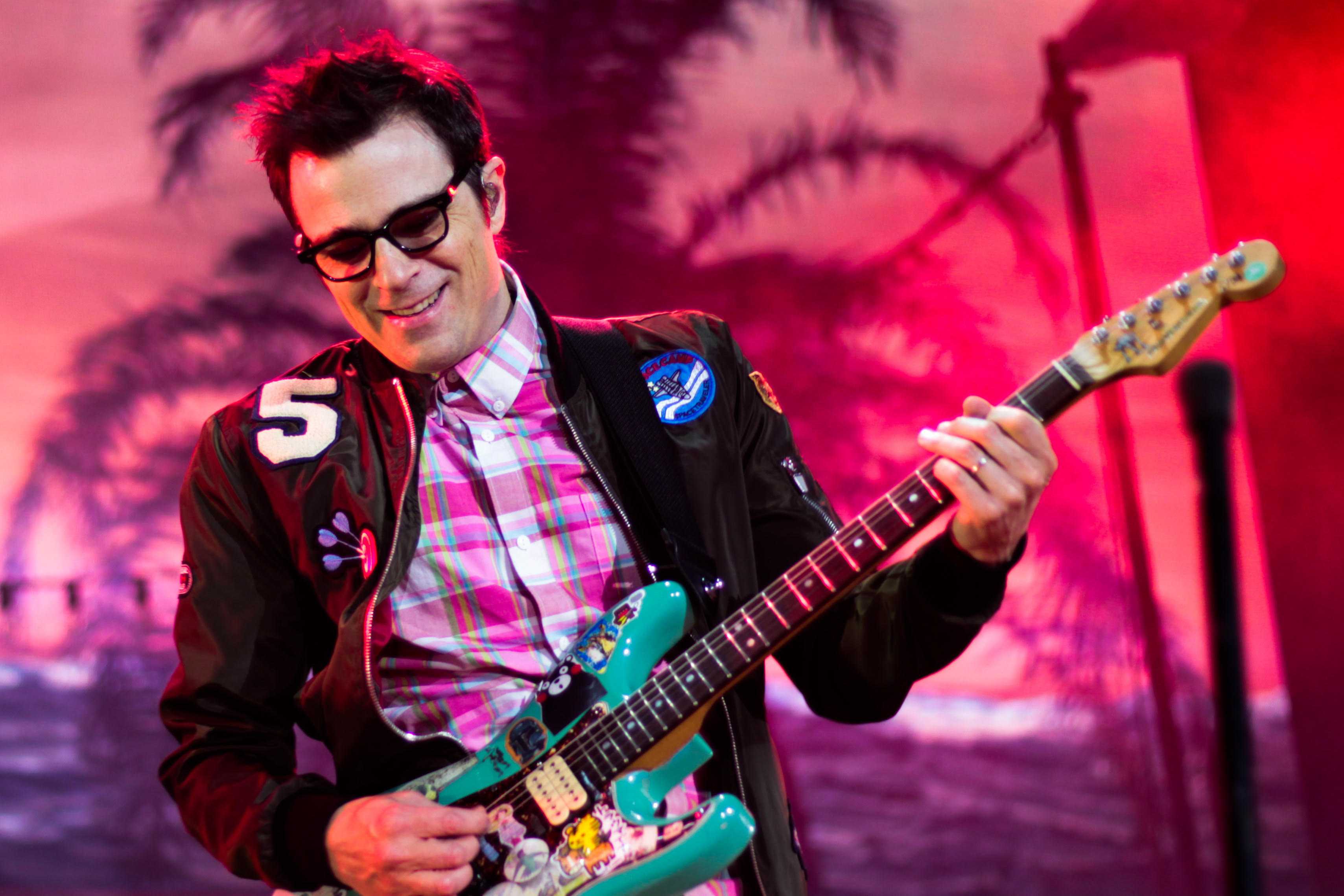 Other than the fact Weezer and Panic! at the Disco are both rock bands, they don’t have much in common.

Weezer came to be in 1992, releasing 10 critically acclaimed records, including their self-titled, triple-platinum “Blue Album,” whereas Panic! at the Disco didn’t emerge until 2005 with “A Fever You Can’t Sweat Out,” featuring the song that brought them their fame, “I Write Sins Not Tragedies.”

Despite their differences, the bands are touring this summer as co-headliners to promote their 2016 albums, “Weezer” or the “White Album” and “Death of a Bachelor,” appealing to one of their few commonalities: young listeners.

And while Weezer’s performance took the cake, both groups played extravagant sets, making for one of the best travelling shows this summer.

Chula Vista’s Sleep Train Amphitheater was filled with tweens and millennials when Panic! at the Disco kicked off the concert. The sun was setting and from behind a wall of white smoke emerged the four-piece band led by vocalist Brendon Urie. This being a group who started as a Blink-182 cover band, I expected them to pull out all of the pop punk stops. But only some were.

Their stage was something directly out of Baz Luhrmann’s “Great Gatsby,” designed to resemble the art deco style of architecture popular during the 1920s and ‘30s. Urie wore a red blazer and a slick pompadour and I realized with the release of their latest album Panic! at the Disco had turned a new leaf. This was no longer pop punk, but, as Urie described it in an interview with Upset Magazine, a brand of music that is “very jazzy, very Sinatra-esque.”

Which was fine by me.

The band’s departure from their usual sound wasn’t a disappointment as it was an unexpected surprise. Urie, who wrote and recorded the entire album alone, was perceivably passionate about this new stage in his career: he danced a lot, told anecdotes about himself in between songs (like the fact he was raised Mormon in perhaps the most unholy town in America: Las Vegas) and even did a few shirtless backflips.

It didn’t hurt either that his naturally deep voice took on the undulating registers of big-band style music with ease.

Panic! at the Disco still performed staples like “Nine In The Afternoon,” but when it came time to play the song for which their latest album is named, there was a pervasive freshness that was a pleasure to see coming from a band who leans so much on material from their past.

It was slightly upsetting to see concert goers leaving the amphitheater after Panic! at the Disco finished, and I made the assumption they were the aforementioned tweens who’d not yet gained enough musical wisdom to realize the crime in paying for a Weezer show and leaving before Weezer performed. Their loss.

With a bigger budget, Weezer’s stage was more elaborate than Panic! at the Disco’s and included a massive LED screen behind wood props that resembled the lifeguard tower on the cover of the “White Album.” They began with the heavy-hitting “Hash Pipe” as the cigarette, pistol, syringe and pill emojis swirled sporadically on the screen behind them announcing the concert would be taking a hard turn into grittier musical territory. Adhering to their newest album’s California theme, beach balls were thrown into the audience and rainbow colored streamers were blasted into the air as people began to mosh and head bang.

Rivers Cuomo, the lead singer of Weezer, is a character in every sense of the word. He seems to always be on some eccentric crusade, like when he featured the kids from “Damn Daniel” in the music video for “California Kids,” and tonight’s show was no exception.

During the first song he knocked over the mike stand, stared at it a moment and picked it up, resuming as if nothing happened. Another time he simply walked away from his singing duties, stopping the song while bassist Scott Shriner and drummer Patrick Wilson had to improv conversation with the crowd until he returned.

Later on, while performing “I Love The USA,” a song commissioned by Apple and NASA to honor NASA’s Juno Mission, he unfurled a miniature American flag to set the mood. And aside from performing in a giant sombrero or laying on the stage, when the band played “Island In The Sun,” they did so unplugged while each member wore Hawaiian leis and swayed side to side as a beachscape projected onto the screen. In large part because of Cuomo, Weezer’s performance was a spectacle.

The “White Album” was peppered throughout the set list, but for the most part Weezer played the songs we all know and love — songs like, “Say It Ain’t So,” “Beverly Hills,” “Undone” (a.k.a. “The Sweater Song,”) and “Buddy Holly.” Classic Weezer.

It was hard to believe we’d gone from Panic! at the Disco’s new and jazzy pop rock to Weezer’s pure, alt rock so smoothly. The bands don’t share many similarities, and yet when placed side by side they found common ground in their performative expertise. There was no mistaking which of the two was better, but the goal of the tour wasn’t for the bands to compete. Weezer and Panic! at the Disco complimented each other by effect of contrast.

As Weezer strummed their last chord, a second wave of confetti — so thick it was hard to see the stage — rained over the crowd. It was a show that would not be easily forgotten (making certain assumptions) and I decided Cuomo was right when, mid-concert, he said: