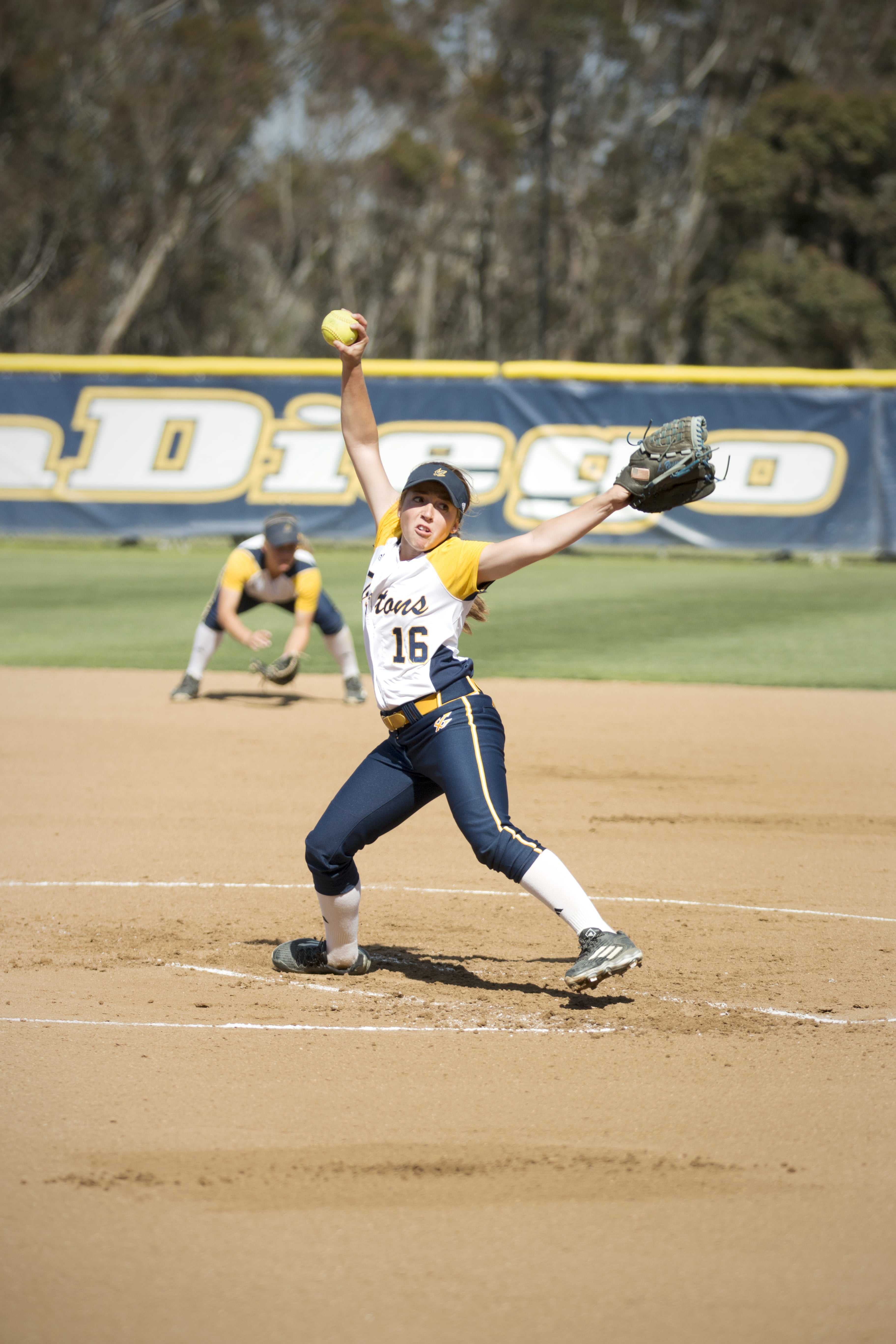 Heading into the California Collegiate Association Tournament as the underdog, the UCSD softball team hoped to turn some heads and prove that it is a legitimate contender, even against two top-ranked conference rivals. The Tritons did that and then some by going undefeated in the tournament and earning a berth in the NCAA West Regionals.

Well, as it turns out, the Tritons couldn’t care less about who their opponent is or what their record is. After what seemed like a dire situation, having been asked to play the top-seeded Humboldt State Lumberjacks, UCSD felt absolutely no fear as it came out swinging against its conference rival on Friday.

Even after quickly drawing two outs in the opening inning, the Triton offense settled down and quickly put three players on base. And sophomore designated player Emily Sklencar wasn’t about to let the moment get the better of her, drilling the the ball to right field and sending two Tritons home to earn a 2–0 lead.

The Triton defense wouldn’t let the offense have all the fun, however. Pitching against an offense that led the conference with 36 home runs during the season, senior left-handed pitcher Lexi Edwards was handed no simple task. But like Sklencar and her clutch double, Edwards felt the ice in her veins and kept the Lumberjacks scoreless for the first three innings.

As the game progressed, it was clear that the Lumberjacks were outmatched by UCSD’s offensive machine. During the top of the fourth, the Tritons sent four more players around the bases to take an unbelievable 6–0 lead over Humboldt State. While the Lumberjacks would show signs of life in the remaining innings, scoring four unanswered points to close the gap, junior left-handed pitcher Milana Casillas stepped in and shut down any hopes of a Lumberjack comeback with a final score of 6–4.

Edwards was credited with the win, allowing eight hits and four runs against the 27 batters the Tritons faced. Senior shortstop McKenna Clewett tied with senior outfielder Taylor Abeyta with two hits and one run, while Abeyta earned an extra RBI on top of that. Sklencar finished the game with two RBIs and one run.

By derailing the Lumberjack train, the Tritons handed Humboldt State its fourth loss of the season, dropping the team down to 45–4–1, with the Tritons responsible for half of those losses.

After taking care of business with Humboldt State, UCSD had a much tougher time against second-seeded Chico State. The Triton offense had a quiet start compared to its previous game, and its defense didn’t fair much better as it allowed the Wildcats to quickly take a 2–0 advantage.

Refusing to dig themselves into a deeper hole, the Tritons did just enough on the offensive side to remain competitive, scoring runs in the second and fourth innings to briefly tie the game. Sklencar made her presence known once again, hitting the first home run of her college career. However, after allowing runs in the bottom of the fourth and fifth innings, the Tritons would drop behind 4–2 by the end of the fifth.

But, based on the top of the sixth inning, the Triton sluggers didn’t forget how to score: with the bases loaded, sophomore outfielder Kelsi Maday struck gold, sending the ball into the stands to add four runs to the score. Heading into the final inning, UCSD sat comfortably on a 7–4 advantage, as it could smell a CCAA championship berth within reach. Despite allowing one Wildcat run, the Tritons closed out the match with a final score of 7–5.

Maday excelled on offense with her home run and four RBIs; Clewett led the team in hits with two, while also scoring a run. However, senior right-handed pitcher Hannah Duarte was credited with the win since she only allowed one hit and one run.“We pitched ourselves into some jams,” UCSD head coach Patti Gerkens told the UCSD athletic department. “We need to close the door. The seventh inning shouldn’t be that stressful.”

To complete its outstanding tournament run, all UCSD needed to do was beat Chico State for the second time in as many days.

Down 0–1 at the top of the second inning, the Tritons needed to score quickly to prevent the efficient Chico State offense from building a big lead. As it turns out, freshman outfielder Caitlyn Weisner knows a thing or two about making her hits count. With a player on base, Weisner made the perfect connection and knocked it out of the park to take a 2–1 lead.

The Triton defense did just enough for the next couple innings to hold the lead, forcing the Wildcats to leave a total of four players on base in the second and third innings. Afterward, the Wildcats tied the game in the fourth inning off of two well-placed hits, putting the outcome of the game in a realm of uncertainty. This could have been worrisome, especially against Chico State’s second-ranked batting average and on-base percentage in the conference.

Of course, Weisner would have none of this — first up to bat at the top of the fifth, the freshman slammed another one home to put the Tritons up for good, as the Wildcats would never score again. In the following inning, UCSD put up another pair of runs for good measure and soon called it a game with a 5–2 win.

Weisner’s stellar game was the standout on the offensive side, finishing with two home runs, three RBIs, and two runs. Sophomore third-basemen Rachel Phillips went a perfect 3–3 at bat and earned an RBI while she was at it. Clewett kept up her stellar play with one hit, two runs and one RBI. Duarte was credited with the win, only giving up one run. Casillas, Clewett, Maday and Weisner all earned spots on the All-Tournament Team, while Maday was crowned CCAA Tournament MVP.

After the loss, Chico State fell to 38–14, while the Tritons finished the tournament with a 36–19 record and earned an automatic berth to the NCAA West Regionals.