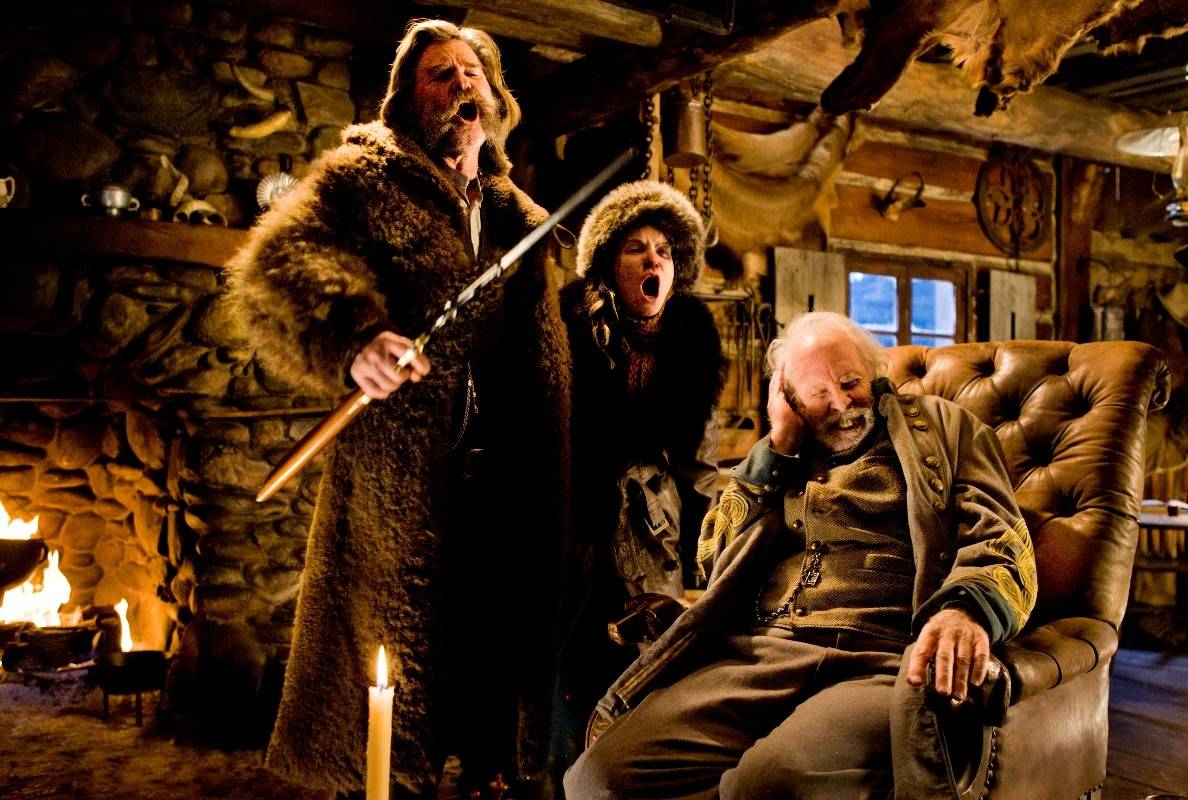 Tarantino ascends a mountain of madness and partly loses himself in the process.

A blizzard begins to rage high in the mountains of the Wyoming territory, assaulting the senses with a blinding white fog and a deafening wind. Three bodies in tow and immobilized, Major Marquis Warren (Samuel L. Jackson) — now successful bounty hunter — calls upon the kindness of a stranger in the carriage he’s stopped. Approaching the passenger’s window to ask for permission to board, he instead gets a gun square between the eyes. Skeptical of Major Warren’s story, the man inside — John “The Hangman” Ruth (Kurt Russell) — questions his motive with the assist of cold steel. John’s got a catch of his own, the infamous Daisy Domergue (Jennifer Jason Leigh) of the Domergue Gang, a $10,000 bounty. After the two men realize they’ve eaten dinner together — steak by both their counts — they are set on their way with the Major cuffed, John unwilling to let a rekindled friendship trump caution. Smooth sailing up until they find another straggler in the snow, the talkative new sheriff of Red Rock and hero of the Confederacy, Chris Mannix (Walton Goggins). We’ll soon come to know that human nature isn’t as forgiving.

The repertoire and intimacy established between the few in the first 30 minutes simply isn’t achieved by the others already present at the cabin. With strong first impressions — especially the eloquently named Oswaldo Mobray (Tim Roth) — but not much else, they seem more like fodder for our first four. Luckily, our first four characters’ lines, full of the natural charisma of their respective actors, bounce back at each other with ease. It’s a delight to simply hear whenever Major Warren, Chris Mannix and Domergue talk. Throwaway lines here wind up being funnier than most studio comedy fare. Nobody trapped in that cabin is dumb enough to believe in the misguided notion that you can trust your fellow man — until circumstances change and you must adapt. With time passing, an air of paranoia and greed starts taking hold and Tarantino’s signature lightning-quick dialogue keeps the pace in high gear. The broken promise of America and its spirit of rugged individualism melts away into surprising partnerships. However, the means of that dissolution are questionable.

“The Hateful Eight” is a break from Tarantino’s recent run of revenge stories, e.g., “Django Unchained,” “Inglorious Basterds,” and “Grindhouse” in both content and style. The protagonists in those come from a place of repression, suffering at the hands of their tormentors whether it be because of their race or gender. The violence and slurs are earned, whereas “The Hateful Eight” seems more liberal in its use of both without justification. Although it never seems exploitative, it does tip into bad taste and Tarantino’s motives come into question. The blood and running stream of the “n word” fail to materialize (more often than a Tarantino fan would like to admit) as more than EZ plot lubricant, keeping tensions feeling artificially high. Daisy Domergue may be a hardened criminal but there’s a perverse glee to the beatings she takes. If it weren’t for the constantly changing center of attention, one may even focus and see the film as a story about hot-tempered men repeatedly beating an unarmed woman in GLORIOUS 70mm.