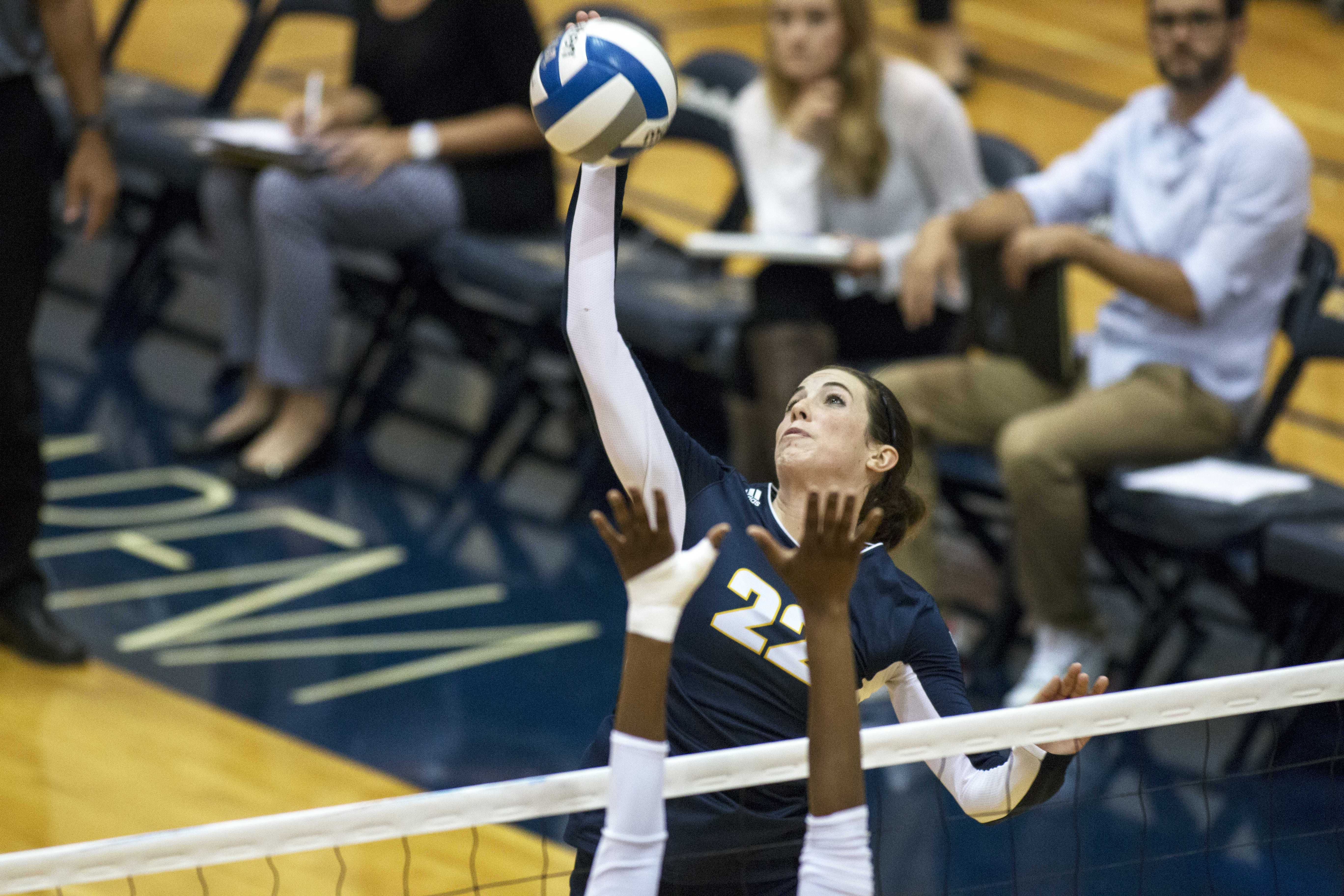 Coming in hot, the UCSD women’s volleyball team increased its winning streak to eight after going 2–0 against Cal State Stanislaus and Chico State last week and earned a spot in the California Collegiate Athletic Association tournament. The Tritons move up to 17–9 overall and remain in third in the CCAA with two games left in the regular season. Cal State Stanislaus fell to 13–9 overall, and Chico State fell to 16–11 after its respective matches against UCSD.

The Tritons didn’t have much trouble in the first set in Friday night’s game against Cal State Stanislaus. Two early kills by senior middle blocker Kameron Cooper helped put the Tritons up, and the team would never trail against the Warriors in the set, leading by as many as eight points. With the help of four kills, each from senior outside hitter Danielle Dahle and junior outside hitter Meagan Wright, the Tritons cruised their way to a 25–17 set victory.

After being down for much of the beginning of the second set, a kill by Warrior sophomore outside hitter Jocelyn Cervantes gave the Warriors their first lead of the game, putting the Warriors ahead at 12–11. The Tritons had none of this, and fought a tough slugfest of a set that culminated in a kill by Dahle to win the set 25–23.

While the Tritons went on to win the game in a three-set sweep, the third and final set wound up to be just as competitive as the second. With 10 tied scores and six lead changes, the set was a close back-and-forth affair until a kill by Dahle put the Tritons up 21–20, a lead the team never relinquished.

The women’s volleyball team moved up to 16–9 overall, clinching a spot in the CCAA tournament.

For the second set, the Tritons continued their streak of dominance. Holding a 12-point lead at one point, the team won the set handily 25–12. The Tritons’ aggression paid off, as they completely blew away the Wildcats in terms of attack percentage, holding the advantage .615 (17–1–26) to .000 (7–7–35).

“The first two sets were maybe the best the team has played all year.” UCSD Head Coach Ricci Luyties told the UCSD Athletics Department. “Chico [State] is a good team, and a win at their gym is never an easy task.”

But in the third set, the Wildcats made it a game. Despite five kills from Dahle and seven from Wright, the Wildcats never trailed again in the set after going up 10–9 off of a kill by junior middle hitter Ashton Kershner, with the Wildcats looking like a team fighting for redemption.

But the glimmer of hope would quickly go out for the Wildcats, as UCSD dominated the fourth and final set and eventually closed out the Wildcats 25–20 off of another kill by Dahle.

The Tritons hit the road this weekend for their final two conference games. They will head north to play Cal State Dominguez Hills on Friday, Nov. 13 and Cal State Los Angeles the following day.