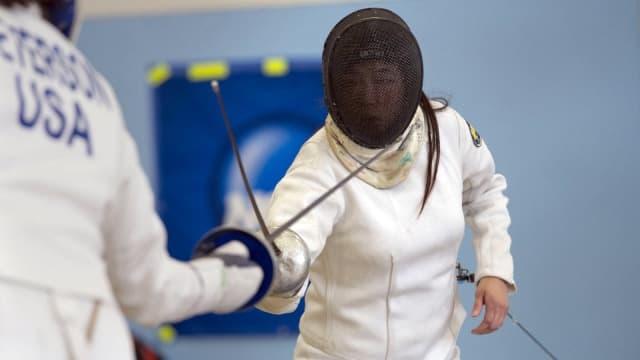 The UCSD fencing team had three of their fencers take third place at the NCAA West Regionals, and are still hopeful to place them at the NCAA championships.

The UCSD fencing team played host to the NCAA West Regional, where three of the Triton fencers earned podium finishes this past Saturday at RIMAC Arena. Alongside the Tritons, the top fencers from West Coast schools — Air Force Academy, Caltech and Stanford University —competed, as well, in hopes of gaining a ticket for the upcoming NCAA championships.

This was the second time in the past three seasons that UCSD hosted the regionals competition, last hosting it in 2013.

The 2014 NCAA West Regionals were held at Caltech last year, when now-sophomore Travis Tibbits and now-senior epeeist Adam Campbell-Kruger were able to win third place in the men’s sabre and epee, respectively. Tibbits qualified to represent UCSD in the NCAA championships. This year, the Tritons hoped for more podium positions, as they competed in all epee, foil and sabre competitions. They faced grueling competition, including Olympian foilist and national champion Alex Massialas of Stanford and Air Force All-American senior foilist Alex Chiang.

The men’s foil action also had an extremely competitive lineup, resulting in some of the best action. Massialas ended up taking the gold, while Chiang won the silver. UCSD’s very own freshman foilist David Hadler finished with the bronze. Hadler has had a tremendous season and proved worthy of his No. 13 junior world ranking. He went 12–2 in his bouts, only losing to Massialas and Chiang.

In the men’s sabre, Air Force Academy secured the gold and silver positions with junior sabrist Ryan Redhead and senior sabrist Emiliano Kaptain, and the bronze position was claimed by Stanford’s junior sabrist David Beam. Junior sabrist Drew Dickinson was the top placer for the Tritons, finishing in fifth.

UCSD junior epeeist Nicole Chiang was able to win a podium spot for the women’s epee, as she went 9–3 overall for the day. Stanford took the top two positions with freshman epeeist Rebecca Rose and sophomore epeeist May Peterson, while Chiang placed third.

The selections for who will be competing in the 2015 NCAA Fencing Championships will be announced on Tuesday, March 10 at 1 p.m., with the three Triton hopefuls Callaghan, Hadler and Chiang in the best position to qualify for a trip to the national stage.

The NCAA Championships will be held on March 19 to 22 at Ohio State University’s French Field House in Columbus.