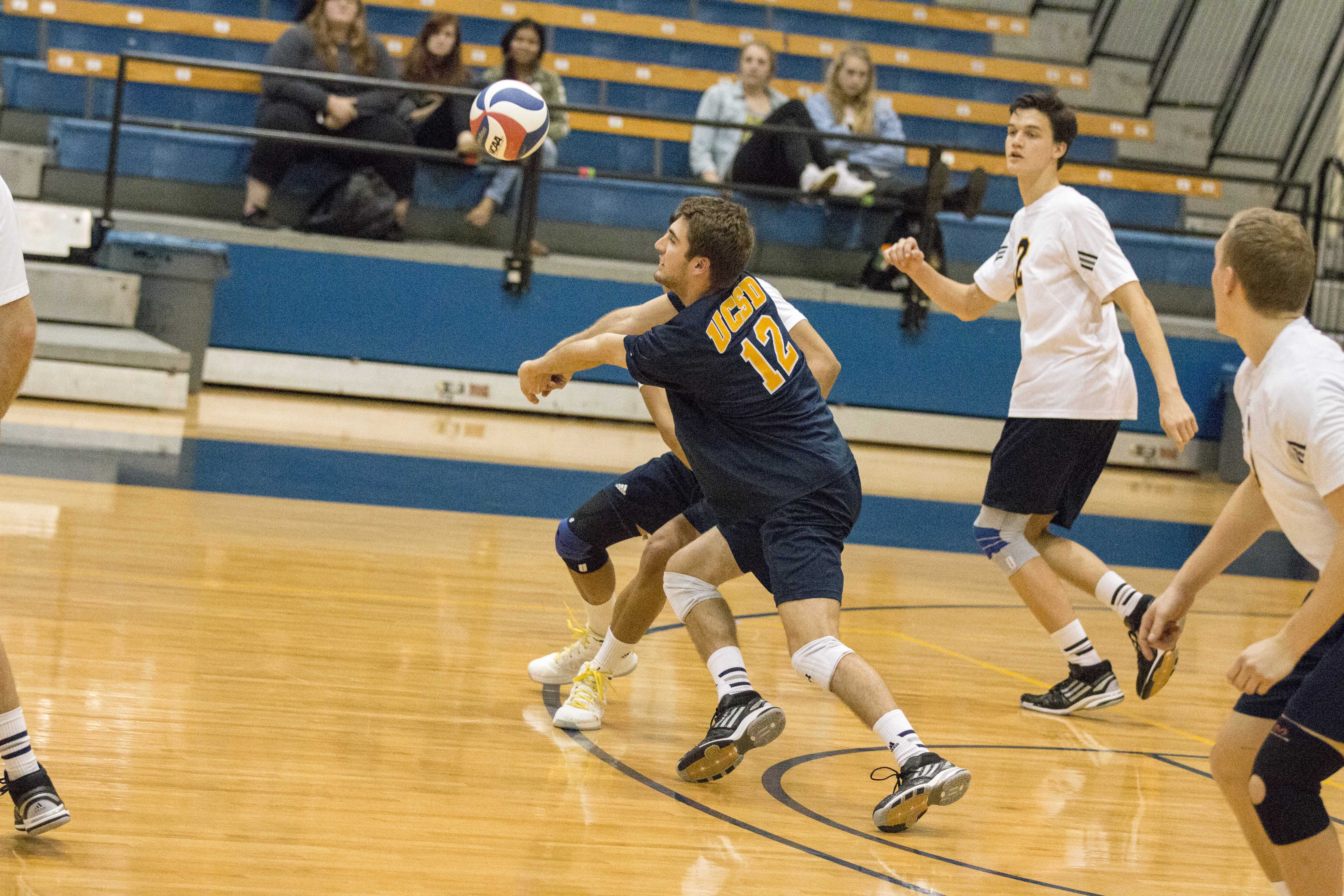 UCSD fails to win a single set in both matchups against No. 7 BYU.

The UCSD men’s volleyball team was unsuccessful in its back-to-back Mountain Pacific Sports Federation games against No. 7 Brigham Young University on Friday and Saturday night at the Smith Fieldhouse. The Tritons fell in three sets on both occasions, losing Friday’s game 25–18, 25–17, 25-18 and Saturday’s game 25–18, 25–20, 25–21.

On Friday evening, it was UCSD that started the stronger of the two sides in the first set as the Tritons quickly took a 6–3 lead, thanks to a streak which featured three kills from freshman outside hitter Luke La Mont. However, the Tritons soon lost their advantage as the Cougars took six points in a row to lead 9–6 and continued to build upon their advantage to take the set 25–18.

In the second set, the Cougars were prompt in building a 5–2 advantage with two kills from their freshman outside hitter Brenden Sander. The Tritons managed to bring themselves back within a point at 5–4 with kills from La Mont and sophomore middle blocker Shayne Beamer.

A flurry of points for the Cougars, however, left UCSD with a significant deficit once again at 12–8. The closest the Tritons came again was within two points, with a La Mont service ace and a kill from freshman opposite Tanner Syftestad, making the scores 13–11. After that, BYU continued to widen the gap and eventually took the set 25–17.

The final set saw UCSD take its only block of the game from La Mont to take a 2–0 lead early on. The teams seemed to be evenly matched with several exchanges of points and a service ace from Syftestad bringing them to 6–6. However, the Cougars began to pull away for the third time to a 16–12 lead. The Tritons showed resilience to pull the score back to 16–15 with a Syftestad ace and La Mont kill, but their efforts were to no avail, as BYU took nine of the last 12 points to take the set 25–18 and a match victory.

Despite the loss, positives for the UCSD came in the form of a season-high hitting percentage of 0.240 as well as a career-high of 12 kills for La Mont and 24 assists for freshman setter Milosh Stojcic.

Saturday’s rematch started poorly for the Tritons as they fell behind 5–1 at the start of the first set. UCSD struggled to find a foothold but seemed on the verge of a comeback when a brace of four points featuring a Syftestad kill and block brought it back to within two points at 15–13. The persistence of the Cougars ultimately prevailed, though, and the home squad took the first set 25–18.

The second set proved to be a tight affair at the beginning of the set with the teams staying tied twice before BYU managed to push away to an 11–6 lead. It seemed that the Cougars would take an easy set when they got to set point at 24–16. Yet the Tritons spoiled four set points in a row and produced back-to-back blocks, bringing the score to 24–20 before the Cougars could take the set.

The last set saw UCSD take the upper hand for the majority of the play time. The Tritons marched into a lead, building a four-point advantage at 16–12 after a service ace and kill from junior outside hitter Kirill Rudenko. But at 19–15, a six-point flurry for BYU gave the Cougars a sudden 21–19 lead and enabled them to win the match 25–21.

Once again, La Mont’s performance proved to be a positive for the Tritons as he, for the second game in a row, led the match in kills.

Despite the disappointment, UCSD head coach Kevin Ring took the ability of his team’s service as a bright spot.

“Maybe the best thing we did here all weekend was we served really well,” Ring said. “This is a tough place to serve. You’re serving at altitude. We were able to keep our service errors to a minimum while still serving tough. We’re going to need that the remainder of the season.”