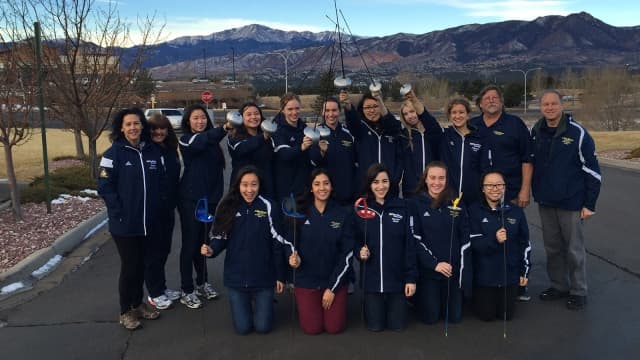 “It was just a great team performance, and they particularly brought up the level when they were fencing against people within the conference,” UCSD assistant coach Josh Runyan told the UCSD Guardian. “Stanford’s the team that always gives us problems every year, and usually we’re finishing behind them, also with Air Force … so [we] are really doing well.”

“Our best performer for the weekend was a veteran: Megan Gesner,” Runyan said. “She’s very talented. She fenced very solid against everyone and was really the rock behind the women’s team.”

The Triton women also competed in out-of-conference matches, winning 18–9 against Brandeis University but losing 20–7 to Duke University and 19–8 to Northwestern University.

On the men’s side, the Tritons had strong performances all around, despite traveling to the tournament without one of their best foilists, sophomore Mitchell Shulman, due to injury.

“On the men’s side, this year, we probably have the best foil team we’ve ever put together,” Runyan said. “They’re really talented.”

Freshman foilist David Hadler finished with a strong 11–3 record on the day, showing superior play in spite of his age.

“He had an excellent performance against all the teams there and fenced really well,” Runyan said. “He’s a freshman, but he has a lot of experience. In his final year in high school and at the beginning of orientation weekend, he was fencing at World Cups, so he’s gone off against some of the top fencers in the world.”

Senior sabrist Peter Meckling and junior epeeist Art Arutjunancs also had an incredible tournament, each finishing with an 11–4 record.

While the well-rounded performances of the weekend show strong promise for the rest of UCSD’s season, the Tritons still have a tough road ahead.

“It adds a lot of confidence, but I do need to say that the challenge is even bigger coming up in a week and a half when we go to Northwestern,” Runyan said. “There, we’ll see the teams that generally finish at the top of the NCAA nationals.”

Both men’s and women’s teams will compete at the San Diego Open on Sunday, Jan. 25, located at Cathedral Catholic High School before competing in the Northwestern Duals the following week on Jan. 31.