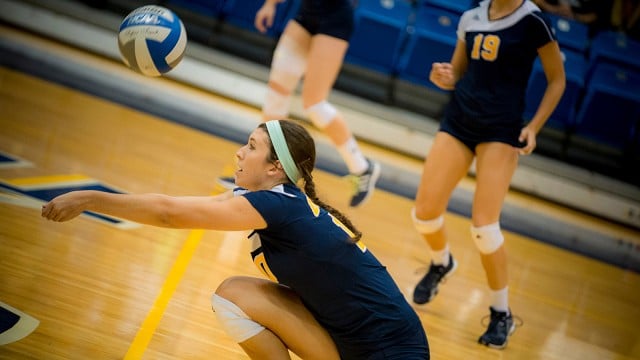 The UCSD women’s volleyball team faced off against Cal State San Bernardino and was taken down in four sets this past Friday. However, the Tritons were able to win against Humboldt State on Saturday, staying undefeated against them in a matter of four sets. Both matches took place at RIMAC Arena.

Against San Bernardino, the Tritons were down in both sets two and four, with the Coyotes leading the entire final frame. The 25–19 loss marked the fifth consecutive loss for the Tritons, which led to a drop in overall rankings to 12–11 and 10–9 in California Collegiate Athletic Association rankings. The Coyotes, after their fifth consecutive win, improved to a record of 18–5 overall and 15–4 in CCAA rankings.

“We’re having trouble making the plays and we’re just making it hard on ourselves that way,” UCSD head coach Ricci Luyties told the UCSD Athletics Department. “The best thing for us to do now is to have a short-term memory and just focus on getting it done rather than thinking about the last play. I have to stay positive; it’s tough, but I think they can pull themselves out of this [losing streak].”

Junior outside hitter Danielle Dahle, senior opposite Caitlin Brenton and freshman outside hitter Amanda Colla led the Tritons in kills, hitting 12, 10 and 10, respectively. Dahle and Colla also managed to gain double-doubles as they had hit 15 and 12 digs, respectively. Junior setter Heidi Sierks finished the match with a team-high 35 assists and 13 digs.

On Saturday, UCSD hosted Humboldt State (16–7 overall and 13–6 CCAA ranking) once again at RIMAC for the Tritons’ senior night. It was the final career home appearance for seniors Caitlin Brenton, setter Alyssa Lin and outside hitter and opposite Rachel Gam.

The match was decided in four sets, with scores of 20–25, 25–18, 30–28 and 25–20. The Lumberjacks led the entire first set and stole a win. The Tritons retaliated with a consistent lead and a win in the second set. By the tense third set, the Tritons were down a close 27–28. They powered through and ultimately grabbed the win with three consecutive points, scored back-to-back by Dahle and junior middle blocker Kameron Cooper, followed with a final double block from freshman middle blocker Alyssa McNeely and Gam. The Triton’s 3–1 victory over the Lumberjacks snapped their losing streak and pushed them to a 13–11 overall and 11–9 CCAA ranking.

“It was such an exciting and fired up game. I was excited to contribute tonight and to go out on such a high note. It meant everything to me,” Gam told the UCSD Athletics Department. “Our communication was key: We were talking and we had so much fire that we wanted to win and so it really got the ball rolling. I just want to finish strong in these next two games to end it.”

This win keeps UCSD undefeated against Humboldt and marks the 100th career win for head coach Luyties, who has been coaching at UCSD for four years and holds a 100–43 record as coach here.