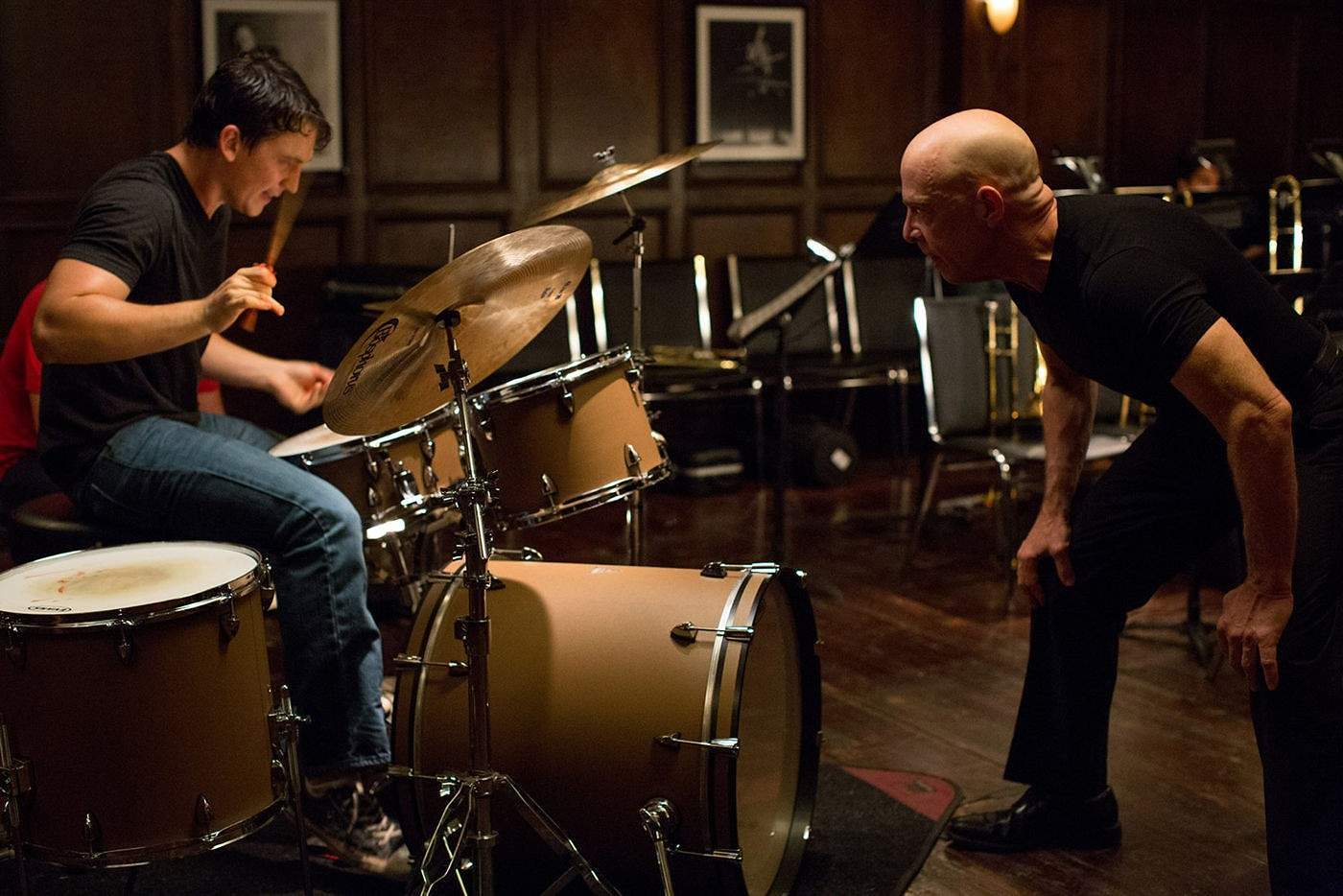 Director Damien Chazelle whips up an adrenaline-inducing portrayal of a volatile jazz ensemble instructor who tortures students as part of a program to cultivate greatness.

Imagine a young Beethoven playing “Moonlight Sonata,” each chord transporting him through time and space; he’s so enraptured, fingers battered and bleeding, yet he continues to practice. Now imagine Beethoven’s music instructor leaning over him like a thundercloud, lacking the decency to wait until the piece is finished before reminding him, “You’re going to want to clean that blood off my keyboard.”

Now replace Beethoven with music student Andrew Neyman (the Miles Teller we all know and love from “The Spectacular Now”), trade in that keyboard for a drum set, and you’ve got yourself a film that accurately portrays “greatness” as it is whipped into shape. Director Damien Chazelle’s film “Whiplash,” which originally premiered as a short film in the 2013 Sundance Film Festival, tells the story of Terence Fletcher (J.K. Simmons — yes, he played the kooky father in “Juno”), a monstrous college jazz ensemble instructor, and Neyman, the one student who finds the courage to stand up for himself only to realize his goals don’t fall far from those of the brutish instructor himself.

A freshman at a well-established music conservatory, Neyman quickly learns he must snag a spot in Fletcher’s jazz ensemble if he ever wants to “make it” as a musician. But this is no simple task. Fletcher, an ex-legend-turned-professor, is something akin to the spawn of your average, overbearing father and a Tyrannosaurus rex. As the film progresses, he paints a black-and-white world in which one can either be average or great. If he was here now, he’d get really close to your face and warn, “Make that choice early on,” spitting between each word, “before you become average by default.” Chazelle outlines Neyman’s struggle: taking the time to incorporate both his broken family life and dysfunctional relationship with movie theater clerk, Nicole (Melissa Benoist).

Ordinarily, a subject as common as burnt-out-musician-becomes-teacher-and-takes-anger-out-on-students runs the risk of being cliche. But Chazelle sidesteps, skips — does just about everything short of calling a cab — to drive him far away from cliche. He has an uncanny ability to take a tired theme, add a teaspoon of dark comedy, along with a cup of extremity and end up with a unique rendition of a mundane concept. The most prominent example of this is when Neyman can’t match the tempo Fletcher has in mind — he spends hours teetering between two slow and too fast — until Fletcher smiles, retreats calmly to his desk and chucks a chair at Neyman’s head. It’s in these absurdities where the film finds its mojo.

In terms of casting, Simmons was born to play Fletcher. In an interview with Entertainment Weekly, Chazelle calls Simmons his “muse.” Who else could go from, “Don’t worry just relax and have fun out there,” to an indignant, “I will fuck you like a pig” all within a matter of seconds? Despite all the pain he inflicts, a short scene depicting Fletcher playing piano in a clandestine jazz club with eyes closed and a smile on his face, somehow renders him harmless. It takes a special kind of actor to simultaneously impress and disgust an audience.

While the Crowd Pleaser Award goes to Simmons, to ignore the multifaceted Teller — who, by the way, plays every single one of Neyman’s drum solos himself — would be a crime punishable by court of law. This duo is like ice cream and pie, best consumed together. The most satisfying scenes are without a doubt the ones in which Neyman challenges Fletcher’s authority — bull against bullfighter. The audience relishes in the tension as they find out who will survive this clash of egos.

Of course, when this tension is paired with music by Justin Hurwitz — who composed original work and interspersed classic jazz standards by greats such as Duke Ellington — it culminates in some of the most cathartic scenes in theaters this season.

On the whole — drum roll please — “Whiplash” raises the question, how far would you go to become a genius in your field? Hint: Neyman goes pretty damn far. This, ladies and gentlemen, is an all-or-nothing kind of film. If you can’t stand the heat, get out of the theater, as chances are, you’ll be sitting alongside Neyman in that stone-cold conservatory, pulling your hair out each time Fletcher so much as glances in your direction.