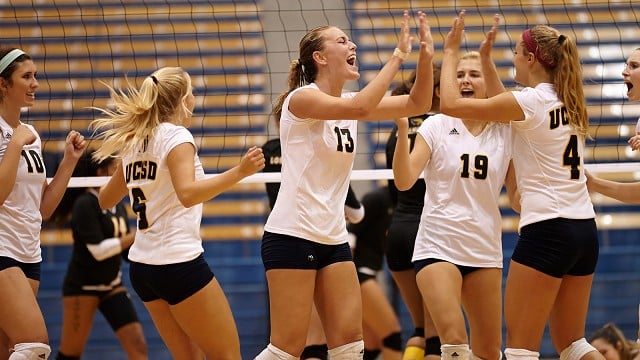 This past weekend, the UCSD women’s volleyball team had mixed results on the road with a loss against Chico State on Friday and a three-set win against Cal State Stanislaus on Saturday. UCSD is now 11–6 overall and 9–4 in California Collegiate Athletic Association matches.

tal team blocks against Chico State and another nine at California State Universities. Despite success at the net in Chico, the Wildcats produced 61 kills to the Tritons’ 51 and slipped by with 97 digs compared to 90 by UCSD. Both teams hit under .150, a compounding problem for the Tritons and the failure

to produce kills allowed CSUC to gain the advantage.

“We blocked well but couldn’t get the offense going,” UCSD head coach Ricci Luties told the UCSD Athletics Department. ”We needed some kills that didn’t happen.”

Chico bested the Tritons in both of the first two sets, but UCSD battled back to draw the five total matches. Despite a 17–14 lead in the fifth and final set, the Wildcats surged their way past the Tritons for a 24–22 victory.

“Chico played us really tough,” Luyties said. “We have to play well against every team in this conference in order to get a win.”

Collectively, UCSD hit .211 as a team and held a 10-dig advantage over the Warriors with 43 kills on 123 attempts. Defensively, the Tritons limited the Warriors to .111 attack percentage.

UCSD wavered little throughout the night, never trailing in the first and third sets. The match against the Warriors marked the third time in four matches that UCSD has swept an opponent in three sets.

“We blocked well again tonight,” Luyties told the UCSD Athletics Department. “The difference from our last match was that we kept our unforced errors down. It was a solid CCAA win on the road.”

With the split weekend, UCSD is now tied for third place in the CCAA. The Tritons continue road play next weekend with matches at Cal State Dominguez Hills on Friday, Oct. 24 and Cal State Los Angeles on Saturday, Oct. 25. Both are scheduled to start at 7 p.m.