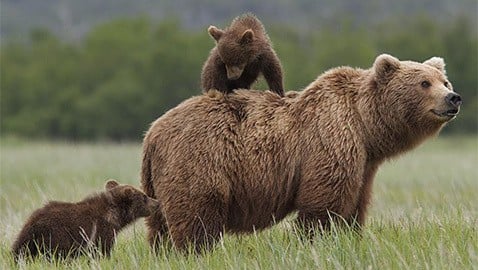 Exciting wildlife footage and a short and sweet story make this nature documentary an especially enjoyable addition to the Disneynature series.

The trade-offs of the Disneynature series are generally consistent: Images of natural spectacle and documentary insightfulness are toned down in exchange for cuteness and a story designed for youngsters. But “Bears,” the latest addition, was able to make the best of this quid pro quo. We are treated with a story that has a surprising degree of drama and great wildlife footage of bears in action. “Bears” is directed by Alastair Fothergill and Keith Scholey, both of whom are exclusively nature documentary filmmakers, and narrated by comedian John C. Reilly. Fothergill was one of the directors of “Planet Earth,” the award-winning nature documentary that beautifully depicted the grace of nature. Understanding how to film nature and wildlife, Fothergill is able to capture a sense of awe. Similarly, the combination of editing and narration made for a story that is fairly captivating.

Shot for a year on the Alaskan coastline, “Bears” tells the story of two bear cubs, Scout and Amber, and their mother Sky, for the first year of the cubs’ lives. They are followed every step of the way on their trek through the mountains and valleys of Alaska, and they become characters that we are invested in. Rarely has there been better providers of “awww” moments than these adorable bears. The film succeeds when it allows the bears to be themselves. You can’t help but smile when the mother bear picks up one of her cubs by the coat and flings him into the air or when one of the cubs accidently gets his claw stuck in a clam. It is very warm and fuzzy, and it is enhanced by Reilly’s lighthearted, although sometimes cheesy, narration.

The narrative revolves around the bears’ pursuit of food, which turns out to be quite a difficult task. Along their journey, the bears are antagonized by a sly, thieving fox, a cannibalistic outcast bear and an angry alpha male bear. Stephen Colbert famously calls bears “godless killing machines,” and, outside of the playful, adorable Sky and her cubs, we can see why. One scene in particular creates a real sense of uneasiness when the outcast bear, Chinook, attempts to make a meal out of the bear cubs. The one-year period is filled with both comfort and trepidation, as the mother bear learns both the hardships and joys of motherhood. It is a familiar tale of family togetherness, which resonates with a human audience. The anthropomorphism may feel forced, and some of the scenes may have been artificially strung together for the sake of plot or drama, but the central conflict of survival is genuine.

The faraway lands of coastal Alaska become open to us as we take the trip from mountain summit to the rivers where the salmon run. There are documentaries with more alluring footage and information than “Bears,” but Disneynature’s simple and friendly approach is effective. Though the film rarely strays from the cute and cuddly, when it does, the tension is compelling. The camera work is clean and vivid, and the wildlife footage is satisfying. The intent is to inspire both awe and “awww,” and that intent was fulfilled.