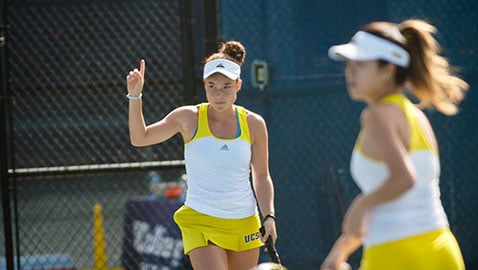 The Tritons win against Claremont, fall to UC Davis

The UCSD women’s tennis team kicked off its 2014 season on Saturday, Feb. 1 with a strong 6–3 victory at home against Division-III Claremont-Mudd-Scripps, followed by an 8–1 home loss to Division-I UC Davis on Sunday.

In their first contest of the year, the Tritons performed well in singles play, taking four of the six total matches. In the No. 1 singles slot, sophomore standout Kyra Scott handily defeated Katie Kuosman (6–2, 6–0). Scott expressed confidence in her abilities but was quick to acknowledge room for improvement.

“I’m very consistent,” Scott said. “I’m working on trying to get a little bit more power on my serve and some other shots. I missed a couple volleys in doubles, but I’ll clean that up.”

In singles play, three other Triton victories came via freshman Nava Nowamooz in the No. 4 slot over Yvonne Likomanova (6­–4, 6–2).

In the doubles component, UCSD took two of its three contests as the team of Scott and sophomore Paula Chou defeated Caroline Ward and Kuosman (8–6) in the No. 1 slot, while senior Tara Vanooteghem and junior Laura Wilke downed Likomanova and Sheena Patel (8­–3) in the No. 3 slot.

“I think the doubles teams this year are going to be much stronger than last year,” Scott said. “Everyone’s working really well together.”

On Sunday, the Tritons struggled to keep up with UC Davis.

The Aggies dominated, sweeping all six singles matches against UCSD, while only surrendering one loss out of three total doubles contests.

“It was just a good test to see what we need to work on,” UCSD head coach Liz LaPlante said. “Playing better competition gets us ready for our important, Division-II competition.”

In spite of the tough, overall loss, the doubles team of Scott and Chou provided optimism for the Tritons, as the pair came back from a 6­–2 deficit and rallied against Nicole Koehly and Layla Sanders to record a 9–8 victory in the No. 1 slot.

LaPlante noted that this year’s team is far younger than past rosters and that the team is hoping to gain experience in its early matchups.

“We have a lot of strong freshmen that are starting,” LaPlante said. “We have a lot of really tough matches coming up, so I’m hoping they will continue to get their confidence up and play up to their potential.”

After its opening weekend, UCSD’s young squad now look ahead to a full slate of matches with few breaks in between.