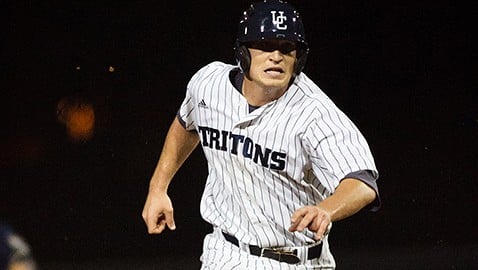 The team scored 13 runs in its last exhibition match

In a game that seemed over after the first pitch, the UCSD baseball team cruised to an easy 13–0 victory over the Vanguard University Lions last Tuesday, Jan. 28 at Triton Ballpark.

Behind the right arms of sophomore starter Justin Donatella and sophomore reliever Troy Cruz, who allowed a combined five hits and no walks, the Tritons recorded their third straight shutout. As a staff, the Triton pitchers are yet to surrender a run on the preseason. Donatella struck out eight batters, while Cruz added another five.
“Justin [Donatella] did a great job,” UCSD head coach Eric Newman told the UCSD Athletics Department. “All night long, he was really pounding the strike zone. He was down in the zone and throwing two to three pitches for a strike when he needed to.”

Offensively, the Tritons were disciplined all night against a wild Vanguard pitching-staff, consistently drawing base-runners against a staff that went deep into the bullpen. UCSD drew eight walks and recorded 12 hits against nine pitchers, who also hit five batters for the contest.

In addition to his performance on the mound, Cruz was also an offensive catalyst for the Tritons. Going 2-for-5 on the night, he scored twice, had one RBI and stole a base, batting in the lead-off spot for UCSD.

With the preseason now over, the Tritons prepare for their first series of the year against Holy Names University on Feb. 2 at Triton Ballpark. The first pitch of the doubleheader is set for 11 a.m.