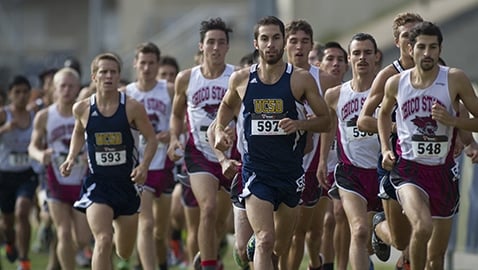 The NCAA West Regionals held last week in Spokane, Wash. marked the end of the road for all but one member of the UCSD cross country team. Sophomore Tareq Alwafai’s 14th place finish is good enough to not only earn him All-West Region honors but he is also the first Triton to qualify for the NCAA national meet since 2008.

Alwafai, along with junior Tanner Collins and sophomores Marie Diaz and Paige Hughes, earned All-West Region Honors. Over 300 athletes competed in the NCAA Regionals, which drew schools from as far as Alaska Anchorage and Brigham Young University–Hawaii, as well as conference rivals Cal State Los Angeles.

“We are really pleased to have four All-West Region athletes,” UCSD head coach Nate Garcia said. “Maria and Paige did very well and we are very happy with how Collins ran. The full squad stepped up; both sides improved by over 100 points over last year.”

For the men, Chico State continued to dominate under the trio of Isaac Chavez, Johnny Sanchez and Alfonso Cisneros who had blown away the competition at the CCAA Championship last month. Chavez won the meet with a time of 30:55.9 with Sanchez about 30 seconds behind, posting a time of 31.32.2. Cisneros finished sixth with a time of 31:52.9. All three contributed to the low Chico score of 33.

Alwafai led the Tritons with a time of 32:26.2 — a new course record for UCSD. Three seconds behind him, Tanner Collins also qualified for All-West Region honors with a time of 32:29.8. Collins, though close to making it to nationals, missed out on the spot by less than two seconds.

The UCSD men finished sixth out of 18 teams with a score of 168, 18 points behind Cal Baptist and 18 points from a ticket to the NCAA Nationals. As expected, Chico State won handily, scoring almost 50 points lower than second place Alaska Anchorage University.

Diaz and Hughes finished within two seconds of each other. Diaz finished 22nd with a time 22:49.6 and Hughes came in with a time of 22:51.0. Hughes and Diaz, although putting up impressive times, did not qualify for the national championship.

Susan Tanui, a senior from Alaska Anchorage, won the women’s race, finishing with a time of 21:45.4. Tanui was followed by teammate Joyce Kipchumba who put up a time of 21:48.4. Chico State’s Ayla Granados, who won this season’s CCAA title, finished fifth with a time of 22:07.3.

“Tareq proved to be an individual who can step up,” Garcia said. “But he is headed toward a different experience in nationals without the team around him.”

Alwafai will continue to train for the NCAA National Championship, which will be held on Nov. 23 back in Spokane, Wash.