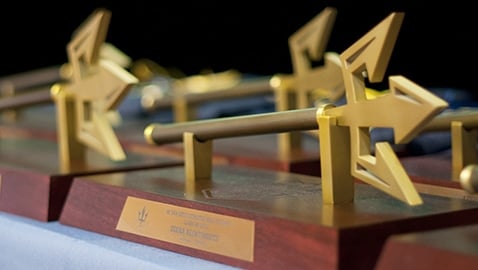 The UCSD Athletics Program inducted its first inaugural class into the UCSD Hall of Fame in a ceremony in Price Center East Ballroom Sunday, Oct. 20.

A panel of UCSD athletics administrators, former UCSD student-athletes and coaches picked the eight-member class beginning in June. The first class of inductees was announced near the end of August.

“Today is a special day in the history and development of UC San Diego athletics,” UCSD Athletic Director Earl Edwards said. “We are here to celebrate another milestone in the growth of our athletics program.”

Former UCSD women’s and men’s volleyball coach, serving between 1979 and 1995, Doug Dannevik also earned the Hall of Fame distinction, along with former Athletic Director Judy Sweet. Sweet served as the Athletics Director for 24 years before Edwards took over and later became the first female president of the NCAA.

“Having a Hall of Fame is long overdue. It’s massive for the school, and it’s going to bring great credibility to the school when people see the kind of athletes and personnel that we have,” UCSD women’s soccer coach Brian McManus said.

Banners honoring each inductee will be hung in RIMAC Arena. Hall of Fame members were also given plaques — The Triton Award — to commemorate the achievement.

“I think having the banners up in RIMAC Arena are going to be a great touch for our student-athletes. To kind of see the names and accomplishments of some of the people that came before them is a great step for us,” UCSD cross country coach Nate Garcia said.

Any UCSD student-athlete is eligible for consideration 10 years after they’ve completed NCAA competition, and any former coach or administrator can be nominated three years after working at UCSD.

Served as Directors of Athletes at UCSD for 24 years.

Two-time All-American and NCAA DIII national player of the year in 1996.

Member of 1987 and 1989 NCAA D-III national championship teams and four-time All American.

Two-time national coach of the year, tutored 31 All Americans and is winningest volleyball coach in UCSD history.