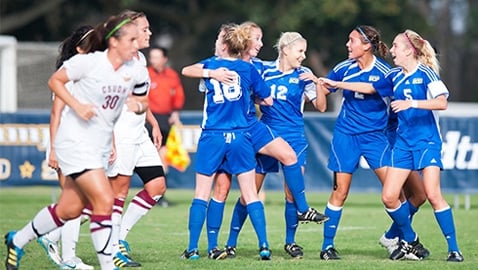 Six games into the new season, missing three players that punctuated the Triton attack, UCSD is back at its old role of the over-performing underdog.

Last season, UCSD finished just short of a CCAA playoff berth, and in a 2013 coaches’ poll the Tritons were picked to finish fifth in the conference.

So far, the squad, which boasts nine newcomers, looks competitive in a conference that is consistently considered one of the most difficult in the nation. Having played five of its six games on the road, the Tritons are 4-1-1 overall and 2-1-1 in CCAA play.

“We feel good about where we’re sitting so far,” UCSD Head Coach Jon Pascale said. “We know that the road ahead is still very challenging, but we feel good about we’ve accomplished so far. And we’ve got a lot of guys returning, and have added a few good players who should really help us in the games to come.”

UCSD returns the core of a defense which ranked first nationally in goals against (0.44) and shutouts (0.71). Senior All-American goalkeeper Josh Cohen returns in the net for the Tritons anchoriback-four which includes seniors Gavin Lamming and All-American Alec Arsht.

But in the attacking third, Pascale has been experimenting. In his sixth season, Pascale has paired senior forwards Tsuk Haroush and Cory Wolfrom along with newcomers freshman Malek Bashti and junior Alessandro Canale. Canale — who has missed two of UCSD’s games to represent the United States at the Beach Soccer World Cup — is UCSD’s top goal-scorer, with two goals in three games.

Pascale said the management’s focus on set pieces has paid off for the Tritons. UCSD has scored five of its eight goals off set piece opportunities this season, a good omen for a team who has had difficulty scoring in the past.

With its core returning and a couple new additions that give UCSD an edge in the attack, Pascale expects the Tritons to be “right there in the mix.”

The Tritons return to the pitch this Friday, Sept. 27 to face Humboldt State at home.