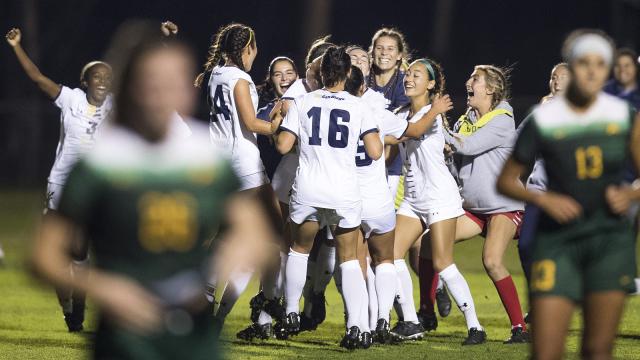 For the fifth-straight season, the UC San Diego women’s soccer team took home a California Collegiate Athletics Association title on Sunday Nov. 17, defeating No. 10 Sonoma State University — the only team to have beaten UCSD this season —in a 1–0 shutout.

To get a chance to compete in the finals, the team competed in a nail-biting defensive standoff. The No. 2 UC San Diego’s women’s soccer team snatched a 1–0 CCAA semifinal victory over the No. 22 California State Polytechnic University Pomona Broncos on Friday with an overtime goal from sophomore midfielder Christina Oddone in the 109th minute.

The extra minutes from Friday’s match posed a challenge.

“Defensively, that was one of our best games of our season, and we’re going to need to have that again against a tough opponent in Sonoma,” Jones said. “A lot of our players played a lot of minutes, so there’s going to be fresh faces that step up on Sunday and do the same job.”

The semifinal win was impressive considering how smoothly things were going for the Broncos of late. UCSD had already defeated Cal Poly Pomona once in the season, in a 1–0 home win on Oct. 4. However, the Broncos hadn’t lost a match since, including a 3–1 win over California State University, Los Angeles this past Tuesday to secure their place in this semifinal. The Tritons, meanwhile, were coming off 13 days of rest since a 2–1 overtime win over the same CSULA squad.

Throughout the match, UCSD generated far more chances than the Broncos, but couldn’t find the back of the net. In the 35th minute, sophomore defender and midfielder Ashlynn Kolarik crossed the ball into the box to freshman defender Erika Braun, but the pass was behind Braun and all she could manage was a weak volley off her extended left foot. But UCSD immediately regained possession, and Kolarik sent another cross into the box that sophomore midfielder Emily Killeen sent into the left post, inches from the net.

The second half again featured many unconverted UCSD chances. In the 70th minute, Kolarik delivered a cross to the far post where Braun rocketed a left-footed shot towards the bottom-right corner, but sophomore goalkeeper Sydney Williams of Cal Poly Pomona made a diving save. The end of regulation saw a series of corner kicks, including one with four seconds remaining from freshman midfielder Mika Celeste; Celeste found the head of redshirt senior defender Kelsey Kimball, but the attempt missed wide right.

The first 10-minute period of extra time was mostly uneventful, as both teams sought to prevent an opposing goal to end their tournament. Nine minutes into the second overtime, the Tritons finally broke through. Junior defender and midfielder Delaney Whittet passed the ball to Killeen at the corner of the penalty area, where she was tackled by a Cal Poly Pomona defender. But no whistle was blown, and Killeen stood back up before crossing the ball to junior midfielder Michelle Baddour, who redirected it to Braun. Braun tapped the ball to Oddone, who stepped right and unleashed a shot that deflected off a defender, past Williams, and into the bottom-right corner.

“It happened really fast,” Oddone said after the game. “Emily [Killeen] worked hard to get the cross off, and Michelle [Baddour] and I just made the correct runs, and I was lucky enough to get on the end of it.”

The home crowd of 434 erupted, and the Triton bench streamed onto the field in celebration as their spot in the finals was assured.
Despite the close result, the Tritons were much better on the offensive end, with 17 shots to the Broncos’ 7, and 6 corner kicks to the Broncos’ zero. After the match, UCSD’s head coach Kristin Jones said, “It was an incredible game, which we knew was going to happen … It was a fast-paced game, and it was dynamic. I thought we controlled most of the tempo.”