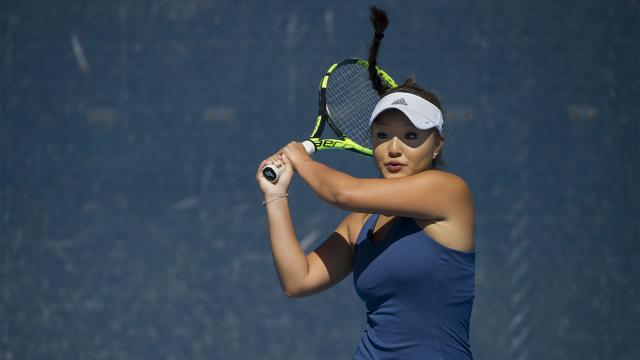 On Thursday, the 16th-ranked UC San Diego women’s tennis team hosted 28th-ranked Point Loma, extending its win streak to three as the Tritons took a convincing 8–1 victory over the Broncos.

In the second matchup of the season between the teams, the Tritons had their way once again. When both sides met on Feb 28, UCSD achieved a 6–3 away win over Point Loma.

With the win, UCSD improves to 11–9 overall and heading in the right direction after hitting a rough patch last month where the team dropped five matches of a possible six.

UCSD took care of business in singles play as all six Tritons went home with a win.

No. 1 for the Tritons, junior Ashley Chao, defeated No. 53 Nikki Newell in straight sets, 7–5 and 6–2. The win now brings the win total of the season to 12 for the 21st nationally ranked Chao.

At No. 2, sophomore 55th ranked Becky Chou had herself a day as she upset No. 17 Carolina Cuevas in straight sets, 6–4 and 6–4. Chou has now extended her win streak to four in singles play.

In doubles, UCSD took two of three as it very nearly swept the entire competition on the day.

At the top doubles spot, Chao and sophomore Becky Chou wasted no time in their doubles match as they won 8–2. Meanwhile, junior Madison Hale and Weil added to the victories on the day with a score of 8–6.

Next up for the Tritons, they will head to Concordia Irvine, in their only matchup of the season on Monday, April 9.