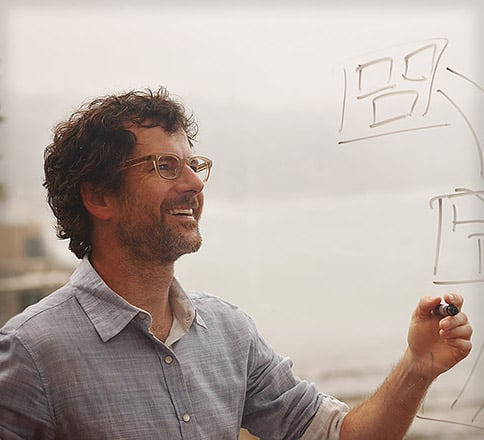 Highly respected as a research university, UC San Diego has not had any trouble bringing pioneers in various fields of research into the fold. One such professor in the cognitive science department has quite a storied career. While teaching at Stanford University, he taught students who would go on to invent Instagram — in fact, the idea for the social network was conceived in his very class.

Dr. Scott Klemmer, professor of cognitive science and computer science and engineering, loves to boast about this fact in COGS 120, Interaction Design, in which students get to design their own social media website from the ground up. In addition to teaching these aspiring web and app designers, Klemmer is a co-director at the Design Lab, where he tries to imbue UCSD students with the skills that they need to succeed in the budding field of Human-Computer Interaction.

Though he became a highly regarded figure in his field, Klemmer began his career in cognitive science nearly by accident.

Upon graduating in 1999 with a degree in Art Semiotics from the Brown and Rhode Island School of Design in Providence, Rhode Island, Klemmer came out west to the Bay Area to work for Interval Research Lab, a Palo Alto laboratory and technology incubator focusing on consumer product applications and services with a focus on the Internet. He soon fell in love with his work.

Dr. Klemmer received his doctorate in computer science from UC Berkeley in 2004 and went into a teaching and research position at Stanford, where he would stay for nine years. During this time, the field of computer science underwent a shift in focus, largely due to researchers like himself.

“The view of computer scientists [at the time] was that the stupid users needed to figure out how the technology worked,” Klemmer explained. “One of the things that happened with the web, social media and then mobile phones is that technology became so pervasive that it was just clear that if you were going to win, you had to design for people.”

This new field, HCI, rose to prominence alongside Web 2.0 in the mid-2000s, when website and app designers began to think of how to create interfaces that would create the best possible experience for their users. Klemmer was in the perfect position to latch onto the trend and find his own niche within computer science.

When Dr. Klemmer came to UCSD in 2013, his work in HCI added to a strong tradition of Human-Centered Design research that began in 1986. That year Dr. Don Norman, who had studied both engineering and psychology, founded the first cognitive science department in the world at UCSD, leading to the creation of a whole new field of computer science.

“What’s really neat is that the ancestral home of the viewpoint that we need to design technology for people in a lot of ways is right here at UCSD,” Klemmer remarked. “In fact, the very first book on this topic was called ‘User Centered System Design,’ because the acronym for it was UCSD.”

Also in Features:
Becca Miller’s Fight Against Structural Sexism || Harrison Lee
How to Save a Life: One Day with the Border Angels || Oliver Kelton
Saying Goodbye to OASIS Director Patrick Velasquez || Madeline Park

The two authors of the book, Norman and Jim Hollan, lead the Design Lab alongside Klemmer. Created by Chancellor Khosla in 2014, the Design Lab at UCSD aims to solidify UCSD as a trailblazer in the developing field of user-centered design. According to their website, their philosophy is composed of a “novel mix of practice and theory, of Thinking, Observing and Making: TOM.”

“The vision that the chancellor had for the Design Lab, really, the person who made the design lab happen was the chancellor. He saw the potential for UCSD to do something interesting in this area, and he challenged Hollan, Norman and I to think about what we might be able to do, and what we talked to [Khosla] about is that we see a huge opportunity with the academic world for its ‘complex socio-technological systems.’”

At the Design Lab, researchers tackle issues such as the effects and distribution of fake news across social media. Though Klemmer and several other cognitive science researchers focus on HCI, he clarifies that the Design Lab covers many other fields of design, all bound together by a guiding philosophy.

“The way that we think about the Design Lab here is really simple: Design is a way of approaching things in the world, and you can really be a designer in everything in your life. So design does­­­­n’t show up just when you get to put together an interface, or something else. Everything in your life you can ­­­­approach like a designer, which really means asking, ‘What is the real problem? How can we brainstorm ways of addressing that and then make prototypes to learn whether our hunch is on the right track?’”

As the field of HCI has risen to prominence in the past decade, Klemmer himself has reached fame in the design community, speaking at numerous international and domestic conferences.

“Two weeks ago I gave the keynote talk at the HCI conference in Korea, and that was amazing because there were 1,500 people at that conference,” Klemmer boasted. “It has to be one of the single largest country HCI conferences in the world. It’s just cool to see how much interest there is in HCI design right now.”

With so much fame coming his way, it’s easy to imagine such a professor becoming arrogant. Humbly, however, Klemmer insists that he mostly owes his success to good timing.
“I was really passionate about art and saw how technology was changing the field of computer science and I happened to stumble into the field, exactly at the moment that it blew up.”

2 thoughts on “Professor Scott Klemmer: At the Head of a Growing Field”