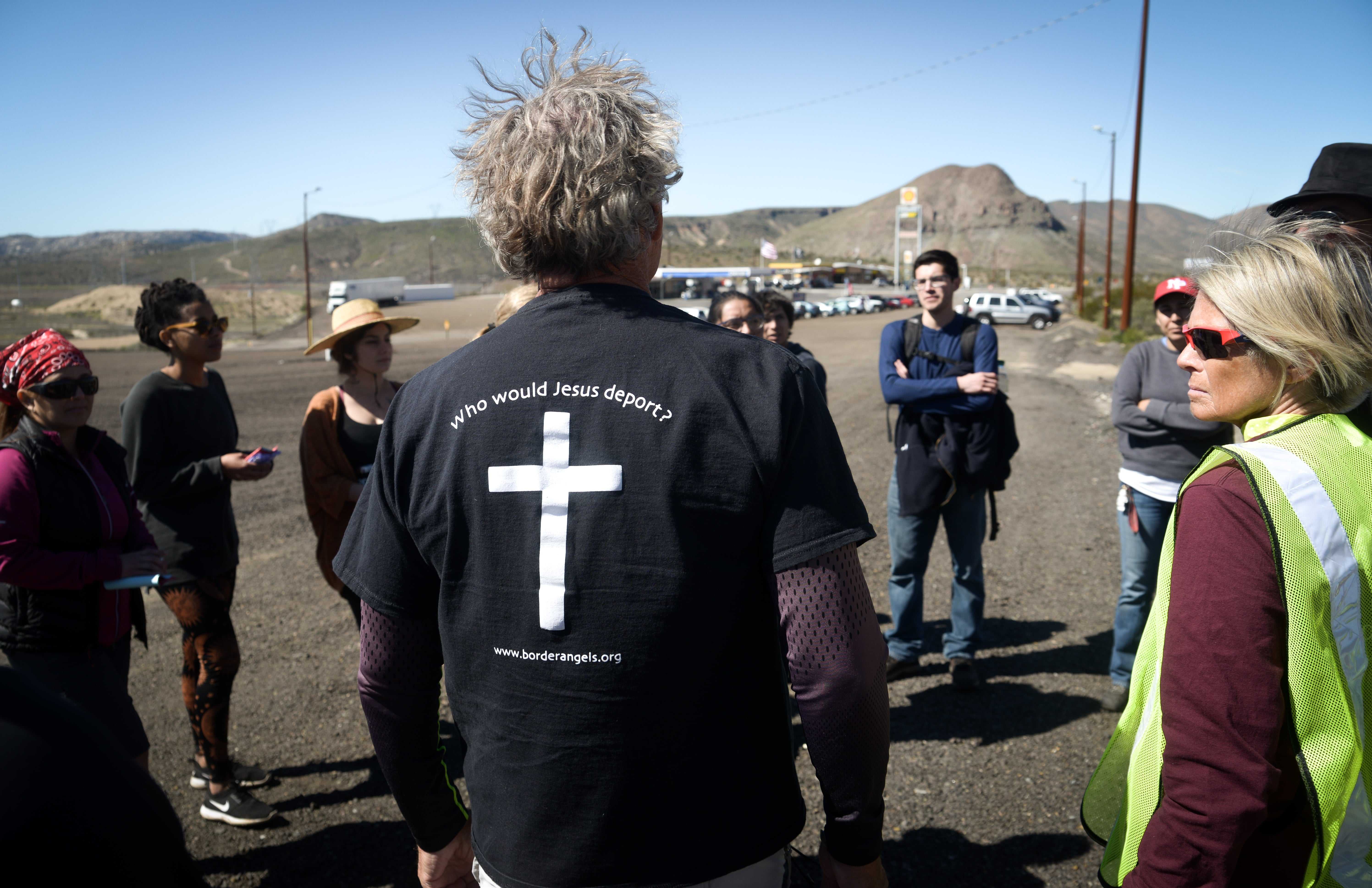 We started our journey in the desert near Jacumba outside a gas station seemingly frequented only by the occasional trucker. The late February sun hung in the middle of the sky, illuminating the barren, rocky landscape we would be traversing for the rest of the day. As volunteers with Border Angels, we had dedicated our Saturday to making undocumented migrants safer in their mission to reach the United States.

Breaking the tranquility of this desert landscape, we parked our cars in a dusty parking lot and filed out to gather around one figure. With the countenance of a man wise beyond his years, Eleanor Roosevelt College senior Jonathan Yost spoke to the multitude of assembled volunteers, imparting on them the significance of the work they were about to undertake.

“Those desperate to reunite with families, flee poverty and escape violence are left with one option, and that is to cross unlawfully,” Yost explained. “Many who do cross through the deadly desert face many risks. Our mission as Border Angels [is] to drop gallon jugs of water, food and warm clothing along hard to reach places on the U.S.-Mexico border, giving migrants a better chance of surviving their trip.”

Yost enumerated the many dangers migrants face when crossing the border unlawfully. Entrusting their lives to smugglers called “coyotes” who promise to guide them through the desert, the migrants put themselves at risk of robbery, rape and murder, since the coyotes often have little regard for their clients’ well-being. This danger is compounded by the many anti-immigrant militia groups and rogue border patrol agents who prowl the desert. Perhaps the greatest threat out here, however, is fatal exposure — the migrants usually lack water and clothing to deal with the heat and cold of the desert. This is where Border Angels hope to lend a helping hand.“Today, you will become first responders,” Yost intoned. “You will be paramedics out there, although you will not interact with your patients. What you bring today — that is their life-saving treatment. Just like a life-saving blanket administered in the back of an ambulance, what you bring today will prevent their condition from killing them.”

Newly endowed with a sense of purpose, we split into several groups. My group headed further up the road to the foot of a craggy rock outcrop. Disembarking, we made our way into the barren wilderness skirting the border, armed with jugs of water, cans of beans and bags of clothes to leave in the desert.

A few minutes into our hike we came across an ominous sign — a scarecrow made of abandoned clothing. Scarecrows like this, created by anti-immigrant militias as a grim warning to migrants, are an all-too-common sight along the border. Many volunteers can speak to the intensity of the anti-immigrant sentiment they have witnessed here.

“The first time I came and scouted this route, I was here with my friend Anthony,” longtime volunteer and ERC senior Jake Lory explained to the UCSD Guardian. “We walked all the way down there. There were some border patrol agents in the area and immediately a border agent sprinted around this corner, gun drawn, and was pointing it before he even saw us at all. Luckily nothing happened, but that just speaks to the intensity of what’s happening out here.”

Continuing along the trail, we came across a peculiar sight – a backpack and a pile of old clothes and water bottles strewn across the trail. At Yost’s request, we paused to reflect on its meaning. As Yost explained, migrants need extra layers of clothes to survive the brutally cold nights in the middle of the desert, but often need to leave supplies behind to save weight. Yost hoped that the migrants had reached their destination safely, sharing the fate of one immigrant who was not so fortunate.

Alfonso Martinez Sanchez was a construction worker and butcher who had called Vista, California home for more than 20 years after crossing the border from Mexico. Married with five children, he had put down roots and come to call America his home. His life would be upheaved, however, on a day in early 2012. While working at a local liquor store, a police officer asked to see his ID. When he could only produce a Mexican ID, the officer turned him over to the Immigration and Naturalization Services, which deported him to Mexico. Dedicated to reuniting with his family, he made every attempt possible to cross the border again. After being caught by border patrol on three attempts, he tried a fourth time  on April 20, 2012.

Unfortunately, Martinez Sanchez was ill-prepared for the journey, a multi-day trek through the arid desert near the Arizona border. In the desert temperatures in the day can soar above 80 degrees but drop below freezing at night. After a day of traversing the desert in those conditions, he began to feel sick – likely the onset of heat stroke. The “coyote” leading him and 20 other migrants across the border refused to stop, and Martinez Sanchez soon found himself alone on the trail. At the risk of being deported, one member of the group alerted Border Patrol when he arrived in the United States, hoping they could rescue his fellow migrant. Their search ended tragically five days later, when officials found Martinez Sanchez’s barely recognizable corpse along the desert trail.

Leaving behind a grieving family in the United States, Martinez Sanchez became one of the estimated 11,000 migrants who have perished crossing the U.S.-Mexico border since the beginning of Operation Gatekeeper.

Launched by the Clinton administration in September 1994, Operation Gatekeeper aims to halt the flow of undocumented migrants across the border near San Diego. The operation, which has cost several billion dollars, has doubled the the number of border patrol agents and led to the installation of miles of fencing and underground sensors near the border. The operation has succeeded in making border-crossing much more difficult: With easy routes across the border blocked by Border Patrol, migrants have been forced to use more difficult paths in remote, hard to traverse parts of the desert.

“It can take days, and this is the type of terrain,” Yost said, pointing to the rugged mountains surrounding us. “In the flat areas, the nice open areas, they’re going to get caught. So they go through the terrain like this, and a lot of things can happen out here. And they just can’t carry enough with them.”

The use of these more dangerous routes has led to a surge in migrant deaths since the 1990s, making the Border Angels’ mission increasingly urgent.

Tragic incidents like Martinez Sanchez’ death motivate Yost and his fellow Border Angels to continue their work. Yost eagerly shares these stories with volunteers, hoping they will learn to empathize with the migrants as well.

Other members of our group had more personal reasons for empathizing with the migrants. For some members of Chicanos Latinos for Community Medicine (CCM), one of the UC San Diego student groups accompanying us on our journey, the plight of immigrants from Mexico was all too familiar.

“I actually had a family friend who crossed last summer and it was in this area of Ocotillo,” Muir College junior and CCM member Michelle Martinez told the Guardian. “It was really tough. I think he lost his way so he was walking around in the desert for a couple of days and at some point he ran out of water. He couldn’t handle it anymore, so he went on the highway and a car saw him, thankfully, and they helped him get to a motel.”

Stories like hers gave meaning to the difficult trek through the rugged terrain.

After hiking for a little over an hour, our group finally reached a secluded valley in the middle of the mountains. Littered all around us were water jugs left by previous volunteers — nearly all were had been drank from, a welcoming sign that our work would not be in vain. As we came to the end of our mission, Yost invited us to reflect on the value of the work in which we were partaking.

“It just so happens that when we put out the water it becomes like a pillar of light, because with the sun shining on it it lights it up,” Professor Edmond Chang, who has volunteered with Border Angels for many years, observed. “So when the migrants come here, there’s the water, but also just the symbolism of the water conveys hope and a sense of welcome — that there are people on this side [of the border] who actually care and would welcome them.”

We dispersed across the area, dropping our jugs of water and other supplies in hopes that we would help future migrants live another day. As the afternoon sun sank lower in the sky, we made the difficult trek back to our cars, each one of us coming away with a newfound empathy for the struggle of the thousands of migrants who endure the perilous journey in hopes of finding a better life.

To Yost, the plight of the migrants is something everyone living in the San Diego area has a duty to be aware of. As a student at UCSD, he feels that it is his duty to help prevent what he calls a humanitarian crisis in his own backyard.

“You live near the border, you live in San Diego, you go to UCSD,” Yost proclaimed. “You have a responsibility to know about the deaths that are going on, about the humanitarian crisis going on not halfway across the world but in your own backyard. And if you know about it, you have to take action.”

We are currently hiring writers for Spring 2017. Apply here

2 thoughts on “How to Save a Life: One Day with the Border Angels”