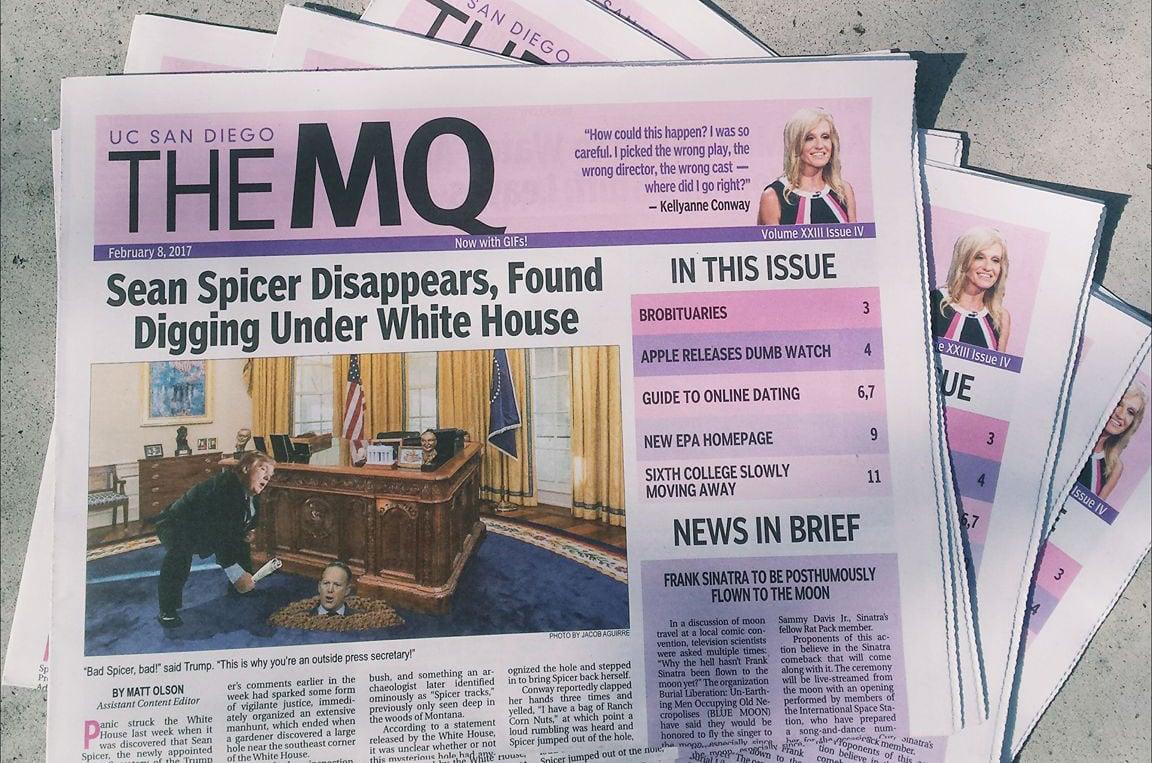 In light of the chaotic state of politics and recent hysteria generated through misinformation and alternative facts, the Gutter feels compelled to join the war on fake news. Not only has fake news managed to put a literal man-meme into the White House, it has fooled thousands of Americans into turning their backs against pizza, that precious jewel at the heart of the American experience. Worse, it has come to our attention that fake news is currently being published on this very campus.

An investigation initiated by the Gutter has revealed that the Muir Quarterly deals in fake news. Sources have confirmed that issues of The MQ are strewn with “news stories” heavily packed with distortions and falsehoods, and we have looked into this issue on your, the reader’s, behalf.

The MQ, a student-run publication founded in 1988, is distributed in neat stacks across campus, like landmines waiting to release their IQ-depreciating payload on the minds of innocent knowledge-seekers. Hapless readers are greeted with sensational headlines and linguistic sleight-of-hand meant to distort one’s perception of the UC San Diego experience in service of some unknown call to deceive.

Take, for example, The MQ’s latest falsehood, which claims that White House Press Secretary Sean Spicer was purportedly found digging a complex tunnel system under the West Wing. The Gutter’s rigorous fact-checking system has entirely debunked these claims, and sources have confirmed that Spicer is unfortunately in sound mental condition and will be for the foreseeable and regrettable future. The MQ has fabricated a piece of “journalism” with the only facts being the names of the current administration. This is irresponsible journalism at its finest.

Or, consider the fact that The MQ reported that the pharmaceutical company Mylan allegedly raised the price of the Epi-Pen to one human soul. This is an outrageous claim. Our team supports that the cost of an Epi-Pen is much closer to a supple hunk of flesh. Any casualties of The MQ’s dishonest reporting can be reassured knowing that your peanut allergy will not cost you your ticket to paradise. What’s an arm and a leg (and a few bites from the spleen) when compared to peace of mind?

It is disappointing that — this far into the era of fake news — nobody has blown the whistle on this publication until now. The Gutter will not allow this transgression to stand any longer. Rest assured, our team is committed to fact checking every issue of The MQ in order to ensure the truth, and only the truth, finds its way into the sweaty palms of its readers. The truth is not overrated, and no, Steve Jobs’ spirit is not roaming the mortal plane. Jobs is in the ground, bloated and belly-up, much like the state of truth in this uncertain, new world.