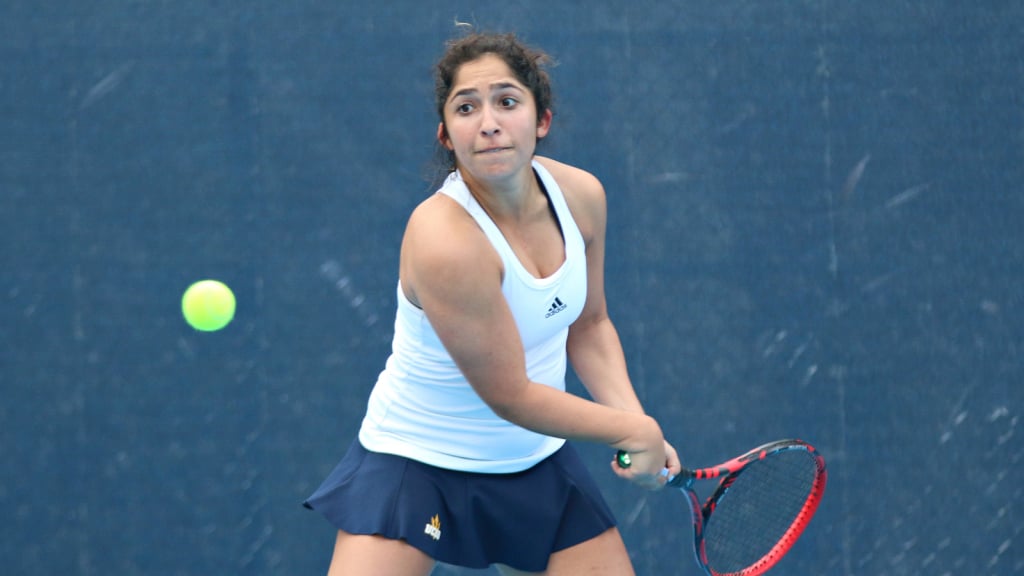 The No. 13 UC San Diego women’s tennis team had a busy week seven, playing three matches in seven days, winning all three. Though the Tritons lost a few exhibition games last month, they have been unstoppable since the regular season started. On Sunday Feb. 19, they beat No. 50 Cal State Stanislaus 8–1, then went on to win 5–4 against Eastern Michigan University on Tuesday Feb. 21. Finally, they traveled north to Los Angeles this past weekend and defeated No. 29 Cal State Los Angeles 6–3. With these three wins, the Tritons remain undefeated with a 7–0 overall record.

The Tritons swept the competition in all of the singles matches. Each match only required two sets, except for the match between junior Jasmine Hosseini and junior Stanislaus’s Ebone Qualls, which required a tie-breaking third set. Hosseini, however, fought hard to defeat Qualls in the final set 13–11. Sophomore Alexandra Weil and freshman Valeria Corral did not let their opponents score at all, both earning the victory in two sets (6–0, 6–0).

The doubles competition was the only one in which the Tritons had a loss. Junior Britta Mosser and senior Shannon Theisen were defeated 8–1. Mosser, however, won her singles competition. The Madison Hale and Weil duo blanked Stanislaus 8–0, meaning that Weil did not let her opponent score at all that day.

With a 6–3 win over Cal State Los Angeles, the Tritons once again saw victories from Mosser, Hosseini, Weil and Corral in the singles matches. In true fashion, the Hale and Weil duo beat Cal State Los Angeles in the doubles competition. Sophomore Ashley Chao and freshman Becky Chou improved upon their two losses against Stanislaus and Eastern Michigan to defeat their opponent in the doubles competition, 8–3.

Next up, the Tritons will host No. 31 Concordia University this Tuesday, Feb. 28 at 2 p.m.