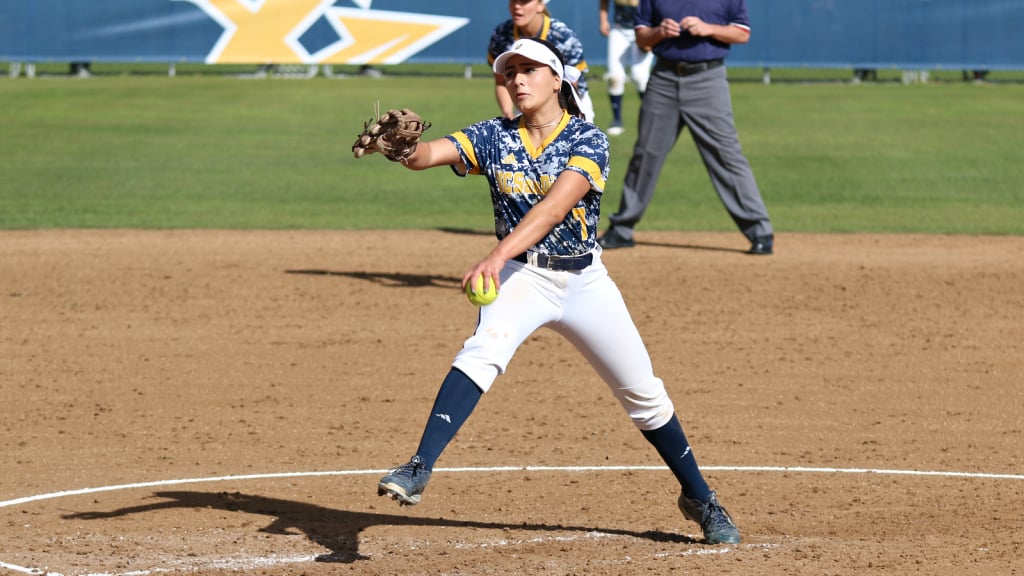 Heading into the weekend’s action, the UC San Diego softball team was a perfect 4–0 to start the season, so the Tritons would’ve loved nothing more than to trounce the Cal State San Marcos Cougars for another untarnished weekend. That was exactly what happened, as they went 4–0 for a perfect 8–0 overall record and 4–0 in the California Collegiate Athletic Association.

To start the game, sophomore right-handed pitcher Lauren Brown immediately took control of the Cougar hitters. Striking out the first batter and forcing the next two out, the Cougars found it next to impossible to get on base Friday afternoon. And in the bottom of the first, the Tritons found themselves in the exact opposite situation–junior outfielder Kelsi Maday dashed to first off a bunt, then moved to second because of a Cougar error and eventually wound up stealing third base. But Ashley Chestnut put the cherry on top–with two outs on the board, the junior first baseman fearlessly slammed one home to put the Tritons up 2–0.

With the score unchanged at the start of the fourth inning, the Cougars were finally able to get something going. Off of two hits and a stolen base, UCSD found itself looking at an uncomfortable 2–1 ball game. But Brown held her ground on the pitcher’s mound, as she only allowed one more hit for the rest of the game, as the Tritons blew by the Cougars in the bottom of the fifth inning, scoring three more runs, leading to a 5–1 UCSD victory.

The second game of the afternoon had an eerily similar start–freshman right-handed pitcher Lizzy Beutter struck out two in the top of the first inning, and when the opportunity presented itself, the Tritons immediately went up 2–0 by the end of the inning. But as CSUSM had apparently learned a little, as they immediately bounced back in the next inning to tie up the game 2–2.

Both teams earned a single run in the third inning, but afterwards it was all UCSD. Scoring a run in both the fourth and fifth innings, the Tritons set themselves up for their magnum opus–a three run sixth inning dashed out any hopes of a Cougar comeback. When the dust settled, the Tritons were on top 8–3, the only feeling the team has known so far this season.

After an extended rest due to a weather delay, the Tritons once again gave the Cougars all they had to start the game. After Brown held the Cougars to a scoreless start yet again, sophomore outfielder Caitlyn Weisner slammed one out of the park with two runners on base to put the Tritons up 4–0 at the bottom of the first inning. The Cougars wouldn’t even get close–while CSUMB put up two runs, a monster five run inning once again wiped out any chance of a Cougar comeback. The Tritons came away with their largest margin of victory of the weekend with a 9–2 blowout.

The fourth and final game of the weekend series was the only one that made the Tritons a little nervous. Despite going up 4–0 in yet another fantastic first inning, the Cougars shut out the Tritons for the rest of the match. It was up to the Cougars offense to take the lead, and they came close, as they scored three runs for the rest of the match, resulting in a 4–3 UCSD victory.

The fifth inning was critical to the Triton victory. After Cal State San Marcos scored its third and final run of the match, there were Cougars on third and second base–a perfect opportunity to take the lead. But freshman right-handed pitcher Lizzy Beutter, who had just stepped in partway through the inning, forced the CSUMB out, and the Cougars never had a better opportunity to score, leaving UCSD with their eighth straight victory start the season.

Next up, UC San Diego faces off against Azusa Pacific on Saturday, Feb. 18 at 12 p.m.