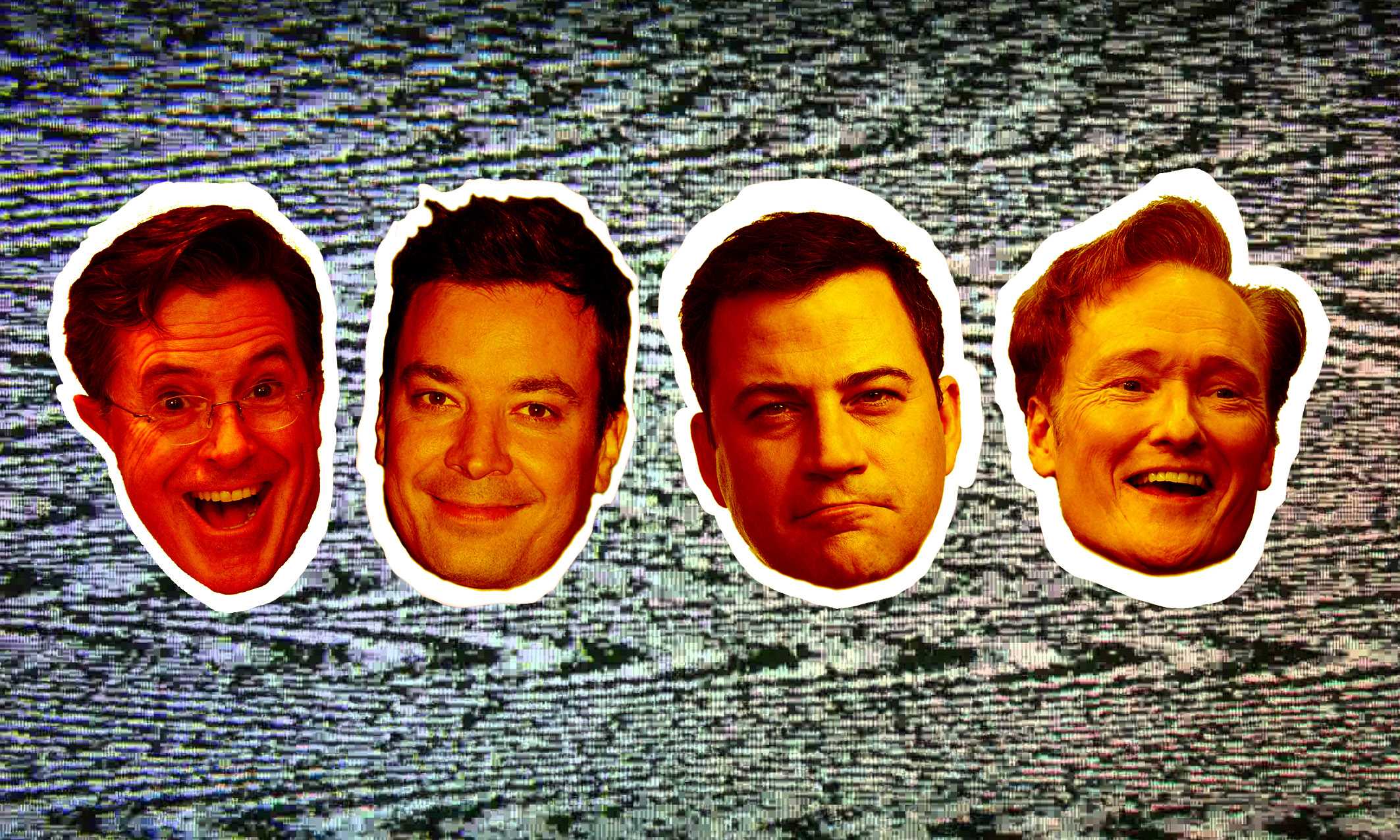 Late-night television talk shows, like all entertainment, exist to enervate us to the pain of consciousness and distract us from that most human sense of loneliness and isolation, created by the curse of imprisonment inside the mind. More modernly, they also exist to lampoon the contemptible popular culture from which they have arisen, and of which they are, it is key to remember, very much apart. The trouble with cultural criticism, of sophisticated, lowbrow and college newspaper varieties, is that it likes to posture as if it were a livid witness to the culture it criticizes, when it is always an active, direct agent of it. Hypocrisy aside, there is something essential and lovely about the existence of these numbing agents for lonely human souls. The demand for sardonicism and irony is also legitimate. They are poses which have been adopted by artists as a response to stupidity and evil every place that artists have been extant. But demand means something different now.

It would be absurd to object to entertainment, it would be criminal to object to satire. We need sweetness and acidity in our diet to cut through all the grease, but what if all anybody ever drank was orange juice? Satire is supposed to be a foil to earnest expression, not replace it. We see, too late, that the consequences are hideous and depressing. Besides its viral proliferation and popularity, this brand of satire also bears the mark of its mass production. YouTube means that traditionally acerbic late-night television can be seen at any time of the day, and is no longer created for a certain type of learned American grown-up who isn’t asleep or else spending the night out and about, now late-night is for everyone. And ever more so, with the substitution of Don Rickles and Johnny Carson with milder Jay Leno and Jon Stewart who have now been substituted with downright childish Jimmy Fallon and Stephen Colbert. Originally the exclusion of child viewers afforded late-night TV a license to be bawdy and, yes, offensive. The fangs have been removed, the wit has been domesticated and the enterprise is soaring skyward. Now the segments are prepared in single-serving portions, to be viewed alone and consecutively. People watch so many of them precisely because of how insubstantial they are, they say almost nothing and so they must be consumed in great volume for the audience to receive any kind of fulfillment or satisfaction. Huddled around our respective screens, all watching the same jester dance about, we are united only by our aloneness and disenchantment.

The election of Trump has made it clear to the children of the media that something else does exist beyond the sparkling firmament. Media now infects and feeds upon every last quiet corner of human life, but all of that matters much less than we thought it did. As much time as we spend in a corporate mental fantasy land, and as much as we lament the banalization of direct experience, the actual universe has yet to be eliminated and still possesses great power. The real world of rocks, trees and fascists emits an ugly moan beneath the cellophane, celluloid surface, underneath which we had thought nothing lied except more gloss. Some people have ideas which do not accord with the media — enough of them exist to win an election.

All of the old uncertainties have been replaced by a single question: how could this have been possible? People say Donald Trump was elected in spite of the vilifying performed by people like Stephen Colbert, but what if instead Trump was elected because of this vilification? When the forest of photographs negates what we’ve seen using our own skulls, and when groupthink scaffolding corrodes the robust subject-hood humanity earned after the middle ages, there is great surprise when any decision is made privately, in the old sense of the word of course, outside of the blue-lit sphere, by actual people. There are many people excluded from late-night TV, and by all major news networks save for one, which has foundered before our eyes this year, because they are not included in liberals’ larger obsession with televisual representation; as if the solution to propaganda without surcease and the proliferation of oppressive images was the annexation of new groups of people into the index of propaganda and images.

After the devastating election results, Stephen Colbert issued a video statement which boasted 7,278,745 views at the time of writing. In the clip Colbert says that “you cannot laugh and be afraid at the same time.” But what if Americans, and all of humankind, are supposed to be afraid? Should we laugh when Florida is finally swallowed up by the sea, and our ice caps dissolve to nothing? Would all of this have even been possible if it were not for the all the laughing gas offered along the way? And how is rebellion possible when the rebellious attitude is adopted by the most corporate of all entities, to harness the sexy street style of real progressivism for the sake of marketing? Since the welfare of humanity matters less than profit, our evolutionary flaws are exploited. We are made unserious, and much worse, we are made less human. What real rebellion will look like now is unclear, but one thing is obvious — it will not happen on YouTube, Facebook, Twitter or, dear God, Snapchat. The revolution, it has been said, will not be televised.

With all of this complex warping and twisting happening, only one thing stands to really improve. Cultural criticism, not Stephen Colbert’s but other peoples’, has never been poised to become so interesting, has never had the opportunity for more intricacy. The downward spiral of all culture is matched only by the upward spiral of theory, and now, in the greatest artpiece of all time, they intertwine into a gorgeous double helix. Of course, it will be at its most intricate and beautiful when absolutely nobody can see it. But never mind anyway, that’s plenty. That’s enough.

3 thoughts on “A Meditation on Late Night TV’s Descent”