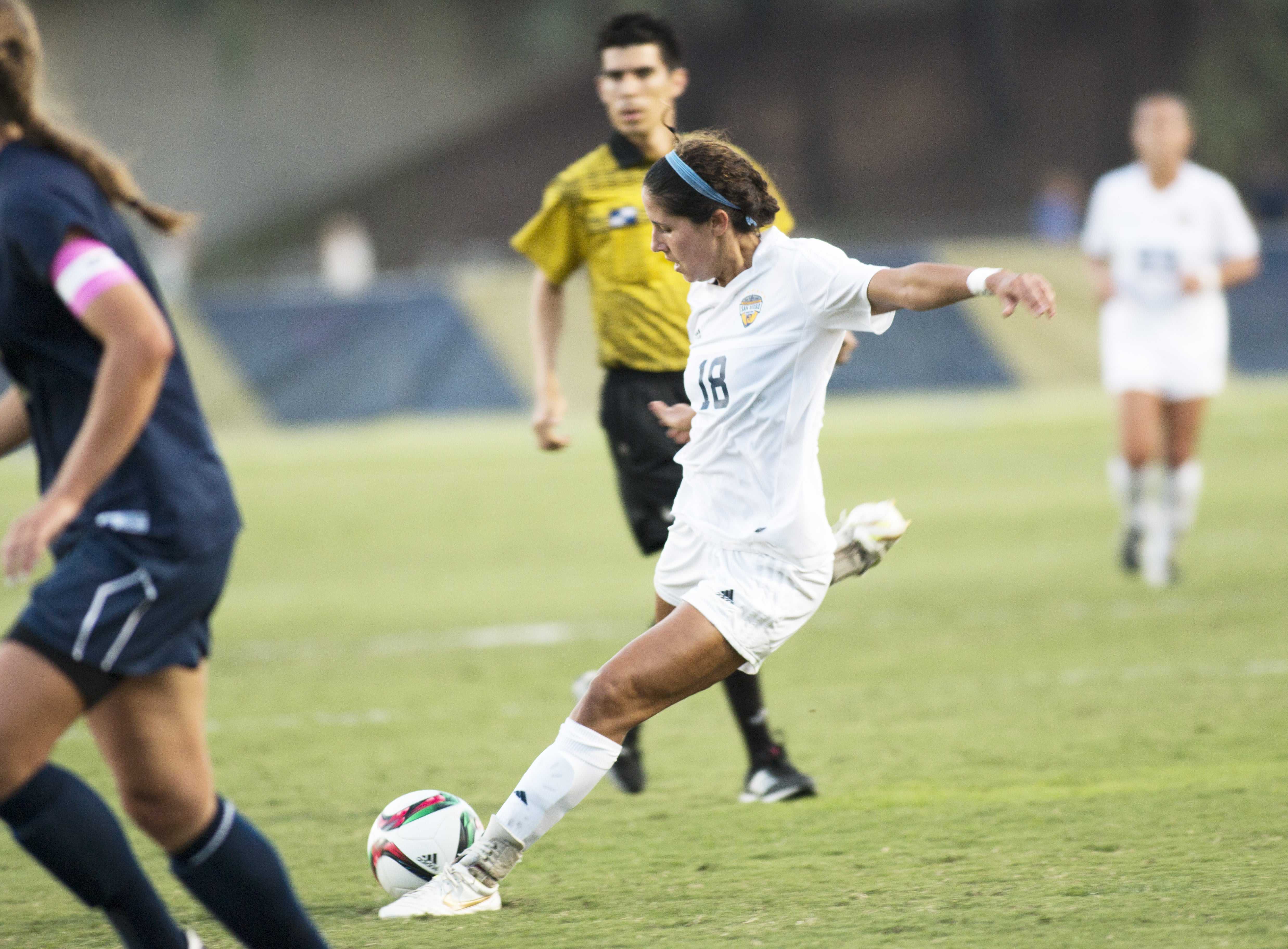 The UCSD women’s soccer team won its ninth CCAA title with a 1–0 win over Cal State Bernardino. They only needed to tie to win the crown but held on for the victory at Premier Field. The only goal of the game was scored by junior defender Aimee Ellis in the 59th minute.

It is UCSD’s first CCAA title since the team won it in 2012.

With the win, the Tritons improve their record to 15–2 overall, earning their 12th-straight victory. UCSD is one win away from having a perfect record in CCAA play. The Coyotes fell to 8–6–1 overall and 7–3–1 in league contests. Third place Cal State San Bernardino had the conference’s second longest win streak at six games and was 7–0–1 in its last eight games.

The Tritons broke the tie in the 58th minute when Ellis scored her first collegiate goal with a strike into the right corner from 15 yards. That goal was all the Tritons needed. UCSD took 10 shots in the first half of the game. The Coyotes’ senior goalkeeper Megan Vina made five saves to keep the score at zero. Vina was the CCAA player of the week thanks to two straight shutouts on the road. Redshirt senior goalkeeper Itzel Gonzalez had one save for the Tritons and earned her ninth clean sheet and league-leading 13th.

The eighth-ranked Tritons scored two goals to overcome a 1–0 deficit to beat Cal Poly Pomona 2–1 Saturday at Kellogg Field. The win means that the Tritons went a perfect 12–0 in conference play. It is the first time a team has gone undefeated in CCAA play since Sonoma State went 14–0 in 1998. This also marks the first time in UCSD history that the Tritons have gone undefeated in CCAA.

At the 16th minute, the Broncos’ senior forward Tori Tappero scored a right-footed shot from the penalty area that was just out of reach from Gonzalez. It was Tappero’s first goal of the season.

The goal ended the Tritons’ long shutout streak of nine games and 851 total minutes, both which were the longest since UCSD entered Division II in 2000. It was only the second goal UCSD gave up against a league opponent and the first time it was behind in a league match.

The Tritons finally tied the game in the 63rd minute. Junior forward Katie O’Laughlin drilled a right-footed shot from the right which was saved by Bronco junior goalkeeper Ricki Ives, but the ball fell to sophomore forward Mary Reilly, who tapped it in from the right for her 10th goal of the season.

In the 75th, the Tritons were able to take the lead when sophomore midfielder Summer Bales dropped a perfect pass from the right and O’Laughlin drilled a shot into the left corner for her 15th goal of the season.

Gonzalez had one save for the Tritons, and Tappero’s goal was the only shot that Cal Poly had in the first half.