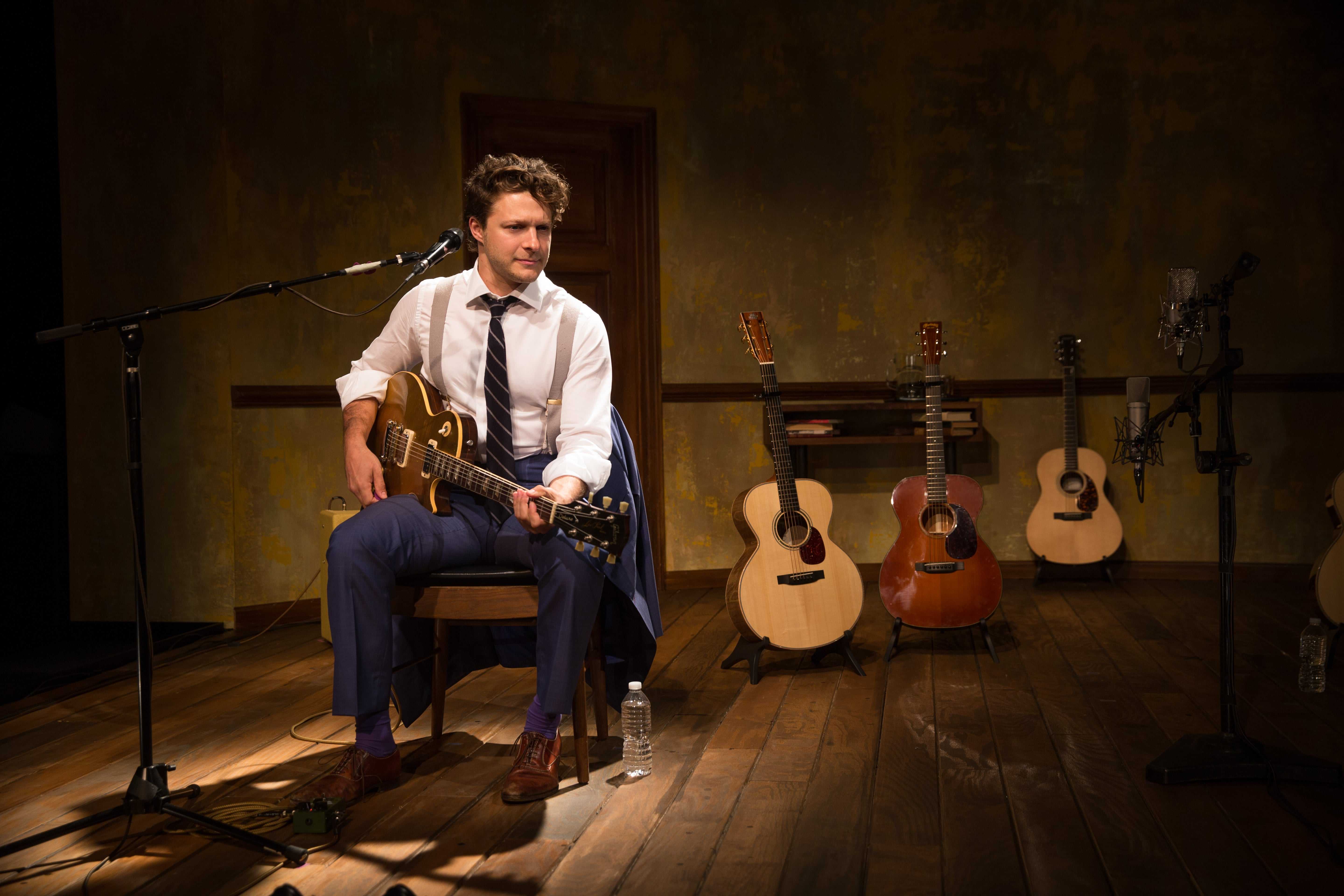 As Benjamin Scheuer walks onto the circular stage, the 33-year-old award-winning songwriter and performer wears a suit and tie and carries a guitar in his hands. By the time “The Lion” is over, he has played each one of the six guitars on stage, sung fifteen songs and left behind his jacket; rolled up his sleeves, unbuttoned his shirt; slipped his suspenders off his shoulders; removed his socks and shoes. Just as he sings that “clothing became armor” during a time when he could not play music, over the course of his performance he strips away everything that protects him from our judgment and empathy, but also everything that holds him back. As “The Lion” hits a climax, Scheuer lets go of the restraint he so carefully cultivated in his earlier songs. He uses the full strength of his voice for the first time and finally demands of himself, in the wake of hardship and self-discovery: “I want to know what makes a lion a lion.”

“The Lion” is Scheuer’s life story, and his choice to tell it through song — with a few narrative monologues and catch-your-breath moments when he tunes a guitar or drinks some water — is only fitting. Music is Scheuer’s greatest passion in life, and the threads of his love for the guitar are woven deep throughout. Director Sean Daniels’ influence and partnership takes the show from a man playing music to a theatrical performance. Scheuer’s songs take us from childhood and his shaky relationship with his father through high-school rebellion, youthful love, hardship and finally to a reawakening of family bonds. He reflects on lifelong changes, his physical and emotional distance from his brothers and mother as well as his relationship with music and himself, but makes no claims that his life is any more remarkable or profound than anybody else’s. It helps that Scheuer’s lyric-writing and guitar-playing skills are top-notch, and his singing is certainly good enough. The strength of “The Lion” is its skillful execution rather than the uniqueness of its subject matter.

Different stages in life are mirrored by the changing of guitars between groups of songs and rotation around the circular stage. Scheuer plays a 1929 Martin O-18 and takes the role of his father for the childhood “Three Little Cubs,” and 120 degrees away, the electric Les Paul Goldtop Deluxe waits for teenage rock ’n’ roll complaints about his father in “Saint Rick.” Despite separation in space and time, the shadow of his father still falls over the entire performance: a reminder to both Scheuer and the audience that some people leave much more complex legacies than any one individual can summarize. By “The Lion’s” conclusion, Scheuer has put forward a fine effort.

The symbol of the lion bookends the performance satisfyingly. Its introduction by Scheuer’s father singing “Three Little Cubs” to his three sons and asking them what they think is the defining quality of a lion — or “what makes a lion a lion” — is gentle and innocent even without knowing the later events of Scheuer’s life. On the other hand, the question’s reprise at the climax, as an end to the narrative, also breaks that narrative by blending a revelation about life with a very convenient moral takeaway. The dual use of the lion motif as both an in-universe realization and an in-your-face moral feels slightly duplicitous, but in the context of Scheuer’s life, it is understandable enough to avoid deeper criticism. I am willing to believe that this conclusion is one that Scheuer legitimately arrived at.

“The Lion’s” story doesn’t try to be unique, and its concluding moral is something we’ve all heard before. Surprisingly, these actually serve to make “The Lion” more compelling, rather than less. The structure of the performance, a one-man musical and narrative characterized by movement and subtle change, is unique enough. It inherently distances us from the events on stage. To combine it with an inaccessible narrative would disconnect the audience from the performance Scheuer and Daniels have created together: a surreal but devastatingly relatable coming-of-age story.