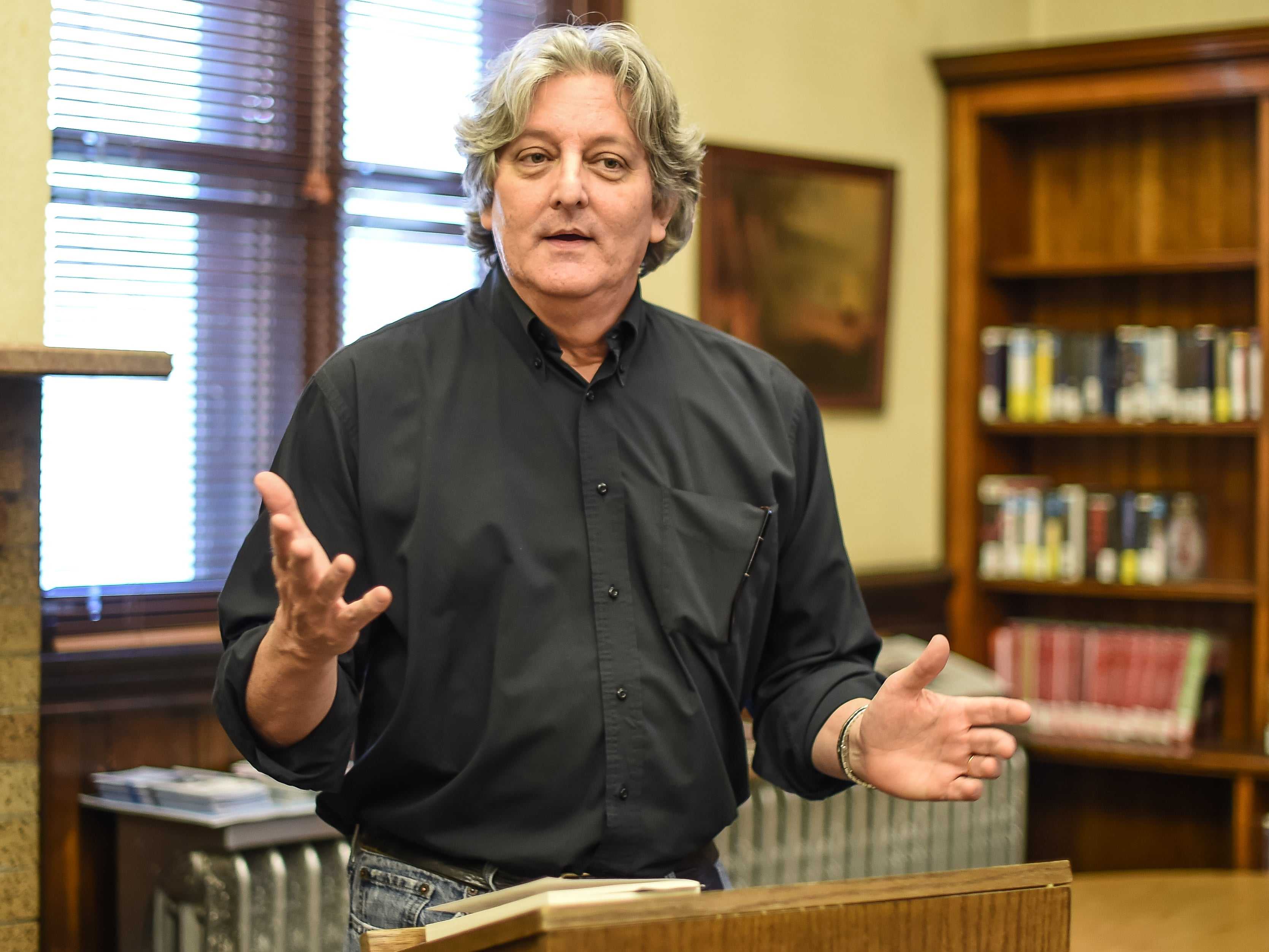 James Ziskin wasn’t always an award-nominated suspense novelist whose Ellie Stone series has been optioned for a TV show — he spent a large portion of his life studying language: First he was a linguist, then he studied Romance languages like French, Spanish and Italian. Then he was a photojournalist, and after that he worked in the Hollywood post-production industry for 15 years. Now, he’s just released the fourth book in his series, “Heart of Stone,” which focuses on the mystery of how two men, unknown to each other, were found dead close together at the bottom of a cliff. Here, James reveals how his past helped shape Ellie, his protagonist, and what he thinks about the crime-fiction genre.

A: In “Styx and Stone” — the first one in the series — it affected it and influenced it quite a bit, because all of the subject matter came from the literature that I had studied. You won’t find that in subsequent books. But you do see a lot of memories of her childhood and of her family and of music — especially the music that she was kind of trained to love as a child and continues to love. So you do see a lot of that. But the more intellectual and academic angles disappear pretty much after the first book, other than maybe the music. In “Heart of Stone,” the latest one, there [are] a lot of references to different types of intellectualism, like art and music and even economics and politics. She is in with a group of old friends that are very interested in these things. And certainly politics in “Heart of Stone” is a big thing; they’re right in the middle of the Cold War and you’ve got some fiercely leftwing Jewish intellectuals from New York, and right across the town there’s a group of John Birchers who are fiercely anti-communist, and then there are some evangelicals as well. All of that’s just to create a kind of an atmosphere where you get some good conflict among different people. But my background in academics, I mean, it’s going to show up through Ellie to a degree in all of the books, but it’s most prominent in the first one, “Styx and Stone.”

A: Well, I do like the nostalgia for earlier eras, and I settled on that particular time, the very early 1960s, because of a plot point that I needed in … “Styx and Stone.” And I needed it to be about 15 years away from World War II. So that’s why I picked the exact date. I mean, it could have been 1968; it could have been 1962, but then it might’ve been a little too close to the war. I needed it to be about 15 years to create just enough fog of memory but also the feelings — the memories are certainly still strong, but they’re beginning to get a little bit misty and foggy after 15 years. And it’s one of the major subplots of the book “Styx and Stone,” about a couple of men who were concentration camp prisoners during the war. I also wanted to pick that era because it was before feminism, and it was before the sexual revolution, and I thought that that was very interesting to put a character into that situation. I mean it’s one thing in 1972 or 1973 to say that “Oh, young women were out in the workplace and they were sexually active or dating different people or not settling down right away.” But it’s quite another thing to do it in 1960. So it makes Ellie kind of stand apart, and that’s the way she wants to be. And I want her to be that way because I’m very interested in challenging a lot of the stereotypes in the crime-fiction genre about women and about men. You know, it’s OK for the male detective to fall into bed with a woman, but God forbid the female detective [does] that. So that’s what I wanted to kind of explore those commonplaces and just have some fun with it.

Q: Do you find that those stereotypes still hold true in crime fiction today?

A: I think they do, believe it or not, among readers at least. I get a lot of questions from people who say, “Oh, I love Ellie, I love these books, but does she have to drink so much?” or “Does she have to have sex with so many [men]?” It’s not so many, but it does occasionally happen in the books. And others have asked me, “When is she going to settle down? She needs to meet a nice guy.” And I just think, man, that’s kind of old-fashioned. I mean, Ellie doesn’t feel that she needs — you’re never going to see it on the page, but I mean, she doesn’t need a man to define her, to make her complete. She wants a career; she wants to do something for herself. So I’d say yes, today, even today, people still expect the female, if she does anti-social things or things that aren’t traditionally thought of as being a “good girl,” you know, they’re not necessarily happy with that.

Q: So why did you choose to work on a crime-fiction novel?

A: I think I’ve always — well, I’ve always enjoyed reading mystery novels, and I’ve read basically the whole canon, from Arthur Conan Doyle to people who are writing today, people that I meet all the time at conferences and have become friends. But I remember really getting into … a lot of the mysteries written in the golden age of crime fiction, so Agatha Christie, Dorothy L. Sayers — Dorothy L. Sayers, by the way, was also a Dante scholar and wrote quite a bit on “The Divine Comedy” and even did a verse translation, at least of “Inferno” … At any rate, I discovered the great American writers, like Dashiell Hammett, James M. Cain, Raymond Chandler. And later still, the more modern writers, like Sara Paretsky and Sue Grafton. And kind of strangely enough — I mean, he was a great writer but not as well-known — it was in the 1990s, I was reading the Dick Francis novels, and his books are all set around the horse-racing world and in England, and I just loved them and said “I would really like to write books like this.” It was an amateur detective, but it wasn’t cozy and feel-good — you know, it was kind of gritty and realistic. He wrote with steeplechase jockeys, usually, as his amateur detective. … He picked steeplechase because those jockeys are much larger than the jockeys that ride the Thoroughbreds, so it’s a little more believable that he could be this tough-guy detective. So maybe he’s 5’6” or 5’7” … so he’s not going to be 5’2” or 5’1.” But the Dick Francis books I really enjoyed, and along with the others, and I decided I’d like to try this. So I wrote a couple of books back then, managed to find an agent with them, but never got them published. And then went back to it years later, started all over again, and that took about six years. But so crime fiction, it does appeal to me for a lot of reasons: I love the structure of it; you know, you start with a wrong that needs to be righted or a mystery that needs to be solved, and I do enjoy that structure. And so-called literary fiction is — that’s great, but it doesn’t hold the same attraction for me as a genre because it’s a lot looser, and basically I guess a lot of things can fall into the literary thing. Even some crime-fiction people sometimes say “Oh, this book transcends the genre.” But I love the genre, and I love trying to make right triumph over wrong — you don’t want to be too hokey about that and always make it crystal clear. I like a little murkiness and a little edge to it and ambiguity at the end of some stories. But you do want the readers to be left satisfied, and that’s what mysteries tend to do, because you solve the crime and then people say, “Oh, that was clever,” or “I didn’t figure that out.” … I mean, that’s the ideal world. In the worst of all worlds, you would say, “The author tricked us, didn’t play fair, [it] was stupid.” But obviously that’s not what we look for when we write mystery.