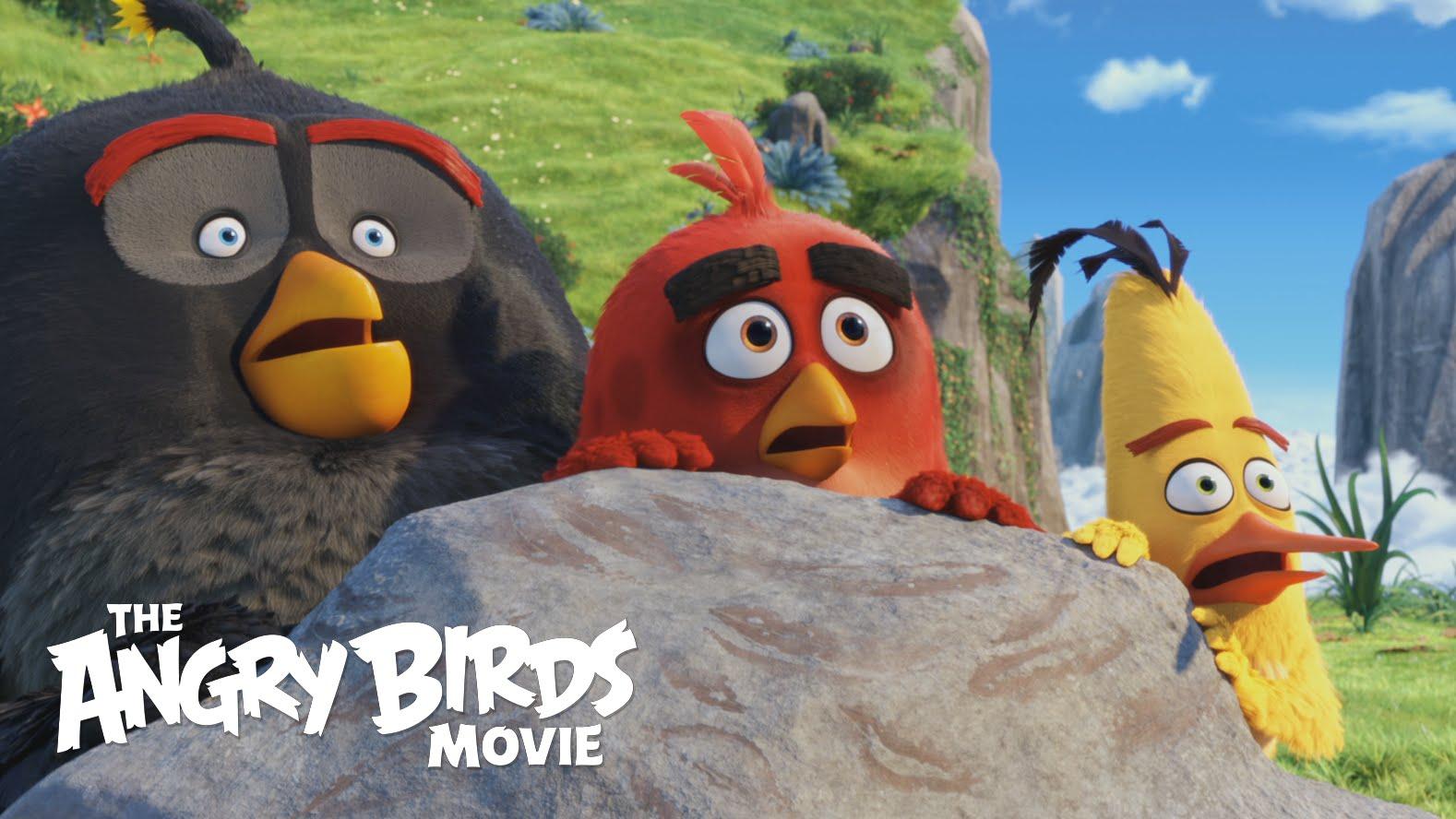 Long gone are the glory days of the friendly neighborhood pigeon. We now live in the age of the red bird, blue bird and boomerang bird — the Angry Birds. Once an unavoidable mobile game, the franchise is flying back into the pop culture consciousness with an animated movie. Written by “The Simpsons” writer Jon Vitti and voiced by a flock of hyper-talented comedic actors, “The Angry Birds Movie” is taking aim at the box office and shooting for the crown. To learn more about the film to be released May 20, the UCSD Guardian took part in a wacky and informal Q&A session with yellow bird Chuck and white bird Matilda themselves: Josh Gad and Maya Rudolph.

Molly Cohen, University of Cincinnati: How has working on “The Angry Birds Movie” changed the way you look at apps and technology?

Josh: Apps are what you download on your phone.

Josh: Nope. It’s actually changed my view of both. I no longer order appetizers that have a bird in it because of our movie. But in terms of apps and technology, I’m not gonna lie: Making the movie hasn’t changed my view at all. I still like downloading apps. I actually wound up getting into the Angry Birds game long before I started working on the film. I was on the set of “Wedding Ringer” and as a way to get away from Kevin Hart, who was a little overbearing, I became addicted to Angry Birds because I needed an outlet.

Maya: I was told by my good friend Andy Samberg — if we’re gonna just keep dropping names — that he was the first person that ever played Angry Birds. And I said, “What are you playing?” And he said, “Don’t start; you’ll get addicted.”

Josh: I was told by my close-ish friend Barack Hussein Obama, in, I want to say, 2009, that he wanted me to come play Angry Birds with him.

Shannon: What makes “Angry Birds” different from other animated movies? More specifically, what makes it unique and what aspects of this film will bring the audience in?

Josh: Well, to answer your first question, what makes it different, in my opinion, is that it is one of the funniest movies — animated or otherwise — that you’re gonna see this year. They assembled one of the most all-star comedic casts I have ever seen put together. You have everybody from Maya to Kate McKinnon to Bill Hader to Keegan-Michael Key, Danny McBride to Joel McHale — I can keep reading off this list. And, of course, Josh Gad.

Maya: I actually thought that you memorized everyone’s names and I felt really bad for myself, but then I just realized you’re reading the poster.

Josh: So you have this amazing eclectic group of comedic forces and it’s one of those movies that, like we said, appeals to pretty much every demo. So there is plenty for kids to laugh at, but also for the people who take the kids or go without the kids. In your case, I would hope that most of the students at Penn State don’t have children, but if they do, that’s great, god bless. In the vein of “The Lego Movie,” in the vein of “Zootopia,” you’re going to laugh nonstop.

Maya: I feel like that’s kind of the language of animated movies at the moment and I feel like our generation is making the movies now. We’re a good, funny, astute, [and] aware generation that knows you want to hook in kids, parents, adults and everyone. How old are you? I think I must be older than you because I think I’m Generation X.

Maya: If you still fit in American Apparel clothes, does that count? What about Brandy Melville?

Josh: Yes, now you’re speaking my language. I actually look better in Herman Melville, the author. He has a line at Nordstrom for bigger people.

Maya: I was going to say, I got involved truly because of this cast. When I saw this cast — no, thank you. Thank you. That’s it.

Ashley: With this huge all-star cast, you guys are all funny and insanely talented. Was there a lot of improvising that went on when you were recording your lines, or did you mostly just stick to what the script said?

Maya: I can only improvise and repeat back to people what they said to me.

Josh: That’s always very difficult. They have to give her an ear piece and they have to believe in her.

Maya: We did a lot of believing.

Josh: We did; we improvised nonstop. Part of the beauty of animation is you get a microphone and two hours of play. There is no wrong version of what you do. You just get to go off.

Maya: And I went off. Did you go off?

Maya: No, improv goes off.

Maya: I feel like what’s nice about this kind of improv — which is completely different from the kind of improv you do onstage with a group of people — is you can’t focus simply on the sound of your voice. You really finesse the character pretty deeply in a short amount of time because it’s solely concentrated on the voice. You don’t have to worry about your body language. Although, do you worry about body language?

Josh: I do worry about body language because when you have a character as physical as Chuck, it just kind of organically happens. If you’re standing still and you need to speak fast, it’s not going to come out properly.

Maya: Can I ask a personal question: what was your body language for Olaf? Was it lower?

Josh: No, the way into Olaf was, I just did a kid, like this naivete. It was a very childish sort of attitude, physically, that I had. But it’s really none of your goddamn business how I did Olaf.

Maya: I knew you were going to say that.

Josh: What was your approach to the “Big Hero 6” mom? By the way, I love that movie.

Maya: I love that movie too.

Josh: But we love “Angry Birds” the most because that’s the movie we’re promoting. I got your back, Sony Pictures.

Maya: I forgot because I don’t know how to read.

Maya: No? But there are a lot of birds in “Bridesmaids.”

Josh: No, this is an animated movie about birds.

Jacky To, UCSD: Angry Birds is a game that kids love and now there’s a movie based on it. So are there games from your childhood that you would want to make a movie out of?

Josh: I wanna do a Contra movie.

Maya: Do you wanna do Kubert?

Josh: It’s called “Pixels” and it didn’t work out.

Maya: What about Donkey Kong?

Josh: Again, have you seen my last film? We’ve done all this. You know what movie I’d love to be a part of, honestly? I feel like Super Mario Bros. deserves a movie. They did a movie, but it was terrible, awful. It was a live-action movie.

Josh: It was with John Leguizamo, Dennis Hopper, and — oh, what’s his name? — one of my favorite actors from “Who Framed Roger Rabbit?”

Josh: Yeah, Bob Hopkins. So that would be awesome to do, like a really genuinely great Mario Bros. movie.

Josh: It could be either. I tapped out the video game market. This is my swan song until the inevitable call comes for Minecraft adaptation, where it’s just gonna be me building things for two hours.

Maya: What if somebody was like, “Hey, we’re kind of doing like a spin-off of the ghosts from Pac-Man and like why they eat what they eat.”

Josh: Again, this is a movie called “Pixels.” I would encourage you to rent this movie.

Maya: What about “Centipede”?

Josh: Okay, we’re going to get off this. Clearly, Maya needs an education in my filmography.

Josh: Nope. Been there, done that.

Josh: Again, you need to go home … If any of these answers disappointed you, this has been Danny McBride and Bill Hader.