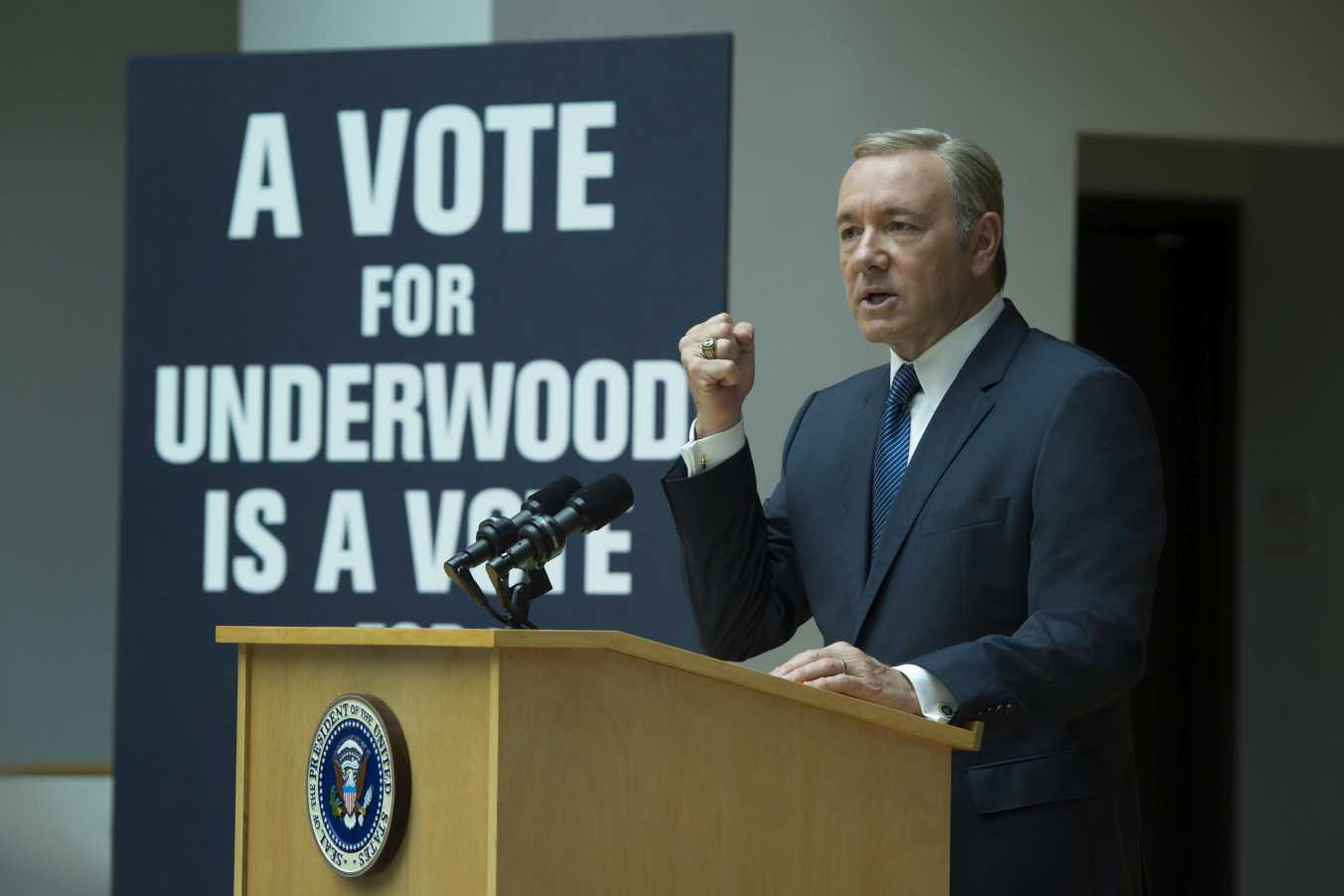 Politics, as Frank Underwood explains, is no longer theater — it’s show business. This year, the Underwoods put on their best show yet. While Season 3 delved into the Underwoods’ emotional backgrounds and marriage, giving depth to the characters, Season 4 pivots back to the formula established in Season 1: the Underwoods react to various political onslaughts and use Machiavellian politics and manipulation to come out on top. While this season is overly reliant on this formula and begins to feel repetitive, these political battles are what makes “House of Cards” gripping. And with all eyes on both the GOP and Democratic primary elections, “House of Cards” couldn’t have picked a better time to return. Due to its smart writing and strong performances, the show is even more entertaining than the real-world political drama unfolding today. It’s good to be back in Washington with the Underwoods.

Picking up right where it left off, Season 4 begins with Claire (Robin Wright) leaving Francis (Kevin Spacey) and Heather Dunbar (Elizabeth Marvel) in the lead. This season, starting with the first episode, finds Frank Underwood at his most vulnerable. His presidency is a house of cards, built on hypocrisy and casualties. And, if the first three seasons are the house being built, the latest season is the house falling apart. Nonetheless, Frank Underwood is master of the political game and willing, as always, to do anything. He is still eager to share his wise musings with the audience, all of which are slick and intriguing.

Just like in politics, characters in “House of Cards” come and go. Season 4 sees both a plethora of new faces as well as several familiar ones. Raymond Tusk, Lucas Goodwin (and other former journalists) and Thomas Yates all enter back into the fray. Also returning this season is Viktor Petrov, one of President Underwood’s most formidable opponents. His Russian accent and manipulative rhetoric make him impossible to turn away from. Season 4 also sees the addition of new characters such as Leann Harvey, a political consultant portrayed by the talented Neve Campbell, which makes for an exciting start to the season.

One of the great strengths of “House of Cards” is its writing. Although it is a glorified Washington D.C. soap opera, it is nonetheless saturated with biting dialogue, complex manipulation and political intrigue. Only a politician can say if the show accurately reflects politics, but the writing of the show is enough to fool anyone. “House of Cards” embodies its own political world while mirroring the real national politics of today. The topical issues of campaign finance, gun control and terrorism in the Middle East are expertly interweaved into this story. This grounds the often contrived narrative in reality and provides the show with a needed sense of authenticity. Season 4 even takes place during a presidential election cycle, which hits close to home. But “House of Cards” builds its own world with its own issues, and it is the writers’ attention to detail and forward-thinking that makes this world come to life. “House of Cards” moves quickly and involves many characters with unique motives and agendas. The story is often a step ahead of the audience, but playing catch-up is part of the fun of “House of Cards.”

“House of Cards,” by its nature, is episodic. The show, which is designed to be bingewatched, is a series of dramatic events accompanied by one political battle after the other. This is a formula set up by Season 1 that the new season doesn’t stray from. There is a plethora of odd moments, sexual politics, political journalism and ruthlessness from Doug Stamper (Michael Kelly). While these are sure to happen in “House of Cards,” they start to feel formulaic and repetitive. Other aspects of the formula, however, have been improved this season. The show delves into more political issues and the stakes are higher than before, given the election and Frank’s vulnerability. This season also ramps up the role of Claire Underwood, who comes into her own, manipulating the political machinery and playing its game. It becomes clear that Frank needs Claire on his side. Not necessarily as a wife, but as a political partner.

The first season of “House of Cards” established a pathway to reckless abuse of power and unavoidable consequences. The Underwoods, like the show about them, have climbed to power by sticking to what it knows best: ruthless pragmatism, power, manipulation and deception. Season 4 uses its formula to tell a grand political narrative that is difficult not to binge watch.