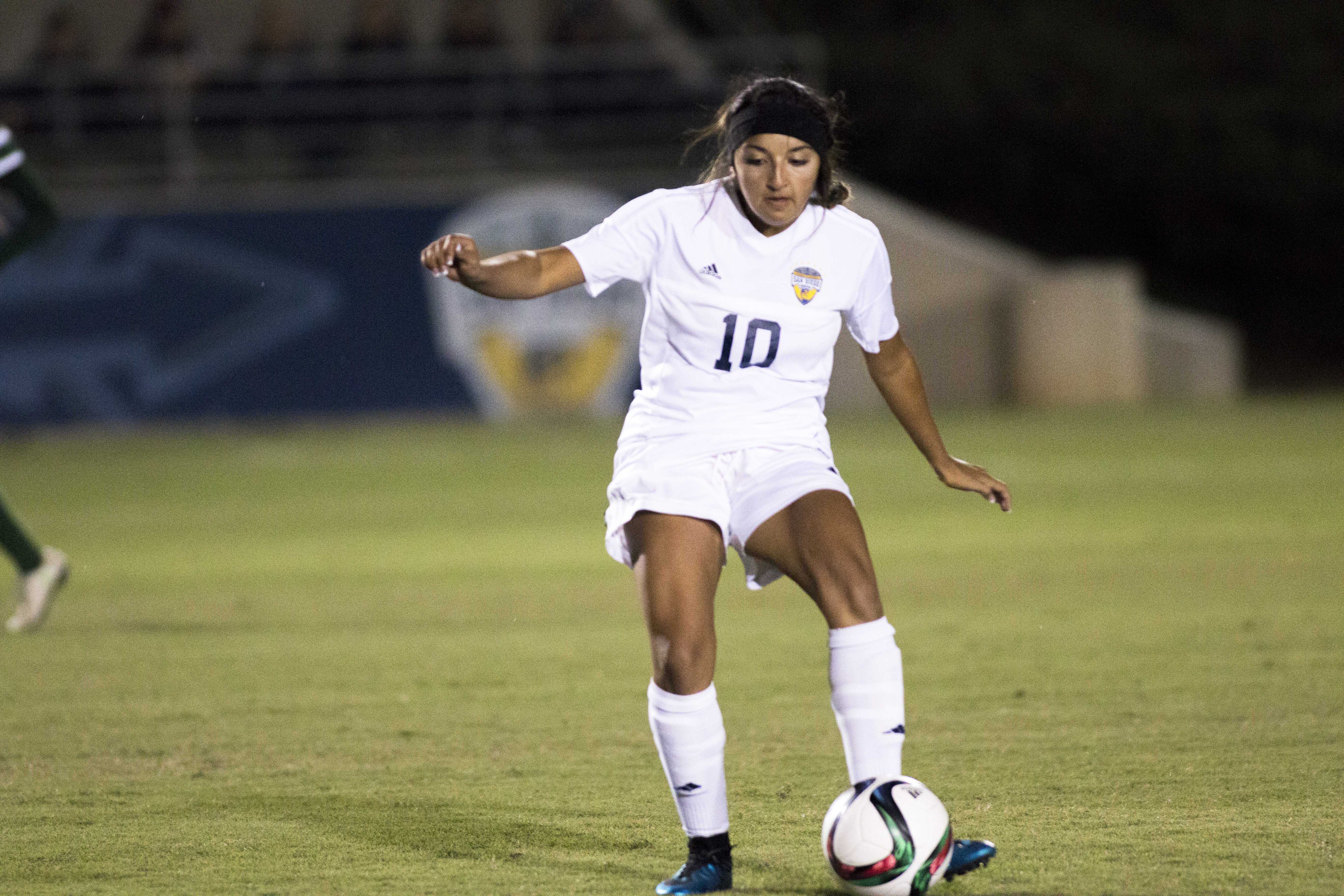 Just days after winning its record ninth California Collegiate Athletic Association title, the UCSD women’s soccer team fell in a heartbreaking 2–1 decision to Seattle Pacific University in the first round of the NCAA Division-II Championship last Thursday night. Despite battling through heavy rain and 30- to 40-mile-per-hour winds for the duration of the contest, the Tritons came up just short in several attempts on goal, ultimately ending their strong 2015 campaign. Their record stands at 15–6–1 overall.

“We came in very confident,” UCSD Associate Head Coach Kristin Jones told the UCSD Athletics Department. “Not cocky by any means but very confident and very proud of the way we’d been playing over the last couple of weeks and still riding a bit of a high from the CCAA championships. It is disappointing, but I know deep down that every kid left everything they had out on that field.”

The Falcons struck first: With the wind at her aid, senior midfielder Laura Moore fired a corner kick straight into the back of the net in the 19th minute to push her team to an early advantage. Seattle Pacific then proceeded to out-shoot UCSD by an 11–1 margin on the half.

The tides seemed to turn in the second half. The Tritons now held the wind advantage — within minutes of the start of the half, junior midfielder Kiera Bocchino sent a left-footed shot just high of the mark to put pressure on the Falcons. Sophomore midfielder Elisa Martinez followed up with two strong efforts of her own, one of which was narrowly deflected by Seattle Pacific sophomore goalkeeper Molly Stinson. UCSD ultimately out-shot SPU 12–4 on the half.

The Falcons mustered some strength again in the 50th minute when senior midfielder Isabel Farrell hit the target off a cross from junior forward Hannah Huesers, posting the critical insurance point for Seattle Pacific.

The Tritons attempted to battle back late in the match but fell just short of the comeback. Bocchino tapped in a close-range shot off a corner kick from sophomore midfielder Jordyn McNutt in the 84th to narrow the deficit to one, but a last-ditch effort to equalize in the final seconds of the game came up shy of success.

UCSD senior starting goalkeeper Kelcie Brodsky, who has played that position since her freshman year, walked off the field after her last collegiate contest with 28 career shutouts and a school-record 386 saves; she posted 101 stops in her final season as a Triton.

“I want them to reflect on what it took to get to this point,” Jones said. “They came on really strong at the end of the season and through the CCAA Tournament. Yeah, we can feel sorry for ourselves in the moment, but I want them to remember the taste of this defeat and not want it to happen again.”

The Tritons are now 23–10–3 in their 13 NCAA Championship appearances and 3–3 in NCAA tourney games against Seattle Pacific. Despite the loss of star goalkeeper Brodsky, the Tritons will have a strong group of returners on the field to vie for the championship crown in their 2016 campaign.