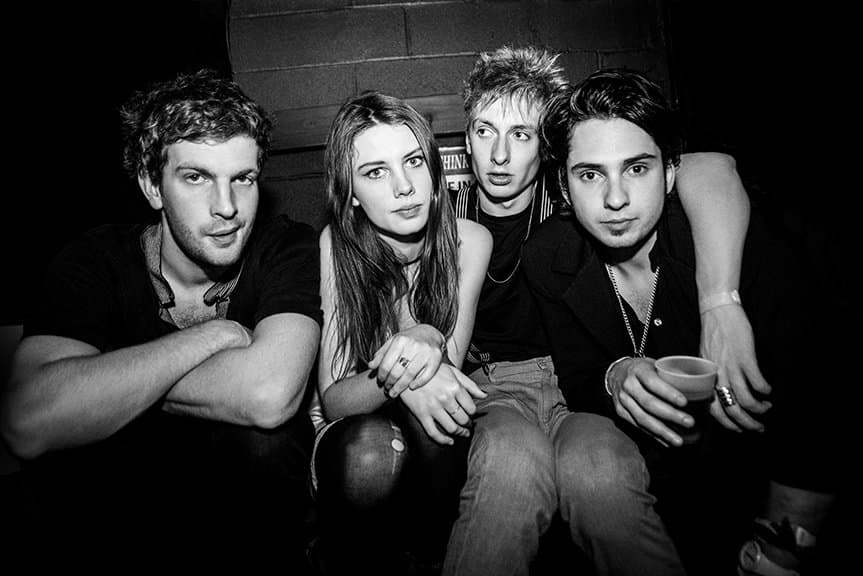 Wolf Alice delivers a divine mixture of grunge and guitars for an energetic San Diego performance.

The Irenic is nearly indistinguishable: A modern, well-manicured church, whose Sunday services were only recently exchanged for amps and pop-up bars, sits nestled in a quiet North Park neighborhood. And though the drummer from Drenge — the second opening band for headliner Wolf Alice — began to hold a faux service halfway through his set, those who showed up to church on Oct. 12 were not there for religious reasons. Or perhaps they were, only they sought salvation in the form of grungy guitar riffs and glorified restlessness. And surely Wolf Alice’s cathartic, emotive shrieks and crashing drums brought a sense of divinity to the historic church, gutted of its pews but filled with fans anticipating a less conventional service.

The line of people extending from the doors of The Irenic was a display of black-clad teens and classic rock junkies, all being prodded to pose with paper wolf-masks by an enthusiastic radio station representative. But Wolf Alice didn’t need the quirky pre-show props or the charmingly historic church to accentuate a refreshingly raw performance. When Ellie Rowsell took the stage and began strumming a bare, black guitar, the audience fell silent, entranced by the intensifying riffs to “Your Love’s Whore.” Only when she began to coo, “Don’t you want to take time and get to love me/ We could build a perfect world” did fans come out of their trances, breaking into a chorus that only grew louder with the nostalgic single “Bros.” As Roswell reflected, “I’m so lucky, you are my best friend/ There’s no one who knows me like you do,” a group of women in the front row entered into an ostentatiously sentimental five-person embrace: a fitting tribute to Wolf Alice’s exceptional ability to craft songs that resonate.

Opening bands Made Violent and Drenge brought similar sounds to a stage crowned by a centered drum set, both pairing growling vocals with shrieking guitars to craft boisterous energies. The stage grew emptier with each set until Wolf Alice strutted onto a spacious scaffold ideal for the rowdy spasms of their glitter-adorned bass player.

Wolf Alice’s performance was made all the more impressive by its ability to overcome the venue’s faulty acoustics. The vocals were often muffled by overpowering guitars and drums — an unfortunate consumption that lessened the impact of Wolf Alice’s endearingly contemplative lyrics. But the unintentional focus on instrumentation brought a new energy to the fiercer grungy, guitar-heavy songs toward the end of its set. Bangers “Giant Peach” and “Moaning Lisa Smile” encouraged the audience to jump, pulsing with the animated riffs and deafening drums.

Shortly before its savory encore, Roswell purred, “Are you happy now?” toward the end of the introspective, slower-paced “Blush.” A man in the crowd spat back, “Yes!” to a roar of applause: a fitting nod to a powerful sermon.