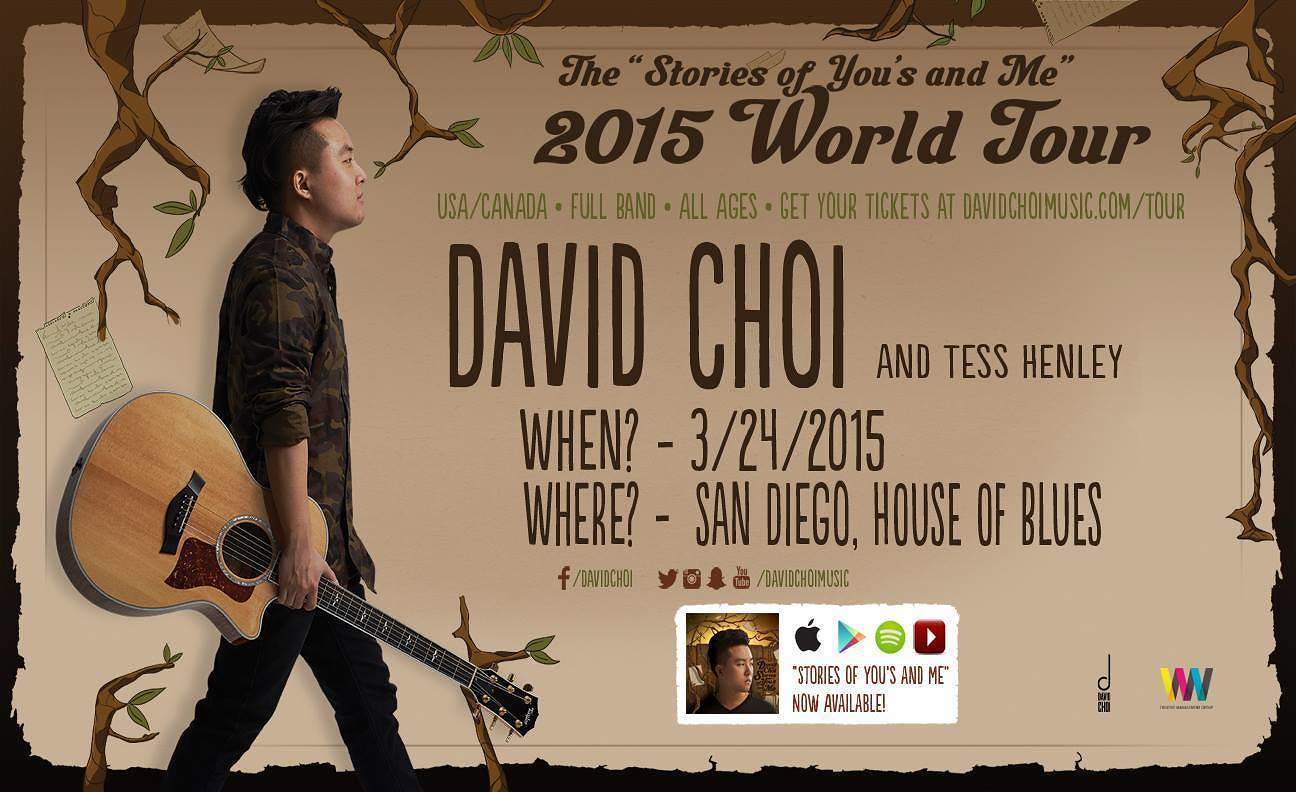 Singer-songwriter David Choi is a Los Angeles native whose voice has been heard on multiple television shows and across YouTube with nearly one million subscribers. Choi’s three iTunes albums — “Only You”, “By My Side” and “Forever and Ever” — have his self-described style of “poppy with a hint of jazz and folk.” Having performed his original songs and covers around the world, David is excited to share his music with more people. Choi recently kicked off his 2015 World Tour in California. On March 24, he will be performing in San Diego at House of Blues. The Guardian was able to ask Choi a few questions while he’s on tour, here’s what he had to say. More information on time and tickets in the link below.

Guardian: You posted the humorous “YouTube love song” on YouTube several years ago that brought you this “overnight” fame — what factors do you think helped you achieve this?
David Choi: Well, besides the fact that there were a few musicians on the website at the time, I think people enjoyed it and could relate to it. Funny thing is, YouTube became more my life than when I wrote the song.

G: Is there a singer or musician whom you relate to the most?
DC: Musically speaking, maybe Jason Mraz? I only say that because that’s how people describe my music. I would say that I could relate to a lot of the independant musicians out there who are grinding and trying to sustain a career in music.

G: Correct me if I am wrong, but I heard that when you were a kid, you did not enjoy being required to practice the piano and violin by your parents, but later you found that music was something you were not only comfortable doing but good at as well. Is there anything you’d like to say to kids who might be in the same situation you were in? Or to their parents?
DC: Correct. I hated practicing violin and piano. To the kids, I say find an instrument you like and ask your parents politely to let you play the instrument and that you’ll do your best in it. Parents, let your kids try out whatever instruments they want and if they fancy a certain instrument, give them a chance to explore it followed by the discipline of practice to hone their skills.

G: Your music video production is remarkable (By My Side being a personal favorite). I see that you have been working with UCSD alumni group Wong Fu Productions. How is your experience working with them? Anything particular that you’d like to share?
DC: My experience in working with them was great. They were first my friends. When working with friends, it brings in a fun element, but also an openness that you wouldn’t get from others. Example, when I wouldn’t smile genuinely during my MV shoot, Phil who was directing would point that out and say “SMILE FOR REALS” and I’d totally understand. It helps.

G: Earlier portrayed by fans as a poker-face person, you promised that you would not smile until you reached 77,777 subscribers on YouTube. What an interesting campaign! Can you tell me more about your inspiration of doing this?
DC: Well, I was already not a smiley person and I’d see comments from fans telling me to smile more. Well, of course I didn’t listen and started to not smile in all my videos. Eventually, I couldn’t do it anymore and decided to smile at 77,777 subscribers.

G: Your tour has just begun! You’re going to visit so many cities in the U.S. and Canada — what is most exciting about touring again?
DC: Meeting my listeners and supporters, and most of all, sharing my stories.

Tickets can be purchased here:
http://smarturl.it/DavidChoiSD2015