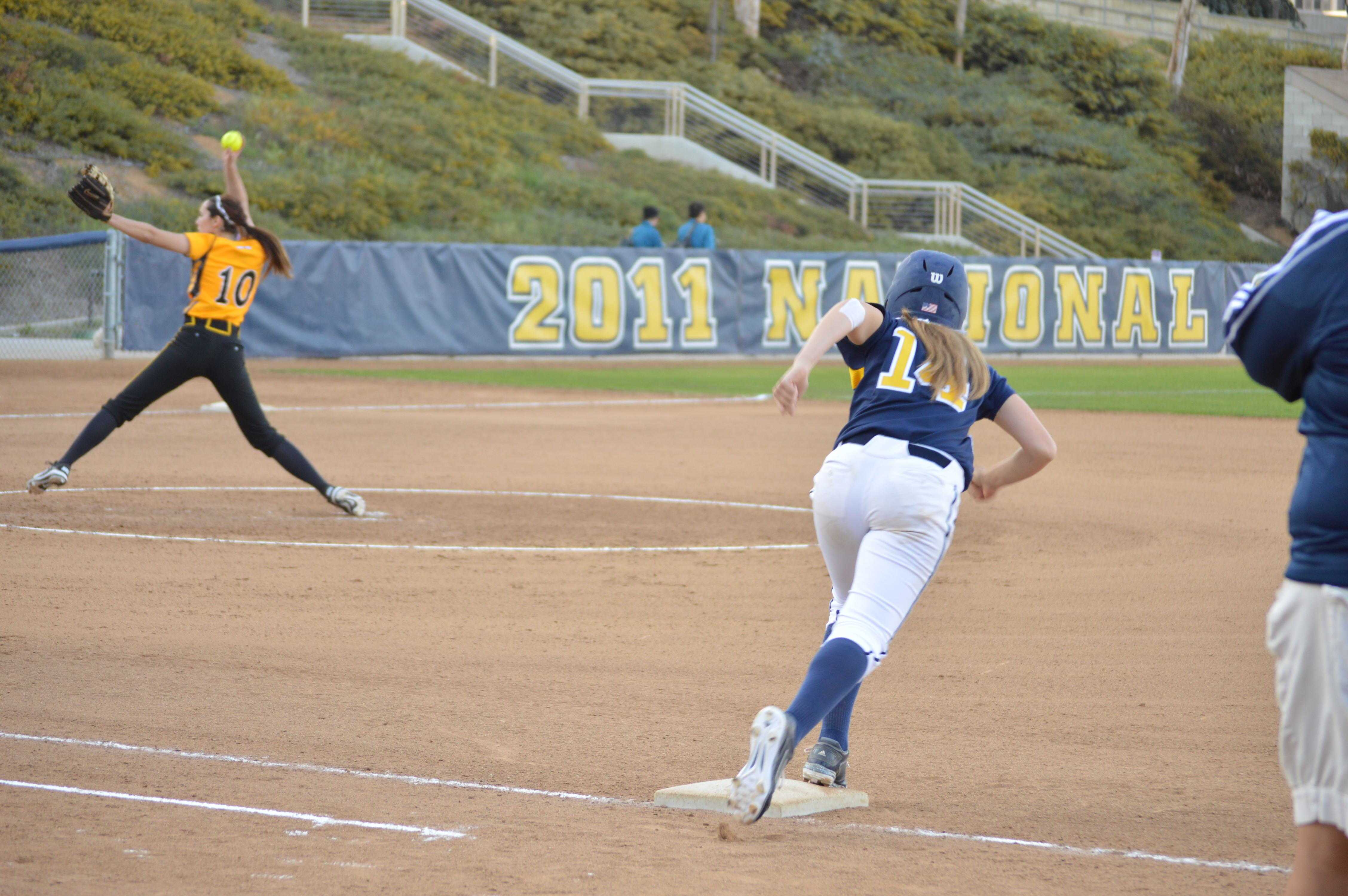 Tritons steal one game on the road against No. 3 Cal State Monterey Bay but end up losing three out of four contests.

In their second road series of the season, the UCSD softball team (15–5) headed up to Otter Sports Complex in Seaside, California, where the Tritons were overwhelmed against No. 3 nationally ranked Cal State Monterey Bay. UCSD managed to come away with one victory in game two but fell in the other three contests to one of the country’s top squads.

The Tritons’ record is now 15–5 overall and 8–4 in league play, dropping them to fourth in California Collegiate Athletic Association standings.

In the series opener, UCSD’s junior right-handed pitcher Hannah Duarte walked four consecutive batters in the first inning for Cal State Monterey Bay’s first run of the game. The Otters held onto this lead for four innings, retiring 11 straight batters before Triton freshman outfielder Emily Sklencar broke the streak in the fifth inning with a single down to third base.

A drive to right field by freshman third-baseman Rachel Phillips then pushed freshman outfielder Kendall Baker, who was pinch running for Sklencar, home to even the score at one.

Cal State Monterey Bay responded immediately in the bottom of the fifth inning. After a single up the middle by Otter pitcher Cori Reinhardt, Duarte walked two more batters to load up the bases. A single by center-fielder Anneliese Lopez then sent Reinhardt to home plate. With two outs on the board, Otter first-baseman Madison Casto scored off an error by Phillips, bringing the score to 3–1 in favor of Cal State Monterey Bay.

In the sixth inning, UCSD attempted to mount a comeback. Junior center-fielder Taylor Abeyta got the ball rolling for the Tritons, making it to first base on a walk. A single up the middle by Sklencar sent Abeyta running for home plate, notching up run number two for the big blue.

However, the effort wasn’t enough to catch up with the Otters, as the Tritons failed to plate another run, falling 3–2 in game one.

“Unfortunately, we just walked too many people in that first game,” UCSD head coach Patti Gerckens told the UCSD Guardian. “We did hold our own, though, and it showed us what we were capable of doing.”

UCSD returned to the field in game two with a renewed energy — junior left-handed pitcher Alexis Edwards had a good start and kept the Otters quiet for two innings, shutting down six out of seven batters. The Triton offense came alive in the third inning when junior second-baseman McKenna Clewett’s two-run homer over the fence in left center put them up by two.

“I knew the ball was going out the second it hit the bat, and that’s the best feeling in the world,” Clewett said.

The Otters were unwilling to cede the game yet, however, and countered by shutting down the next three batters in the UCSD lineup. Then, in the bottom of the fourth, Cal State Monterey Bay leveled the score at 2–2 and looked to overtake the Tritons.

UCSD stood strong and secured the win in the sixth inning when a passed ball allowed freshman right-fielder Kelsi Maday to score the third run for the Tritons. A single to left field from sophomore pinch-hitter Bianca Devoto brought Baker home and ended the game on a satisfying 4–2 victory.

“We were disappointed when the games on Saturday got postponed,” Clewett said. “It did give us an extra day to mentally prepare ourselves though which was good.”

Despite having an extra day to recover, the Tritons suffered a crippling 7–1 loss in game one on Sunday. The Otters shut down the UCSD offense for five straight innings, while taking the lead in the bottom of the fourth inning with a two-run homer. Cal State Monterey Bay then recorded four more runs in the fifth and one final run in the sixth.

The Tritons attempted to counter in the top of the sixth with a run, but the Otters had little trouble putting away their second win.

The Otters clinched the series win in the final game with a crushing 8–0 shutout. Cal State Monterey Bay gave up only two hits for the duration of the game, while building up an unbreakable lead. Two runs apiece in the third and fourth inning put the home side up by four, and four more in the sixth ended the game on an eight-run mercy rule.

The Tritons will return home this Friday and Saturday to play CCAA opponent Sonoma State and look to bounce back from the weekend’s losses.