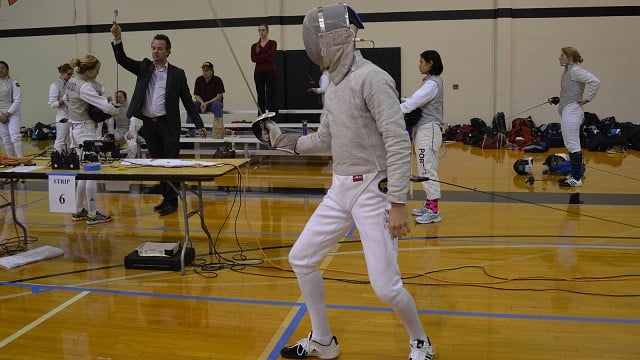 Fencing sweeps all competitors, easily takes top spot for both men and women.

The UCSD fencing team put on quite a show this past Sunday as it continued its dominant performance this season, beating all competitors at the Intercollegiate Fencing Conference of Southern California Duals.

The IFCSC Duals, held at the California Institute of Technology, was comprised of five other opposing teams representing their schools including the University of Southern California, Pasadena City College, UC Santa Barbara, UCLA and UC Irvine.
The matches consisted of contests in the foil, epee and sabre with a highest possible score of nine points in each category, making the matches against a competing school best out of 27 points.

The UCSD women’s squad was able to shut out both Pasadena City College and UC Irvine by a perfect 27–0 score, and the UCSD men’s squad did likewise against Pasadena while winning 24–3 against UC Irvine.

The Tritons defeated all competitors by a large margin of points; competitors only scored six points across all of their matchups.

As a whole, the men’s team’s foils went 42–3, only losing those three bouts to USC. Its epee went on for a record of 38–7 and its sabre went 39–6 overall. Junior sabre Drew Dickinson performed impressively, going a perfect 12–0.

The women’s team’s foils finished off with an impressive 42–3 as well. The women team’s epee also followed through with a 42–3 overall. Its sabre went even farther and won with a near flawless finish of 44–1, losing only a single bout against USC. Junior foil Alina Marshall finished with a perfect 11–0 score and freshman foil Sophia Holmqvist posted a perfect 10–0 score.

The UCSD fencing team looks to wrap up the fall season on a high note as it hosts the annual BladeRunner tournament on Nov. 15 to 16. Matches will begin at 9 a.m. in RIMAC Arena.