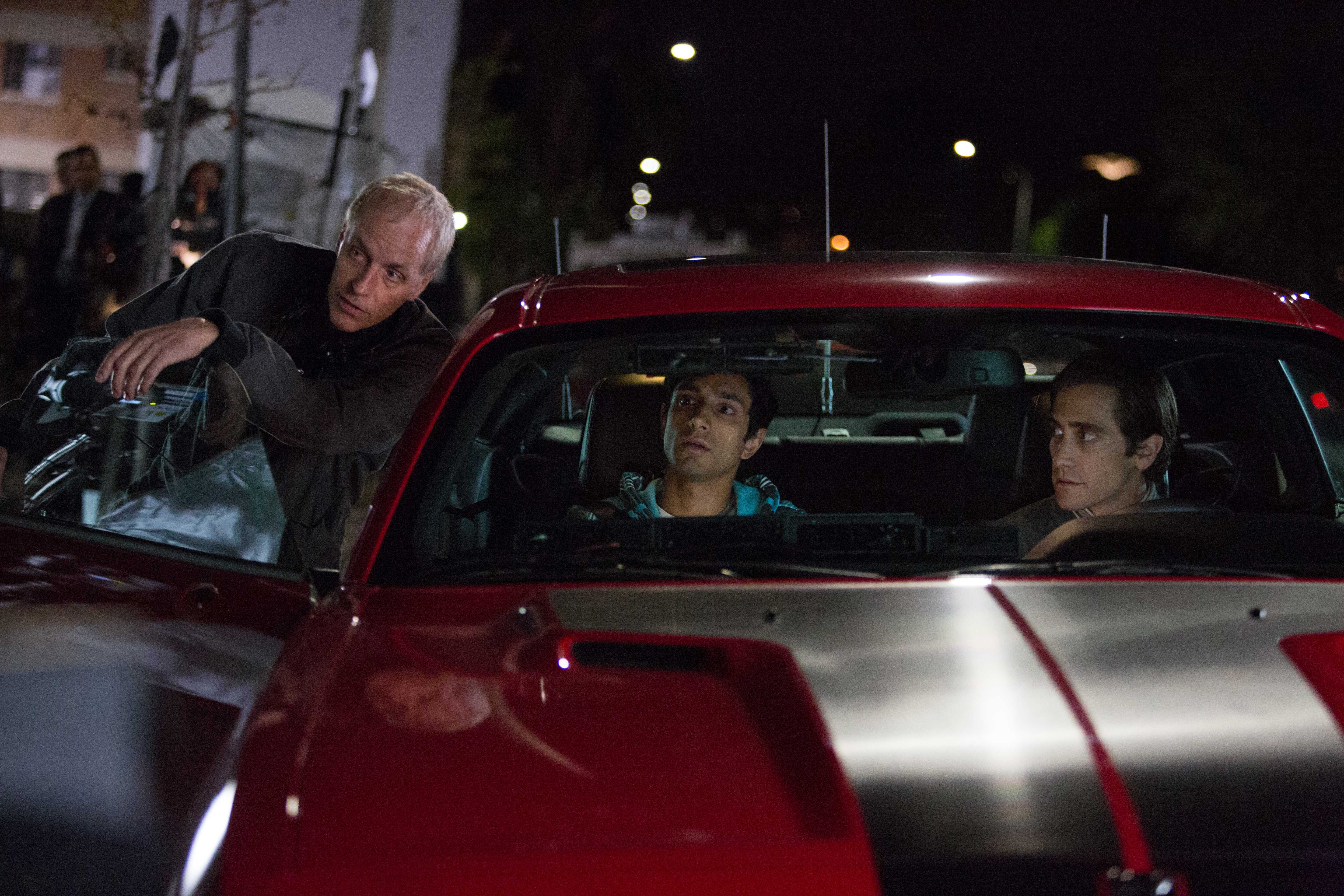 Jake Gyllenhaal expertly crafts an unsettling portrayal of a sociopath delving into a corrupt operation.

When Lou Bloom explodes in a brief fit of rage — violently shaking and shattering his bathroom mirror — in Dan Gilroy’s black-comedy thriller, “Nightcrawler,” the moment is uncharacteristic, terrifying and telling. Indeed, the oily-haired antihero rarely ever expresses believably human emotions, but beneath the creepy, candied smile he flashes throughout the film exists the monster that we truly catch a glimpse of in that shaken reflection of broken glass.

Lou, played brilliantly by Jake Gyllenhaal, is a gaunt loner who scours the streets of Los Angeles at night as a petty thief in Gilroy’s directorial debut. He is cheerful and polite — too much, as we slowly realize — but cannot seem to find a stable job despite his practiced efforts to sell himself as a diligent worker. Soon enough, he happens to witness the immediate aftermath of a fiery car crash and is suddenly sucked into the world of nightcrawling — the high-speed profession of tracking down graphic automobile accidents and bloody crime scenes and capturing them on video to sell to local news stations.

The follow-up is a chronicle of Lou’s rise in his new profitable venture, which simultaneously serves to unravel the very amoral and unsettling nature of the film’s protagonist. As Lou finds more success partnering up with a misfortunate lackey (Riz Ahmed) and making deals with a local news director (Rene Russo), who is shady in her own right, he goes beyond the extra mile to get the video shot — he begins to tamper with the crime scenes themselves. In between are showcases of Lou’s delightfully disturbing behavior, as Gilroy constructs Lou in such ridiculous terms that the protagonist’s oddities and the unnatural exchanges he has with others have the dual effect of hilarity and horror. At its heart, “Nightcrawler” is a twisted and sardonic portrait of a sociopath, with each sickly detail gradually rendered from the ethical tailspin that is Lou’s budding career.

Gilroy (screenwriter for “Two for the Money”), who also penned the screenplay, proves himself to be a capable auteur, tackling a unique narrative and crafting an equally funny and horrifying character study. Paired with the capable eye of cinematographer Robert Elswit (“Magnolia,” “There Will Be Blood”), Gilroy manages to create an entertaining and frightening impression of a serial killer out of the man documenting the crimes rather than committing them.

However, the true star, of course, is Gyllenhaal in what is the finest performance of an impressive career. Shedding 30 pounds for the role, Gyllenhaal quickly erases the memory of his typically suave and handsome appearance as he completely immerses himself in the role, looking emaciated and acting insane. Gyllenhaal finds the perfect balance of the nuanced character, masking Lou’s unhinged nature in an artificial grin while constantly communicating in language that seems lifted from the salesman script of a personal empowerment seminar. The result is a man whose eeriness makes us laugh but always with a tinge of discomfort and nervousness.

“Nightcrawler” is thrilling, darkly funny and disturbing and driven by one of the most engrossing characters in cinema’s recent years. Lou Bloom is a monster, an alien, an enigma, an American psycho.

“I’m a quick learner,” Lou echoes throughout the film and we can only fear how true that may be.