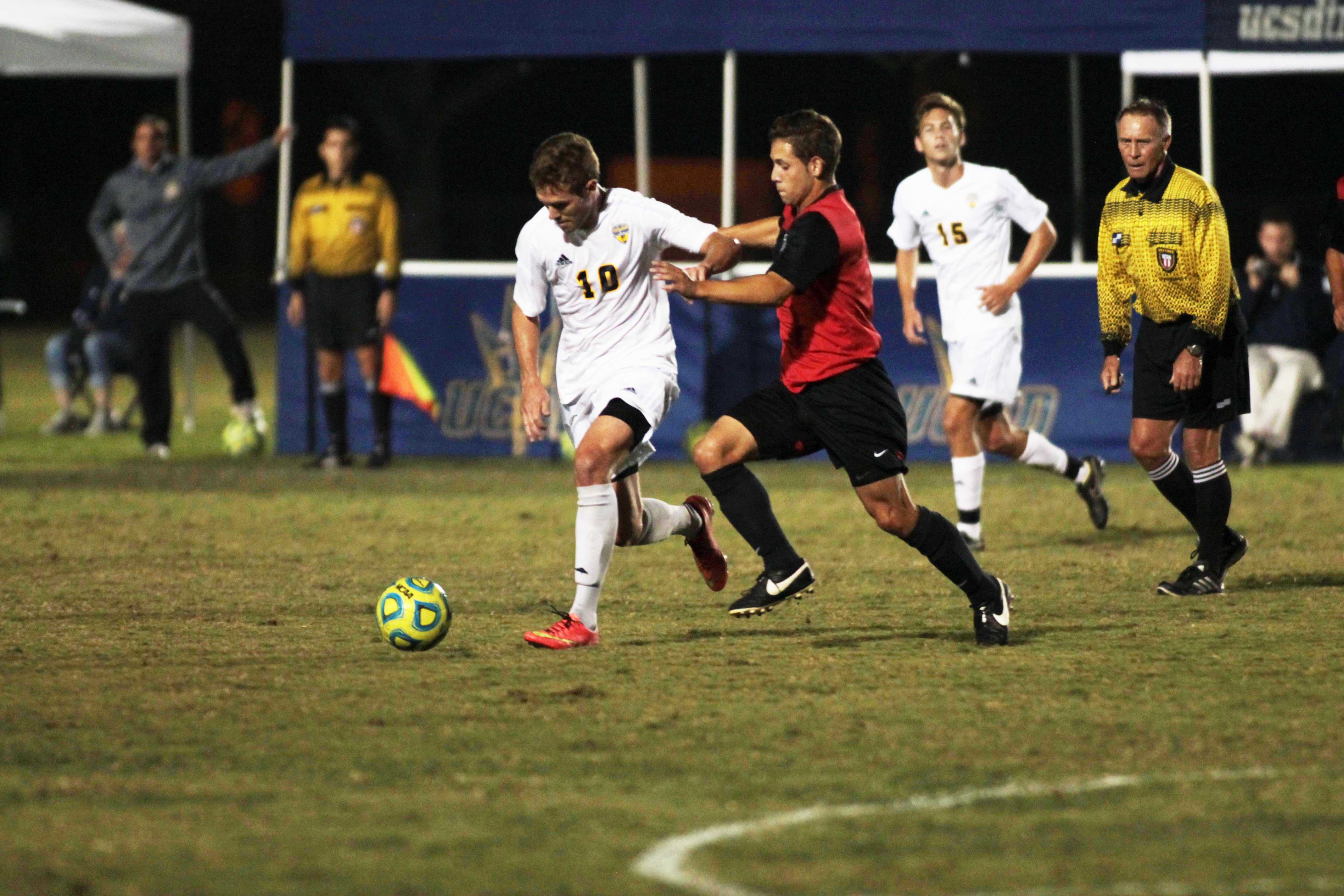 Facing off against two difficult in-league fixtures, the UCSD men’s soccer team concluded the weekend with respectable results. The Tritons matched evenly with both their opponents, drawing 1–1 with Sonoma State University on Friday and 2–2 with Humboldt State University on Sunday to put them on the brink of a postseason berth.

The Tritons opted to start Friday’s contest at Seawolf Soccer Field with inexperience up front as freshman striker Uly de la Cal made his first collegiate start alongside sophomore forward Sam Palano. Fellow freshman and winger Sean Pleskow slotted home for his third goal of the season in the 27th minute to put UCSD up 1–0. Senior midfielder Brandon Bauman aided Pleskow for his team-leading seventh assist of the season.

However, the lead lasted a little over 10 minutes as the Seawolves struck back with a penalty from sophomore forward Cedric Didane in the 38th minute of play. Both squads concluded the first half with the 1–1 score that would remain unchanged for the remainder of the match.

The second half proved to be a relatively dull affair, with both teams exchanging four shots between them. Extra time failed to produce a win for either side, though both bordered on success multiple times. Freshman midfielder Zachary Lagotta came close for the Tritons with a skillful solo run that ultimately failed to produce a finish. While Sonoma State had two late crossing opportunities, junior goalkeeper Cameron McElfresh dealt with them easily.

“Our guys fought really hard, and it was a great team effort,” UCSD head coach Jon Pascale told the UCSD Athletics Department. “Everybody pitched in and did their job and we [ground] our way through it. I give the guys a lot of credit for hanging in there.”

UCSD’s game at College Creek Field against Humboldt State University on Sunday was a hugely contentious game which featured a whopping 46 fouls, eight yellow cards and a red card for the home side.

It was Humboldt State University which drew first blood on the scoreboard when junior forward Ryan Connor headed the ball in from a corner with 28 minutes gone.

It was not until the end of the second half that the Tritons managed to equalize with their first score, setting off a chain of scores during the frenzied final minutes of the match. In the 81st minute, Bauman’s free kick was redirected by sophomore midfielder Riley Harbour into the path of sophomore defender Kuba Waligorski, who netted his second of the season.

The equalizer was quickly eradicated nearly six minutes later when substitute junior forward Chris Pitts skillfully lobbed the ball over the advancing McElfresh to regain the lead for the Torres.

However, the drama continued as UCSD capitalized on a man advantage after Humboldt’s Connor received a second yellow card. The Tritons constructed a near-replica of their first goal, as Harbour again redirected a free kick from Bauman to tee up Uly de la Cal for his first goal of the season. The clutch strike brought the game at a 2–2 standstill in the 89th minute of play.

“Humboldt is a very tough school to play,” Pascale said. “They had a pretty good team and a pretty rowdy crowd. Our backs were up against the wall [for] a lot of that game, so I give the guys a ton of credit for just sticking with it and coming away with a good result.’

The weekend’s results leave UCSD 9–4–4 overall on the season and 4–2–4 in the conference. The Tritons now sit in fourth in league standings, safely within the postseason qualifying bracket of the top six teams.

After four games on the road, the Tritons return home on Thursday, Oct. 30, to face Cal State Dominguez Hills in the final game of the regular season. With a draw, UCSD will clinch a playoff berth in the California Collegiate Athletics Association Championship, while a win would ensure a home field advantage in the first round of the postseason tournament.

“Both teams need to win,” Pascale told the UCSD Guardian. “Dominguez is a really good team. Every year, they’re one of the top teams so it will be great to play them at home and hopefully have a great performance.”